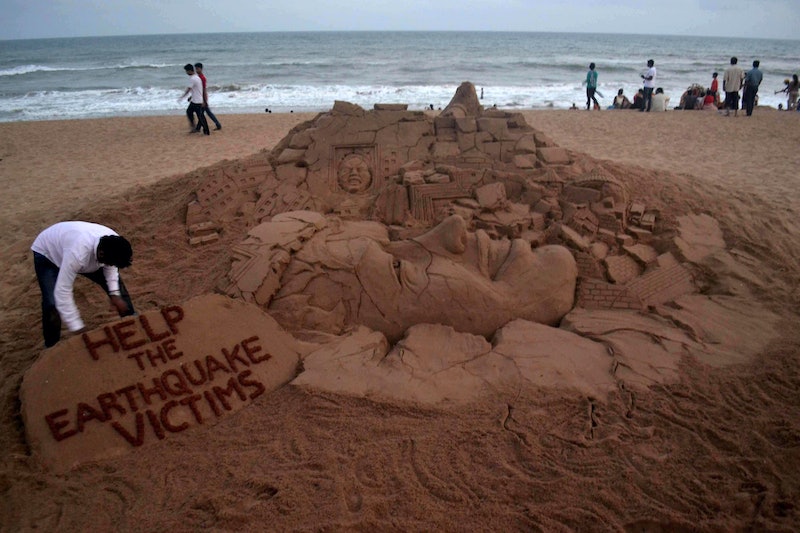 A 7.8-magnitude earthquake ripped through Nepal on Saturday, devastating the region, killing at least 1,000 people and injuring thousands more. The earthquake and its dozen aftershocks could be felt in western India and at the base camps of Mount Everest, the latter of which endured a deadly avalanche. According to local media reports, dozens of buildings, including historical landmarks, in the Nepalese capital of Kathmandu have been completely leveled. (Update: The death toll has now risen to over 8,800 dead, and more than 23,000 people are thought to be injured.)

The Guardian updated its report saying the death toll has risen to more than 1,000 people in Kathmandu and the surrounding valley, citing a Nepalese police spokesperson. BBC News also reported Saturday afternoon that the death toll likely exceeds 1,000 people, and is expected to rise as rescuers hurry to find survivors and bodies trapped beneath mounds of debris.

Although many sections of Kathmandu withstood the massive earthquake, the populous capital city saw a number of buildings, many of which were historic, completely leveled. Infrastructures in the Kathmandu Valley just outside the city also endured serious damage. BBC News reported that the epicenter of the earthquake, about 50 miles northeast of Kathmandu, was hit with "massive damage," according to Information Minister Minendra Rijal. "We need support from the various international agencies which are more knowledgeable and equipped to handle the kind of emergency we face now," Rijal told BBC News.

As first responders continue to valiantly search for survivors, here's how you can help the victims of the Nepal earthquake. Consider donating to one of these charities or organizations...

A donation fund has been established on crowdfunding website GlobalGiving. At press time, more than $29,000 has been raised of the $75,000 target goal. Donations can be made online or even by phone by texting "GIVE NEPAL" to the number 80088. Sending that text is an automatic donation of $10.

The fund's organizers described how the donations will be used:

All donations to this fund will support disaster recovery and relief efforts in response to the region of Nepal impacted by this earthquake. Initially, the fund will help first responders meet survivors' immediate needs for food, fuel, clean water, hygiene products, and shelter. Once initial relief work is complete, this fund will transition to support longer-term recovery efforts run by local, vetted local organizations.

The American Red Cross operates several programs in Nepal, including a community-level disaster response team for emergencies like this most recent earthquake. The American Red Cross has teamed up with Nepal Red Cross for the CADRE (Community Action for Disaster Response) program, which will train "576 CADRE volunteers from 96 communities in eight districts of Nepal and indirectly benefits more than 40,000 people," the Red Cross states on its website.

Humanitarian organization CARE has established an emergency fund for its humanitarian workers, who are currently on the ground helping victims of the Nepal earthquake and assessing the damage. According to the organization, donations will help workers continue to provide clean water, food and shelter to those displaced by the earthquake.

CARE's emergency response teams specialize in providing life-saving food, water, shelter and health care. CARE has more than six decades of experience helping people prepare for disasters, providing lifesaving assistance when a crisis hits, and helping communities recover after the emergency has passed. CARE, which works in 90 countries around the world, places a special focus on women, children and other vulnerable populations, who are often disproportionately affected by disasters.

You can donate directly to CARE's efforts in Nepal on the organization's website.

International aid agency Mercy Corps, which specializes in disaster relief, currently has more than 90 relief workers on the ground in Nepal responding to the devastating earthquake. The organization said in a statement sent to Bustle:

While details are still emerging, this appears to be an urgent humanitarian emergency that requires both immediate response and a longer term recovery plan. The death toll is rising and we are concerned the loss of life and livelihoods could be very significant. Those affected will likely need food, water and temporary shelter in the near term. Coming out of the immediate disaster, communities will need support getting back on their feet: rebuilding homes and schools, returning to work and processing the trauma. Mercy Corps will respond appropriately as we better understand the needs on the ground.

<img alt="" src="https://ssl.gstatic.com/ui/v1/icons/mail/images/cleardot.gif" class="article-body-image"/>Donations to Mercy Corps' response team in Nepal can be made on the organization's website or via PayPal.

Donations will go toward immediate emergency relief services and supplies, including shelter kits, and help displaced families. Direct donations can be paid by credit card on the CRS website.

Leading Jewish humanitarian group American Jewish Joint Distribution Committee (JDC) has begun mobilizing in India, consulting with local authorities and governments to assess the unfolding situations across both South Asian nations. "Together our network of global partners, we are drawing on our vast experience and standing presence in South Asia to ensure relief to survivors in their time of need," JDC CEO Alan H. Gill said Saturday in a statement. "As we have done many times in the past, we are standing as one with all humankind by deploying a Jewish response to a crisis impacting millions."

JDC provides both immediate and long-term disaster relief. In Nepal, the organization plans to use donated funds on medical supplies and equipment, and has already begun partnering with local Nepalese hospitals to provide medical relief. JDC is also working with UNICEF and other disaster-relief groups. Contributions to the organization's Nepal Earthquake Relief Fund can be made directly on the JDC website.