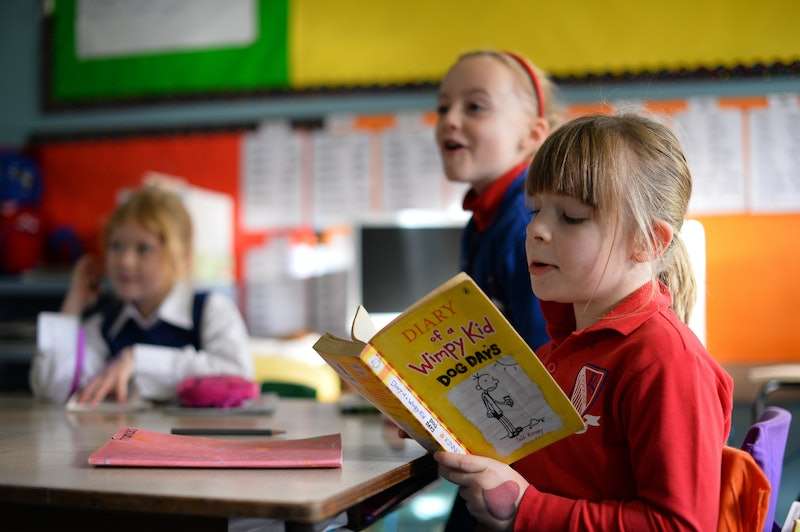 Boys like firefighters, pirates, science and sports. Girls like princesses, fuzzy animals, cooking and listening to explanations. That’s how gender works. Or at least, that’s how gender worked at a major children’s publishing house until last Friday, when an 8-year-old girl put an end to Scholastic books "for boys."

You're probably pretty familiar with Scholastic, but just in case you're not, the book publisher is the house responsible for many of the book fairs you ever attended at school. They're also behind a wide swath of the square big-fonted books you adored when you were 7. They’re the largest distributor of children’s books on Earth.

With titles like Bible Stories for Boys, they've been called out before for gendering some of their titles in the past. So when Els, a primary school student in London, spotted Amazing Things for Boys to Make and Do in the Scholastic book catalog, she got royally ticked off. Why couldn't she do the amazing things that boys could? Did wanting to do the amazing things make her weird?

“I think this is very wrong,” Els wrote in a petition she sent to the publishing house, called for Scholastic to put an end to gendered marketing and to revamp the Book Wizard, their online search engine that offered different book recommendations to boys. “If you tell that girl she could not have one of the books she likes, when she grows up she might feel lonely because she thinks that all the other girls like pretty, pink princesses and she doesn’t.”

Yeah. What the 8-year-old said. Els got more than 80 signatures from her friends, teachers, and families for the petition.

And with the help of Let Books Be Books, a British advocacy group that is working to end gender stereotyping in children’s books, she got Scholastic’s attention. The publishing house responded to Els’ requests before they received the petition. They said in an official statement to Let Books Be Books, “We do not label books as being ‘for boys’ or ‘for girls’ in our leaflets or at our fairs as we encourage free choice.... Our website is in the process of being re-launched and new Book Wizard will be part of that work.”

Scholastic also promised to put an end to publishing books with "for boys" or "for girls" lables in the title. Label that a "win" for Els — and for everyone. As we're finding out more and more every day, labels don't do anyone any good.