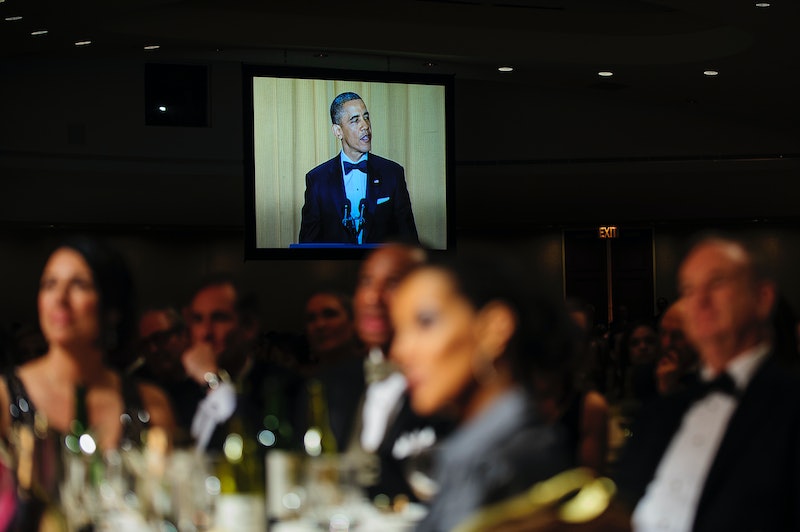 Helena Andrews is a Washington Post "Reliable Source" columnist, but Twitter came to know Andrews as the woman who reportedly texted during the national anthem at the White House Correspondents' Dinner Saturday night. To be fair, Andrews tweeted not long after the social media outrage got started that she was in fact taking notes for her job. It would be too easy to dismiss Andrews as "some girl" texting thoughtlessly, but she has quite a resume, and for goodness' sake, people, she was working.

Andrews' took to Twitter to respond to critics to say she was taking notes, a fact that is likely given she's part of the Post's live blog coverage.

Apparently someone saw me on TV "texting" during the dinner. FTR I was taking notes. On my phone. Because it's 2015. #WHCD

According to her author bio on Amazon (oh yes, wait until you hear about her book), Andrews was a staff writer at Politico and a contributor to The New York Times' Style section before joining the Post. And according to the page on Amazon, Shonda Rhimes (SHONDA RHIMES, YOU GUYS) has optioned Andrews' 2010 book Bitch is the New Black for a movie. In a 2009 profile of Andrews in the Post, in which they described her life as a "black Sex and the City," she explained her motivation for writing Bitch is the New Black.

What I am trying to say about single black women in any urban environment is, you don't know them as well as you think you do. They may not know themselves as well as they think they do.

Andrews is a 2002 graduate of Columbia University, according to her Amazon bio, and her first job after graduation was an internship with Oprah's magazine O, which paid $5.15 an hour. She holds a master's degree in journalism from Northwestern University's Medill School of Journalism. So it's hardly accurate to portray her as brainless or thoughtless (but, hey, go on, Twitter). In that Post profile of her, Andrews makes a strong case for not judging a book by its cover:

When people think about black women, they have only one adjective for us, which is "strong." The girl you see walking down the street looks like she has it all together but she may not.