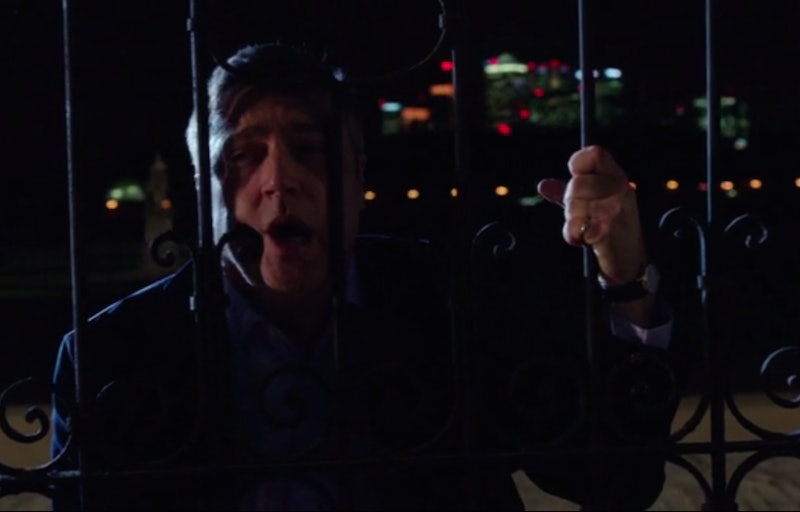 So much for the end of the monarchy. On Sunday night's episode of E! Network's hit series The Royals , King Simon finally made a public announcement that he was looking to bring forth a referendum to abolish the monarchy after he had enough of his family's horrible attitudes and actions. While Eleanor was still making trouble, and Liam was still making headlines (though sadly the most recent headlines were because of Ophelia and Liam's friend Ashok), it seems seeing Jasper leaving Queen Helena's bedroom the night before was really the straw that broke the camel's back for King Simon. He could no longer tolerate the zoo animal-esque behaviors of his family. Unfortunately before he could sign the referendum so the people could vote on the possible abolishment, King Simon was attacked and barely made it back to the palace gates. So is The Royals' King Simon dead? And if he is, what does this mean for the monarchy?

Well, here's the problem: The episode tells us nothing about King Simon's condition other than showing us that this possible attack left him quite bloody. My guess is that he was stabbed, but who did it? And will he live? Those are questions to which we just don't have the answers yet, but he's in pretty dire condition here:

My guess? He's still alive, but just barely. It seems likely that whether he lives or dies, Prince Liam is going to be running the country soon. That might make Queen Helena happy considering it could mean that the referendum is back on hold. And it could also make Uncle Cyrus angry because he still doesn't have the throne.

While King Simon's attack could have just been a mugging or robbery gone wrong, isn't it possible that this was pre-meditated? I think so, in fact, I think it's highly likely. Maybe it was committed by someone who either wanted to hurt the royal family — so probably a routine threat they get every day — or maybe it was someone who wanted to preserve the monarchy. If that's the case it seems it could really only be an inside job.

Does anyone else suspect that Cyrus had something to do King Simon's current predicament? Not only did Ophelia see him lurking around outside before King Simon's terrible news, he also know he's made threats about protecting the monarchy and wanting the throne. Hell, he even almost shot his brother during a hunting outing. Oh, and there's the fact that thanks to blackmailing Prudence, he knows King Simon goes out at night and he basically knows where. I think it's more than likely Cyrus had something to do with whatever happened to King Simon. I just hope Simon is alive and gets better so he can expose his brother's terribleness before it's too late.