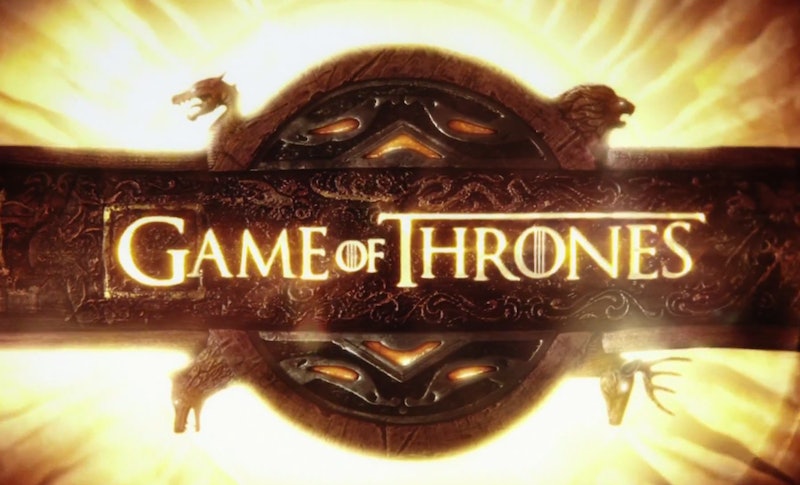 I, like many of you surely, am a gigantic Game of Thrones fiend. I've read the A Song of Fire and Ice series (what's been written so far that is), I watch the series religiously, I constantly dream about being Khaleesi, the mother of dragons and romancing Daario Naharis (the newer one of course). I even have a hand of the king pin. So when I was tasked to re-watch the pilot episode of HBO's Game of Thrones, I thought "this is going to be so easy, I remember everything." Yep, that was most certainly not the case.

Game of Thrones is a rich landscape and the episodes have certainly evolved over the last few years. Obviously it was terribly difficult seeing Ned Stark again, knowing he would be dead only a handful of episodes later. And it was equally difficult seeing all the Stark kids together, again knowing they would be faced with either a great deal of distance or death in the coming seasons. But there were other moments and images from the pilot that I had either missed or most likely forgotten. That's what's so fun about re-watching pilots of favorite shows, finding the ways things have changed over the years. In fact, it actually made my love for Game of Thrones even stronger.

1. The Pilot Doesn't Start With Opening The Credits As Per Usual

Of course the series wanted to start with a more interesting and attention grabbing scene than just the opening credits. Many shows do this. But it's still a bit jarring to watch now.

2. Beheading Was Really The Only Method Of Killing

3. Pentos Is Listed Only In The Pilot's Opening Credits

It's also the only time we see it in the series. So the continuity is on point in Game of Thrones.

4. "Winter Is Coming" Is First Said By Ned After 11 Minutes

And then it's repeated at least four more times in the pilot.

In this scene Catelyn reprimands Bran and lectures him on the dangers of climbing.

Oof. Thank goodness this is gone.

One of Dany's ladies in waiting tells her in this scene that the water is too hot and she steps in anyway.

8. Viserys & Dany Have The Same Hairstyle

Exactly the same. Like down to even the smallest wave or curl

I already knew this, but EW.

A Dothraki wedding that has less than three deaths is considered a dull affair. But we only see one death before Khal Drogo stops the festivities and takes his bride away. Does that mean their's a dull wedding?

11. What's With The White Walkers' Patterns?

Mance Rayder brings this up again in Season 4, saying the White Walkers are ever the artists.

Maybe it's just me, but I completely forgot about this sideburn ponytail/pigtail look. It's incredible.

In the pilot, we see King Robert and Ned Stark talk about Ned's sister and what "that wretched Targaryen" did to her. Is it possible the fan theory that Jon Snow is actually Ned's sister's son with Rhaegar Targaryen could actually be true? That would be quite the twist.