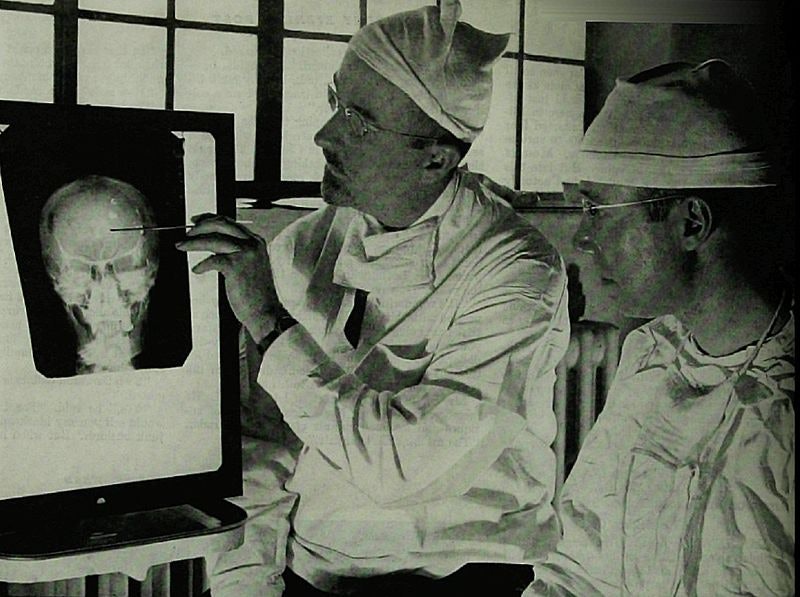 In some time periods, mental illnesses were thought to be simply incurable, or an irrevocable judgement by God: people were just trying to dampen the symptoms or keep patients away from "normal" citizens. It's enough to make you pretty grateful for how far we've come — even if today's mental health system is far from perfect, at least nobody's going to try poking your brain through your eyeball.

A lot of underlying factors in mental disorders remain mysteries, but these days, at least, we don't believe that they're caused by invading demons, by the "humors of the body being imbalanced" (that's blood, black bile, yellow bile and phlegm, if you've never spent much time with an ancient Greek doctor), by moral failings, or by pressure building up inside the skull that needs to be released through a hole.

1. Trepanning (aka Drilling A Hole In The Skull)

If there are bad things in the head, the logic behind this seriously painful practice goes, surely the best thing to do is get them out. And what easier method than drilling a hole in the skull? According to archaeological remains, we've been performing this very basic form of neurosurgery for over 7,000 years, and its use continued all the way up until the 18th century — with reasoning including "we're letting demons out" and "we're relieving pressure on the brain."

Amazingly, some people seem to have lived on despite having a round hole drilled in their skulls; skeletons have surfaced with neat, nice cranial cavities, probably performed without anesthesia, who definitely died of other causes.

In many different cultures, and in the European Middle Ages particularly, mental disorders — particularly violent kinds like fits or epilepsy — were believed to be caused by the devil. (This makes sense in context, as Europeans also believed that the devil spent his valuable time souring milk, so why not curdle a few brains while he was at it?) Consequently, a frequent prescription for mental disorders was a full-blown exorcism.

Driving out the demons from a person was a physical and difficult process, involving a priest or member of the cloth who berated and challenged the devil to come forth and, often, a group of assistants to hold the poor subject down.

The ancient Mesopotamians took the "drawing out the devil" practice to a new level. They still believed that mental disorders were caused by a devil or evil force trapped in the brain, but were wilier about luring it out: they used a combination of threats and bribes to try and cajole the spirit into leaving. No word on what they used, but I'm guessing tasty food and gold?

To be a patient in a mental institution in the 1800s was to lead a very, er, fluid existence. Medical expertice insisted that you be fed a diet of laxatives and "mineral tonics" to keep your bowels continually emptying, and emetics, to make you vomit. Purging the body of impurities was the stated aim, though I can virtually guarantee it didn't help very much.

The idea of the brain somehow "overheating" or getting "over-stimulated" by sensations — anything from complicated foods to too much exercise — as a cause of insanity and other mental disorders lasted well into the 1800s. Hence a doctor's treatise in 1716 ordering that an insane person be treated with the blandest diet in the world: no spices, lots of lettuce, barley-water, and chilly soups to "calm" the body. (He also recommends that the "mind be kept free from all passions," which could enrage the sanity.)

If you had anything wrong with you at all between about 1100 and the late 1800s, you were going to have a bit of your blood leaked out of you. It was just standard practice. Bloodletting was a huge part of Western medicine for centuries, and that includes treatments of mental disorders.

"In mania they bleed, in melancholia they purge," lamented a disapproving doctor in 1836, as the practice fell out of favor. Blistering, however, was a new one: deliberately causing a blister on a patient's skin, usually on the head, was supposed to help whatever was going on inside by "drawing out" the problem.

This complicated idea from the late 1700s was founded by scientist Franz Mesmer, who believed that all living things produced a force, and that disruptions in this force were the reason for mental and physical disturbances. It boiled down to waving magnets at your head. No, really.

Putting magnets on a mentally ill person's body was supposed to correct whatever problems the force was encountering in their innards. Unsurprisingly, it didn't work.

You've probably heard of this one (as you may have also heard of electric shock therapy, which is still used in severe and urgent cases). The original lobotomies were performed with a long sharpened spike, and didn't take any of the brain out: doctors just used the spike to sever the connections between the frontal lobe and the rest of the brain. The procedure could take as little as five minutes.

Sadly, since the frontal lobe is the center of our personality and emotional intelligence, lobotomized patients were never able to be social beings again. The procedure was invented in 1935 and rapidly fell out of favor by the '70s, when drugs like Prozac offered a less gruesome alternative — but in that time, over 40,000 Americans were lobotomized.