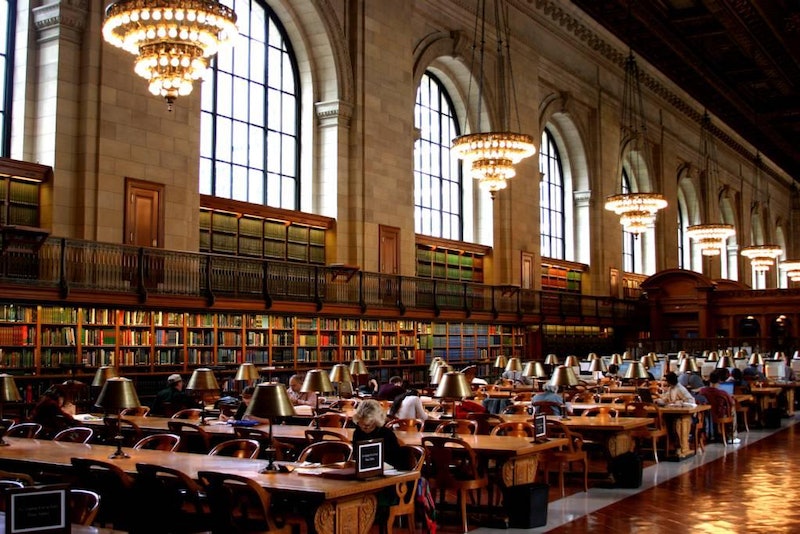 There is certainly no shortage of things to do and see in New York City, but which NYC institution do New Yorkers visit the most? It turns out that of the city's many destinations, New York libraries have the most visitors. In fact, there were more visitors to New York libraries last year than the city's major sports arenas, museums, performing arts centers, botanical gardens, zoos, and historical sites combined. What can I say? Books are just that awesome.

New York City maintains three separate library systems, the New York Public Library, which serves Manhattan, Staten Island, and the Bronx; the Brooklyn Public Library, and the Queens Library. Together, the various library buildings received a total of 37 million visitors last year. The city's major league sports teams, between baseball, basketball, football, and hockey, only saw about 9 million visitors at their arenas. Visitors to other city owned attractions, including New York's many museums and performing arts centers, totaled a combined 21 million people. In other words, of the cities many famous institutions, its libraries are by far the ones that see the most traffic.

And yet, as the New York Times points out, libraries in New York are currently facing tough times, much like libraries across the country. Because despite being incredibly popular and providing numerous vital services to the community, libraries just don't get the kind of funding they deserve. People might think that libraries are becoming irrelevant in the Internet age, but actually, they are still incredibly popular, incredibly important community institutions.

Here are just a few awesome things that New York's libraries do for the city, which you can find just by browsing their websites.

People like to act like we no longer need libraries now that we can find everything online, but if you want to do any kind of serious research on a topic, it definitely pays off to have access to the many databases available to the library — which you can do for free. Just look at the above search options from the New York Public Library. And in general, most libraries are great at finding a way to get you the information you need at no cost to you.

The Brooklyn Public Library isn't the only library that's great about providing lifelong learning opportunities for residents. Many libraries around the country offer adult literacy courses, or courses to help people learn English as a second language.

Admit it, you wish you could go be part of this Lego Club at the Queens Library. And that is just the tip of the iceberg when it comes to programs that New York libraries offer to kids.

The New York Public Library sponsors book discussion groups at many of its library branches, meaning you don't have to talk your friends into the idea of a book club in order to join one. And you can meet other book lovers in your neighborhood.

Every Other Kind of Club

For instance, the Queens Library sponsors a Chess Club for all ages and a Future Business Leaders of America club for teens.

Trying to find a job? Your local library probably has resources to help with that. All three of the libraries in New York certainly do.

And of course all of these other services are on top of their already totally amazing, totally awesome mission to provide the people of their communities with as much reading material as possible, all at no charge. Whether you're looking for ebooks, audio books, or good old fashioned hard copy, your local library has you covered.

It's no wonder so many people go to their local libraries.

More like this
13 Summer Solstice Quotes To Celebrate The Longest Day Of The Year
By Sadie Trombetta
16 Novels That Paint A Realistic Portrait Of Abortion
By K.W. Colyard
Lauren Rae Is Bringing Back The Sex And The City Vibes In Her New Memoir
By Shahed Ezaydi
10 Must-Read New Books Out This Week
By K.W. Colyard
Get Even More From Bustle — Sign Up For The Newsletter