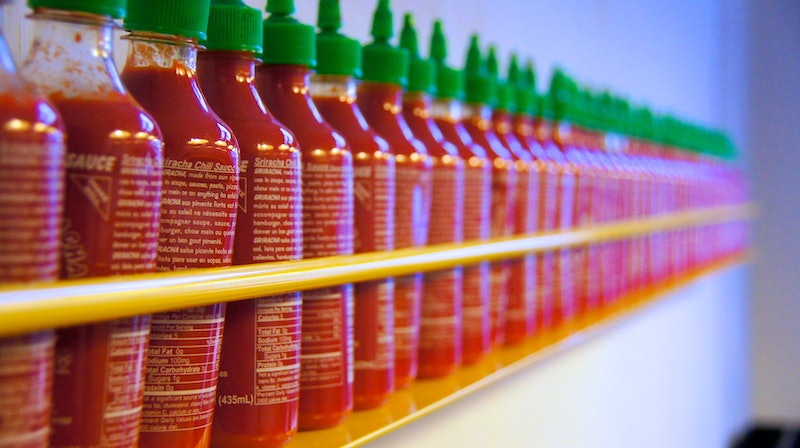 Looks like Sriccha is in hot water/sauce. The small SoCal city of Irwindale filed suit Monday against Huy Fong Foods, makers of Sriracha (aka nectar of the gods) because they allege the that company's production of the hot sauce creates an "odor" that, the town says, qualifies as a public nuisance. Furthermore, the town has asked the Los Angeles County Superior Court to ban production until the company submits a plan for making the odors less obnoxious.

About 30 residents of the city, according to City Attorney Fred Galante, have lodged complaints about experiencing burning eyes, irritated throats, and headaches due to the smell.

“Given how long it’s going on, we had no choice but to institute this action,” Galante said. It's worth noting that the plant is "brand-new" and production of the sauce only occurs during three months, roughly from sometime in September or October to early or mid-December. Admittedly, there is a lot of production going on: 100 million pounds of peppers are processed into the sauce.

However, the concentrate-making efforts result in especially concentrated smells, according to residents. Despite the plant's carbon-filtration system, which diffuses the odors of garlic and peppers, "It's like having a plate of chili peppers shoved right in your face," said Irwindale resident Ruby Sanchez. Sanchez also lives "almost directly" across the street from the plant, and her neighbors have to shut their windows and pull their kids out of backyards to cope with the smell, which brings with it burning throats and watery eyes.

City officials and company execs met earlier this month to discuss other options — including a new, $600,000 filtration system that Huy Fong didn't think it needed. The company is still looking for alternatives.

"It is a good product," Galante said. "The city has no issue with the product. They just want them to upgrade, as good neighbors, and not negatively affect the residents."

Fair enough. This is still our favorite water bottle though.

More like this
What To Know About Martin Bashir After Watching 'The Crown'
By Bustle UK
This Luxe Cookware Is Beloved By Celebrity Chefs — And It’s Majorly Discounted For Black Friday
By BDG Commerce
How Long Does Leftover Stuffing Last? Here's When To Toss It
By Chelsey Grasso and Alexis Morillo
The 7 Best Microwavable Coffee Mugs
By Kirsten Bakstran
Get Even More From Bustle — Sign Up For The Newsletter