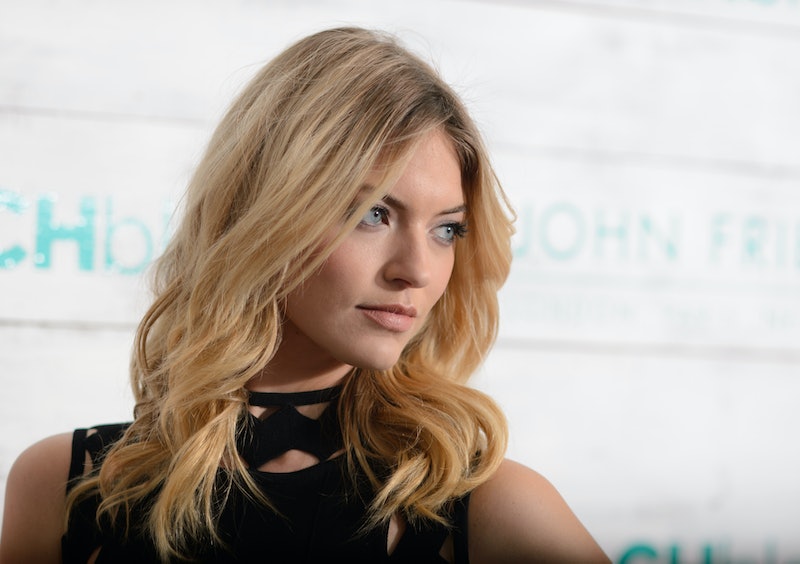 It seems like Taylor Swift has a whole new batch of friends every day! For example, who is Martha Hunt, and since when is Swift close enough to her to dedicate a whole Instagram post to her? Posting a 'gram of herself, Karlie Kloss, Hunt, Gigi Hadid, and Ashley Avignone in a group congaline of a hug Monday, Taylor Swift wished Martha Hunt a happy birthday. The pop star also noted that this month Gigi Hadid also said goodbye to her teen years turning the big 2-0, wishing that she could celebrate with both Hunt and Hadid.

Unless you've lived under a rock for the past year, you know who Gigi Hadid is by now. She was crowned model-of-the-year in January and seen on runways and fashion campaigns across the board. But though Martha Hunt's name was ringing a bell, the sound was distant.

North Carolina native Martha Hunt was discovered in Charlotte and brought to New York where she signed with IMG Models and walked her first runway in 2007 for Issey Miyake at New York Fashion Week. Having walked for designers like Chanel, Oscar de la Renta, Giorgio Armani, and Diane Von Furstenberg, you'd probably know Hunt best for her work with Victoria's Secret. Within the last two years, Hunt walked in the luxury lingerie brand's fashion shows, posed for their catalogues, and was featured in the first annual Victoria's Secret Swim Special on CBS.

Now that we've got her resume down, I wanted to go behind the scenes and show you who Taylor Swift's friend really is when the camera stops shooting. Check out 11 things you probably didn't know about Martha Hunt.

Whether she's wearing New York fashion labels or enjoying the city's culture, Hunt may be from North Carolina, but she's an honorary city girl.

Hunt uses her model super powers for the good of man kind, giving back to those less fortunate. She hosted Design On A Dime shopping benefit in which proceeds were donated to support the homeless living with HIV/AIDS, helping them find shelter.

Unlike BFF TSwift with her however many cats, Hunt is all about her furry friend Bear. Isn't he cute?

4. She supports her friends.

Whether it's welcoming an honorary angel to the flock or promoting a co-worker's solo project, Hunt is all about spreading the love and giving her support to her friends and their dreams.

5. She's all about women empowerment.

Hunt is all about the self-love movement and coming together to make things right for women who suffer, reminding us that women should not be in competition with each other, instead helping each other to rise.

No matter how busy her schedule, Hunt makes time for her lady friends. Work will come and go, but as the Spice Girls would like to remind us, "friendship never ends."

7. She takes pictures of her food like the rest of us.

8. She poses in bikinis — and surfs in them.

9. Actually, she enjoys being active in a lot of unique ways.

I really thought these rope things were only in the State Farm Aaron Rodgers commercials.

Beauty and brains, Martha Hunt enjoys to unwind by getting lost in a story not her own.

Now that we've gotten you a bit more familiar with TSwift's gal pal, recognize her yet? Martha Hunt would like you to know that she's around, and she's only getting started.

More like this
Taylor Swift’s Latest Look Just Took Me Back To Her Red Era
By Allie Fasanella
Taylor Swift's “Carolina” Theme For 'Where The Crawdads Sing' Soundtrack Is Here
By Jake Viswanath
The Secret To Taylor Swift’s Fringe, According To The Experts
By Orla Pentelow
Taylor Swift Fans Caught A Possible ‘1989’ Clue In Her Latest Awards Show Speech
By Grace Wehniainen
Get Even More From Bustle — Sign Up For The Newsletter