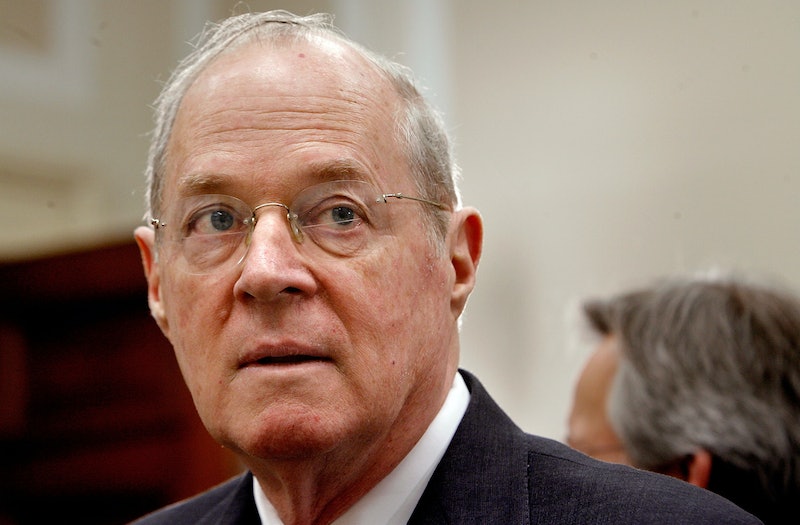 The argument over whether same-sex marriages are protected by the constitution is heating up. On Tuesday, the U.S. Supreme Court will begin hearing arguments on the issue, drawing a sharply dividing line down the center of two already conflicting camps. The vote, slated to take place by late June, has largely been a partisan one, with many analysts agreeing that eight of the nine Supreme Court justices would vote along with their respective camps. If they're correct in those assumptions, wildcard Justice Anthony Kennedy's vote might decide the gay marriage issue once and for all.

As The Wall Street Journal points out, the conservative Justice Kennedy, originally appointed by President Reagan in 1988, has more than 20 years of composing gay rights opinions for the court, and some believe that his concern for "individual autonomy and human dignity" might push him to the left this time as well — though he might not necessarily see it that way.

"[Justice Kennedy] partakes of both, Reagan and Warren, a libertarian streak and a commitment to inclusivity," said Yale law professor Akhil Amar in an interview with the Journal, pointing to Kennedy's "California Republican" demeanor as the likely reason he would be more open than other conservatives to receiving arguments on the issue.

Of course, that same inclination toward protecting rights might also place him on the opposite side of the fence, explained one UCLA Law professor.

"Opponents of same-sex marriage are hoping Justice Kennedy’s love of states' rights overcomes his inclination towards protecting LGBT people," said Adam Winkler, a UCLA professor and specialist in American constitutional law, in an interview with Business Insider on Sunday. "[But he might also] say there is a fundamental constitutional right to marry, and states do not have the authority to infringe on fundamental rights."

It's a tricky decision to predict, in Kennedy's case. While the other eight Supreme Court justices will likely vote in the same vein as previous decisions — with Chief Justice Roberts, Justices Scalia, Thomas, and Alito voting conservatively and Justices Ginsburg, Breyer, Sotomayor, and Kagan all likely casting left — Kennedy is a notorious "hand-wringer" who spends much more time worrying over the minutiae of various cases, as Justice Scalia once teased. In a monumental case like same-sex marriage, that might not be a bad thing.

While the conservative Kennedy's previous votes on topics like abortion, gun control, and campaign financing denote a largely textbook Republican ideology, it's his history of LGBTQ rights that mark him as the deciding factor in Tuesday's landmark case.

After the passage of a 1986 bill that made homosexual relations illegal in the state of Texas, Kennedy took the case under his wing in 2003, striking down the law and declaring, "It is the promise of the Constitution that there is a realm of personal liberty which the government may not enter." Scalia accused Kennedy of falling victim to the ongoing "culture war," saying that the decision impeded on individual opposition to homosexuality, but Kennedy stayed the course.

Similarly, in 2013, Kennedy again voted along with his more liberal colleagues to strike down the notorious Defense of Marriage Act, which defined marriage as a union between a man and a woman only. Kennedy called the Act "disparaging" and insulting to same-sex couples.

Of course, the final tally for each side of the vote this summer is anyone's guess. Justices are asked to be impartial defenders of the Constitution, after all. With the detail-obsessed Kennedy at the helm of the defining vote, the wind could blow either way.