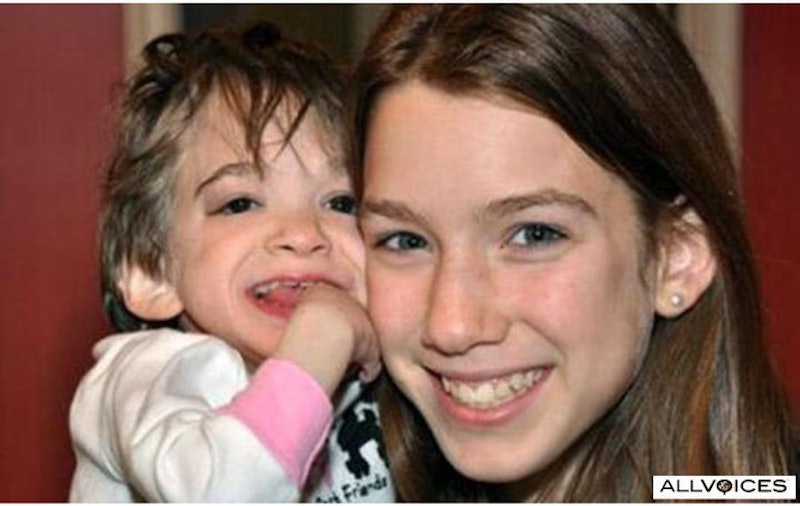 Brooke Greenberg, the 20-year-old woman from Reisterstown, Md. who suffered from the mysterious "Syndrome X," died last Thursday. Now, doctors say they hope that her unique medial condition will yield new insights into aging and the effects the process exerts on the body. Although she was old enough to vote, Greenberg died with the appearance of a toddler, and never weighed more than 17 lbs. Her development stalled at age five.

Medical specialists did not know what condition Greenberg had — although it manifested itself a little like a Benjamin-Button-esque progeria in reverse. There are only a few known cases like Greenberg's in the world, and there still hasn't been extensive research about the condition. Every test possible — for birth defects, genetic anomalies, endocrine problems— was run. Birth defects were negative, endocrine system came back fine, and on first look, her genome came back absolutely normal. And so doctors called her state Syndrome X — the X for "unknown."

“She literally is the fountain of youth if you think about it,” her father Howard said in 2005. The family agreed to let doctors sequence her genome for clues about her condition.

Greenberg developed serious health problems during her short life. Something seemed out of sync in her body: She developed stomach problems and had to be fed through a tube, despite being able to eat her first few years. While her bone age was stuck at 10, her mental development remained at age five. Soon, cerebral palsy and epilepsy set in. Several serious calls in the past had her family picking out caskets, last outfits.

With her DNA (as well as tissue and blood samples) now in labs, doctors are looking at her genome to see if it holds clues to human longevity. On a later sequencing, scientists led by Eric Schadt found three mutated genes that hadn't been seen before in the general population. Two of those genes, Schadt said, could be related to aging (the third's role is unclear). By making stem cells and testing them under different conditions, it might just be possible to figure out exactly what her condition could tell us about aging.

“If one of those genes is a true candidate, it would shed real light on aging and development, which would be a big contribution to the scientific community,” says Schadt, whose team has also inserted Greenberg's genes into fruit flies.

Another scientist who's worked with similar developmental cases, Richard F. Walker, has another idea: He has theory that all our systems need to adapt congruously with the changes that happen around us. After a certain point — our physical peak — there's some "friction" in the process and because of this, we begin declining. He suspects Greenberg's genetic 'change' mechanism, which allows parts to work synchronously, was damaged.

"There've been very minimal changes in Brooke's brain," Walker said in 2009. "Various parts of her body, rather than all being at the same stage, seem to be disconnected."

Because it's not exactly known what condition she died from, nor how it's developed, doctors can only speculate on what exactly caused Greenberg's death.

"From a scientific standpoint, cases like Brooke's can blow a whole field of science wide open by elucidating what's going on in her," Schadt said last January.

More like this
9 Stretches To Try If You Have Piriformis Syndrome
By Carolyn Steber
Justin Bieber Says It’s “Getting Harder To Eat” After His Facial Paralysis Reveal
By Brad Witter
How 5 People Upended Their Lives To Fight For Abortion Rights
By Hannah Smothers
The Families Of Grenfell Tower Are Still Waiting For Justice, Five Years On
By Bustle UK
Get Even More From Bustle — Sign Up For The Newsletter