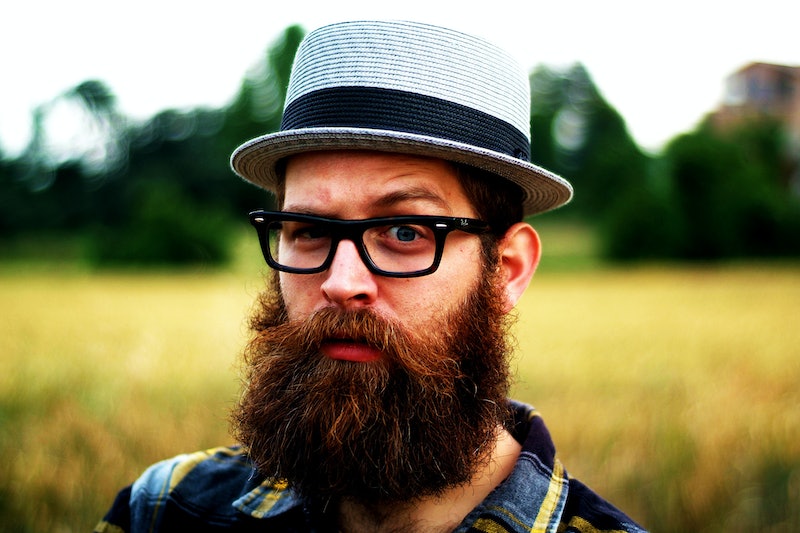 I find there are two types of people: beard-lovers and beard-haters. OK, maybe "hate" is a strong word. But most women (and men) that I speak to either love facial hair on their mate… or are strongly against it. Whether hipsters continue to make beards popular, or celebrities do, we cannot take more than a few steps without seeing someone, somewhere sporting one. When you're dating a man with a beard, you're surely aware that beards are everywhere. They come in all shapes and sizes—thin, thick, patchy, full—and some even compete for prizes.

Real Men Real Style (RMRS) has “A Man’s Guide to Beards” that differentiates the one-month beard from the three-month version from the year-long one. The RMRS site gives various beard-grooming tips, including ones regarding when to shampoo, trim, and use softeners on the facial hair. It suggests that men use beard oils and moisturizers, especially at the beginning of growing a beard, when it’s itchy as stubble appears. The moisturizer will also benefit whomever’s kissing the beard-grower, so thank you in advance, gentlemen. This is key when you've got a bearded BF.

But, if you're a newbie, what do you need to know about dating a man with a beard? Since I’m in the beard-lover camp, here are some tips to get you started.

1. Get used to other women or men admiring his beard.

Yes, people will come up to your guy when you’re out and commend his beard—the way it is groomed, the depth and breadth of it, mesmerized, ask him for tips on how he does it, etc.—like he’s a beard god of some sort. You may get a bit insecure, or you'll feel his popularity rub off on you. Some admirers may be flirtatious, though most will probably just being giving him a good, old-fashioned compliment. And that’s nice, right?

2. Get used to liking your face against his… beard.

Beards are soft (!), almost like down pillows on a man’s face. OK, maybe not down, but you get the point. After a while, your face against your guy’s will come naturally. (And when/if he shaves, you’ll be the first to notice and miss all that facial hair!)

3. Get used to laughing when bits of food (and beverages) get into your man’s beard.

As soon as he sees you smile or crack up, your eyes on his beard, he’ll know what it’s about and grab his napkin (or adorn his beard with even more food particles to be funny).

4. Get used to his beard competing for his attention.

Yes, guys who shave spend time shaving, but men with beards tend to spend a lot of time with their beards (24/7, in fact) and treat their beards like a child, an additional appendage. They will trim it, groom it, wax it, get every hair just right… So, you may compete for bathroom time or your boyfriend’s time, in general—You vs. The Beard. After all, his relationship with the beard has probably been longer than the one he has with you.

5. You may catch him spending the evening with… his beard.

Yes, bearded men like playing with their beards. You’ll come over to catch your man sitting on the couch, one hand on a beer, the other on his beard, stroking it over and over again. They’ll do this in private, they’ll do this in public, they’ll do this second-nature. It’s a habit many bearded men I know—and see out and about—partake in. I asked some why and they all said a version of, “It feels nice” and “It’s so soft.” (And, I agree.) So, just know that if your guy’s not holding your hand, he’s probably holding or touching his beard. A pretty innocent misdemeanor, all things considered.

More like this
Kiehl’s Just Launched Eco-Friendly Cleansing Bars
By Jessica Morgan
How To Style Your Hair For A Festival, According To Maya Jama’s Hairstylist
By Tomi Otekunrin
Charlotte Tilbury Just Added A Glow Tonic To Her Skincare Collection
By Tomi Otekunrin
The 'Love Island' Cast Swear By This £5 Sleeping Mask
By Tomi Otekunrin
Get Even More From Bustle — Sign Up For The Newsletter