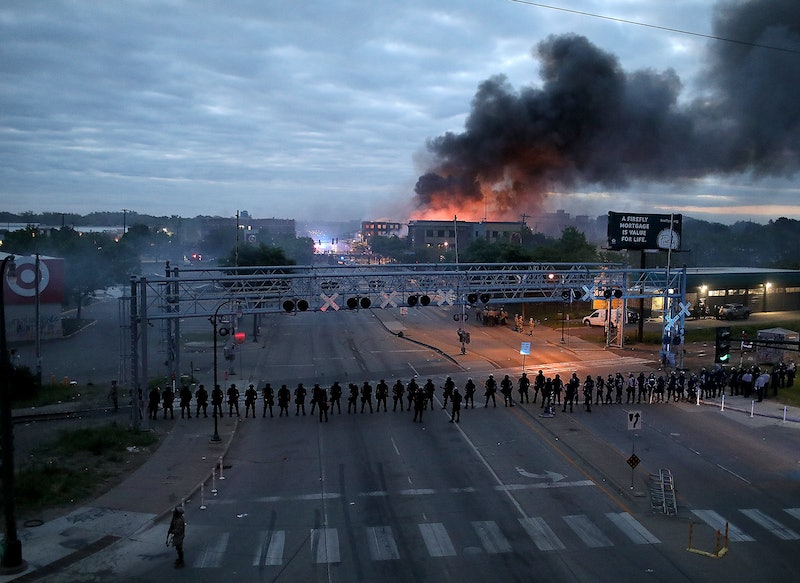 Cities across America have now seen several protests and riots in response to the death of George Floyd, a Black man who died in Minneapolis, Minnesota, after a police officer knelt on his neck for nearly nine minutes. The police officer, Derek Chauvin, has now been charged with third-degree murder and manslaughter. Citizens and journalists have reported being arrested and tear-gassed while protesting peacefully. The protests follow a precedent set by uprisings in Ferguson, Missouri, or Baltimore, Maryland, following the deaths of Mike Brown and Freddie Gray in 2014 and 2015.

But the demonstrations in support of Black Lives Matter are not just part of a current series of protests; they are the latest incarnation of a very American institution. A quick peek at the history books reveals that American history, before and after the Declaration of Independence, is packed full of protests that turned violent, from the tiny and symbolic to the nationwide and highly destructive. Even Thomas Jefferson said, “The tree of liberty must be refreshed from time to time with the blood of patriots and tyrants. It is its natural manure." Meanwhile, modern readers can't overlook the irony that Jefferson himself owned slaves and thus contributed to the culture of systemic, racist violence protestors are still fighting today.

When injustices strike, Americans have taken to the streets, and sometimes, they've achieved some genuinely great things (though not all of these outbursts, like the anti-abolitionist riots of 1834, were on the side of justice and equality). There are examples where riots led to genuine institutional shifts, new laws, and change for the better. Here are nine times when violent demonstration created real change in America.

The Issue: You've heard of the Boston Tea Party (which we'll get to in a minute), but the Stamp Act Riots were also a foundation for the American Revolution, for much the same reason. This time, it was a stamp tax: all the printed material in America was supposed to be taxed for Britain's coffers. Unsurprisingly, it was wildly unpopular, and riots emerged in the streets of Massachusetts, New York, Rhode Island, Philadelphia, and elsewhere.

What It Changed: The Stamp Act Congress, formed of American lawyers and politicians, drafted an angry declaration on why the British Crown had no right to tax Americans on anything at all. The Stamp Act was repealed by a rattled British government in March 1766, and the stage was set for a bigger rebellion, known as...

The Issue: This is the riot history books most often glamorize. As every school kid knows, it was about a British tax duty again, this time on tea. The protesters famously tossed an entire shipment of tea belonging to the East India Company into Boston Harbor, some while dressed as Native Americans to emphasize how non-British they felt.

What It Changed: The British government was, of course, not particularly moved and attempted to retaliate, restricting America's already limited right to govern itself. The push towards war had begun, and the rest of the story is, well, history.

The Issue: Pennsylvanian soldiers who'd fought in the Revolutionary War started a ruckus over the fact that the Congress of the Confederation, who were based in Pennsylvania at the time, hadn't paid them. Four hundred of them marched on Congress' base in Philadelphia, whereupon Congress itself was flabbergasted to find out that the state of Pennsylvania wasn't willing to do much to protect it. The congressmen fled.

What It Changed: Pennsylvania's refusal to protect Congress led to the idea in the Constitution that the federal government needed to have its own special district as a base, rather than relying on anybody else. Hence the idea of Washington, D.C., was born.

The Issue: Rhode Islanders, led by Harvard-educated attorney Thomas Wilson Dorr, were irate at the very particular qualifications required to vote in elections. A man needed $134 in property to be allowed, which was out of reach for much of Rhode Island's population, and towns were represented regardless of their population. The riots were largely bloodless (one person died by accident), and Dorr was so popular that for a month and a half in 1842 Rhode Island had, in effect, two governments fighting for power.

What It Changed: The elected state government eventually lowered the property requirement for men born in America to $1, meaning that suffrage was hugely expanded. (Women, of course, didn't get a look-in for over 50 years.)

The Issue: Many things seem to have contributed to the huge Detroit riots of 1967, some of the biggest America has ever seen. It was sparked by the arrest of a party of Black revelers at an unlicensed bar, but the violence soon spilled over racial lines: white people joined in, and looting was committed on Black- and white-owned stores. Detroit was still brutally racially segregated, and even though Detroit was pouring millions into social integration and affordable housing, dissatisfaction (particularly over discrimination by police) boiled over into unrest.

What It Changed: Both good and bad things emerged from the city riots, but much stricter police protocols over hiring minorities and enforcing discrimination laws were put in place, a lot of government departments started recruitment drives for non-white people, and fair housing legislation was rushed throughout the state Congress.

The Issue: LGBTQ customers at one of the only openly gay spaces in New York, the Stonewall Inn in Greenwich Village, were raided by police in the early hours of June 28 — not unusual, as being gay was still illegal in every state except Illinois. This time, however, the customers reacted badly, resisting arrest and forcing the police to barricade themselves inside the bar. Protests increased, with many more people joining in, and carried on for six days.

What It Changed: GLAAD calls the Stonewall riots "a catalyst for the modern movement for LGBT equality." It marked the beginning of a fight for rights rather than an attempt to remain under the radar; the city's first gay pride parade was held in November of that year, and visibility and advocacy groups sprung up all over the nation by the next year.

The Issue: The Kent State riots were originally a protest against America's role in expanding the Vietnam War into Cambodia, but they turned into a four-day riot. Four unarmed students were ultimately shot by police.

What It Changed: The riot and its aftermath prompted huge protests across the United States, widespread reports of firebombing and arson, and a nationwide student strike. President Nixon withdrew troops from Cambodia in response.

The Issue: The Mount Pleasant riots in Washington, D.C., were prompted by a rookie police officer's botched arrest of a Salvadoran man for disorderly conduct, in which the officer shot the man in the chest. The Latinx community, which had been feeling sidelined and discriminated against already, rioted — and 230 people were arrested over two days.

What It Changed: The riots prompted a heavier integration of Latinos into the police force at Mount Pleasant, a report by the United States Commission On Civil Rights that found Spanish speakers faced systematic discrimination from police and the community, and a new set of policies about police conduct, including an agreement not to ask citizens about their immigration status.

The Issue: The L.A. rioots erupted after a mostly-white jury acquitted four police officers of using excessive force against Rodney King. Property damage worth $1 billion was caused, swathes of Los Angeles were set ablaze, and 50 people were killed, as protestors demanded justice.

What It Changed: In the light recent killings of Black people by the police — Breonna Taylor, Tony McDade, and now George Floyd — some would argue not much. South L.A., the sparking point for the riots, continues to experience gang and police violence, in addition to widespread poverty: in 2012 there were calls for the LAPD to be investigated by the federal government after three more incidents of violence. However, at the very least, the L.A. riots started conversations about the racial compositions of juries, and a huge amount of charitable community organizations emerged afterwards to try and mend the damage.

This article was originally published on April 28, 2015