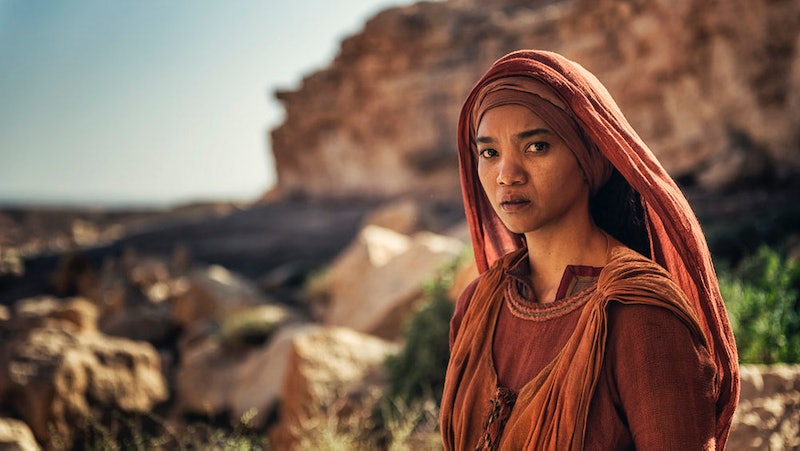 Actress Chipo Chung was born in Tanzania, raised in Zimbabwe, educated at Yale, now lives in London, and filmed her role as Mary Magdalene in NBC's AD: The Bible Continues in Morocco. Not to mention the fact that she has family all over the world. But as many places as her acting career has taken her, Chung still remains dedicated to giving back to her native Africa. She is one of the original founders of the UK charity and Kenyan non-profit Sponsored Arts For Education (SAFE), which uses performing arts to educate the community about important issues and inspire social change.

"When I first came across the work of this group, I was really moved, because they were like me: From Africa, but instead of wanting to be famous, they wanted to help their communities," Chung tells me. "They were just so professional and using the best of their talents to educate people, at that time it was mostly HIV. To save people who were dying and who were just too scared to go to the hospital or who had misleading stories on how one contracts the disease." Today, SAFE counts Daniel Craig, Alan Rickman, and Sir Ian Holm as patrons of the organization. It's the perfect organization for Chung, because giving back to others and acting are two of her passions.

Beginnings As An Actor

During her childhood in Zimbabwe, Chung went to catholic school and had to wake up at 7 a.m. for class — a time of day she was not a fan of. "I'm not a morning person and I remember promising myself at 14 that I would never have a job where I had to get up in that early in morning," she says with a laugh. "Acting has always worked for me, because the theater happens in the evening."

In addition to acting at her school, Chung studied theater at Yale University and London's Royal Academy of Dramatic Art (RADA), which is where legendary actress — and one of Chung's idols — Vivian Leigh also studied acting.

After graduating, Chung appeared in many theater productions around the UK, as well as on TV in Sherlock, Camelot and Fortitude.

Chung helped found and set up SAFE in Kenya, because she was drawn to their mission and impressed by the good that could be accomplished through the organizations films and productions. "I'm wonderfully privileged to be able to act and play as my profession, so I really respected these actors and I spent a good five years doing everything I could to make sure they were supported in Kenya," she says.

She's even made a cameo appearance in one of the films SAFE produced. "I've also gone out there to see their work and it always inspires me to know that what we do as actors actually can change the world," she says. "I really do think SAFE is doing that."

SAFE has been working with the Kenyan Maasai community about HIV, and the next issue that they're taking on is female genital mutilation, which is a huge issue for the non-profit.

"It's practiced on most of the women in that community," Chung explains. "When they're 13, they get cut. We have been working with them for about seven years using tradition film and storytelling to change the narrative to look after their girls and keep them healthy. We have in our sights — in the next 5-10 years — abandonment of the practice and that's our main goal, because that's major change."

Between her own experiences, acting career, and important work with SAFE, it seems that Chung is not only helping women directly through her non-profit, but inspiring girls everywhere.