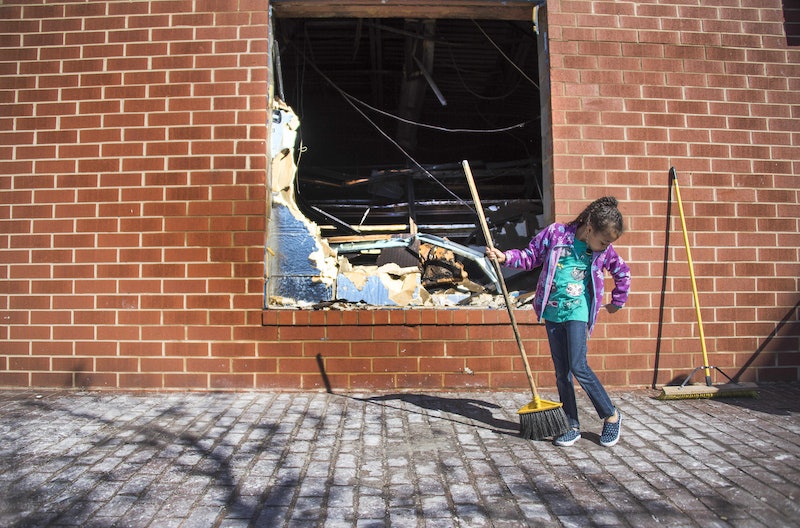 As the citywide curfew was lifted at 5 a.m. Tuesday, residents of Baltimore saw for the first time what the riots have left in their wake: smashed store windows, charred cars and the smoking remains of a CVS pharmacy. Much of the damage was wrought in West Baltimore, trickling into the city's popular downtown Inner Harbor area later in the evening. The Mondawmin neighborhood, located northwest of the gleaming skyscrapers and downtown tourist spots, was heavily impacted, Baltimore police officials said.

At least 15 police officers were injured during the riots that broke out Monday afternoon; six of those officers remain in serious condition. The Baltimore Police Department said early Tuesday that some of its hospitalized officers have already been treated and released, though the department would not confirm the exact number of remaining hospitalized officers.

"I am extremely disappointed in this beautiful city tonight," Baltimore Police Commissioner Anthony Batts said at a press conference Monday night. "I’m disappointed in the fact that the damage has been done to these communities, I’m disappointed that we cannot be more responsible in an embarrassment that we have nationwide in our community."

Batts added that the riots that sparked Monday afternoon were not protests but "criminal acts." The community does not "need to be harmed in a way that we have today," the police commissioner said.

The mayor's office said on Tuesday that there were at least 15 structural fires reported over the last 24 hours. More than 200 people were arrested during the riots.

It's unclear at this time how the rioting began, though The Baltimore Sun reports it all started with a flier passed around schoolchildren that proclaimed a "purge" was set to take place. The widespread riots came the same day that Freddie Gray, a 25-year-old unarmed black man who died while in police custody, was laid to rest in Baltimore. Gray's spinal cord was allegedly nearly severed after he was placed, in handcuffs and shackles, in the back of a police van earlier this month. It's believed that Gray's spinal cord was seriously injured while in custody of Baltimore police, although the police department has virtually remained silent on the cause of his grave injury.

On Tuesday morning, local business owners and West Baltimore residents came out to survey the damage, which included piles of broken glass and burnt cars on the streets. According to the Baltimore Police Department, tow trucks were called in overnight to remove some of the damaged cars at Fulton and Pennsylvania Avenues. There was also significant damage at Pennsylvania and North avenues, not far from where the CVS was looted.

At sunrise on Tuesday, many residents returned to the streets with brooms and trash bags in hand. According to several Facebook event pages, thousands of volunteers are planning a day of action to clean up their city.

WBAL reporter Megan Pringle reported Tuesday morning that firefighters have already returned to the looted CVS, which was partially destroyed by fire and vandalism. Meanwhile, volunteers continued to gather on nearby streets — and even in front of the CVS.

Maryland Gov. Larry Hogan declared a state of emergency on Monday night, prompted into action by Baltimore Mayor Stephanie Rawlings-Blake. The National Guard has been deployed to the city, creating a strange dissonance as armored tanks trudge past damaged businesses and smoking cars early Tuesday morning. About 500 guardsman are in the city of Baltimore as of Tuesday morning, city officials said. More soldiers are expected to be deployed in the near future.