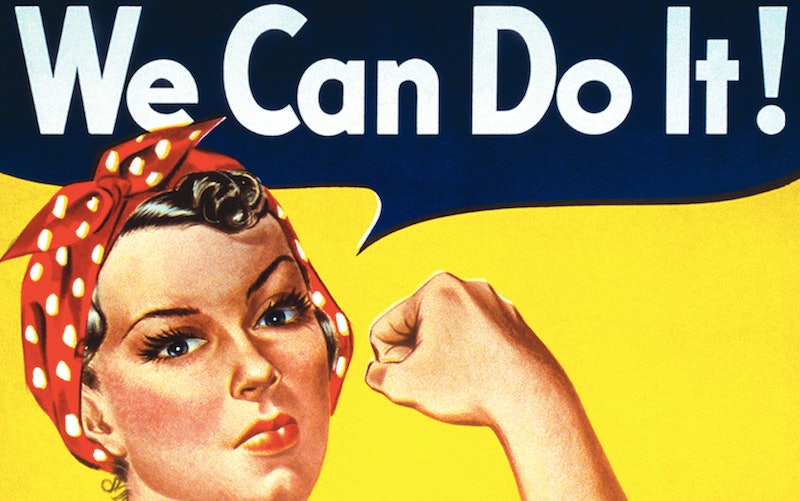 It's hardly breaking news, but it bears repeating: women are integral to the U.S. military, and they always have been.

OK, so maybe you already knew that ... but not everyone does! When former Secretary of Defense Leon Panetta lifted the ban on women in frontline combat positions, it caused a bit of buzz. Of course, this historical decision greatly expanded the roles available to women in the armed forces, but it actually represented a natural progression: after all, women have been providing vital support to our country for the past 240 years.

As always, the best way to combat ignorance is with knowledge! Some readers may be surprised to learn that women disguised themselves as men in order to serve in the Revolutionary War, or that an all-female, all-African-American female unit was integral to the Allies’ victory in Europe during World War II. In other words, we’ve come a long way – but women have been here the whole time.

We've partnered with the U.S. Marine Corps to give you the full rundown on women in the U.S. military, from the birth of our nation all the way up to the present day. The women below will show you that regardless of recent policies increasing the opportunities for servicewomen, the impact of women in our military is nothing new.

Prior to the 20th century, there were restrictions against female enlistment, so many clever women disguised their true identities in order to jump this hurdle. In the late 1700s, Deborah Sampson assumed the identity of "Robert Shurtliff" and served in the Continental Army for more than a year until she was wounded and honorably discharged. This practice occurred well throughout the Civil War and into the turn of the century, when the armed forces began conducting more thorough physical exams.

The first recorded African American female enlistee also disguised herself as a man in order to serve. Cathay Williams served in the Civil War under a clever pseudonym: William Cathay. Shortly after enlisting, she was hospitalized for smallpox. She claimed that an Army surgeon discovered her gender while she was under his care, but she returned to serve until 1868, when she was forced to leave due to medical disability.

In 1779, after the Battle of Fort Washington, Margaret Corbin (popularly known as "Molly Pitcher") became the first woman in the U.S. to receive a military pension. When her husband was killed, she stepped up to man the cannon solo and was seriously injured in the process. Congress voted her disability pension to be one-half of a soldier's pay and one suit of clothes (or the equivalent in cash). In 1804, the U.S. government also awarded the aforementioned Deborah Sampson a pension.

That's right. It may come as a great surprise that there has (1) only been one female in U.S. military history who has received the Medal of Honor, the military's greatest honor, and (2) that this occurred in the 1800s, which was not exactly the most progressive of times. Dr. Mary Edwards Walker served as a contract surgeon for the Union Forces and was kept as a POW by the Confederacy. Although she had the award revoked in 1917, the U.S. Armed Forces restored her name to the Medal of Honor Roll in 1977.

Nurses Paved The Way For Women In The Military

Throughout U.S. history, women frequently provided military support in the form of medical aid. During the Spanish-American War, 1,563 women officially served as contract nurses, but it wasn't until the end of the First World War (1917-18) that women were officially allowed to enlist in the U.S. Army and Navy. More than 33,000 women enlisted in this manner, and 400 died in the line of duty.

When you mention women in the context of World War II, you might initially think of morale-boosting USO performers or women on the home front tending victory gardens and rationing food. There's no doubt that these roles were valuable to the war efforts, but it's also important to remember that women officially served in the U.S. military. Over 400,000 women enlisted to serve in America, Europe, and Asia as ambulance drivers, pilots, nurses, and administrators, among other roles. More than 400 women lost their lives and 88 were captured and held as prisoners of war.

Maj. Charity Adams, the Women’s Army Corps' first black officer, led the 6888th Central Postal Directory Battalion, an all-female, all-African American unit. It is said that every piece of mail sent from the U.S. to Europe passed through this battalion's inspection, thus protecting the Allied Forces from any breaches in intelligence.

There Were No Female Students At West Point Until 1976

Female Task Units Were Integral To U.S. Diplomacy In Afghanistan

In 2009, the Marines Corps introduced a revolutionary (and extremely successful) program to engage Afghani citizens on the front lines. Female Engagement Teams (FET) were trained and deployed to build relationships with Afghani women and children in remote areas of the country. These special units aimed to break down cultural barriers in order to help the U.S. military conduct security searches, obtain information, and provide aid to the people of Afghanistan.

Direct Combat Roles Weren't Open To Women Until The 2010s

After learning how involved women have been on the front lines of war throughout the history of our nation, it's surprising that the U.S. military had an official policy of "no women in units tasked with direct combat" prior to 2013. With Panetta's lifting of the longstanding ban in January of 2013, all units, even those within special forces, have started to review each of their units to determine how and when women will be able to enroll.

In November of 2013, a simple selfie rocked the nation: a picture showcasing the first three women to have passed the Marine Corps' 59-day evaluation course, which would enable them to graduate from the service's enlisted infantry training. (A fourth was unfortunately sidelined due to stress fractures.)

Further strides were made in 2014, when three female officers successfully passed the physically and mentally grueling Combat Endurance Test (CET) in their attempt to pass the IOC (Infantry Officers Course). If they complete the IOC, they will be the first women in history to do so. These women were part of a research study that will determine whether women will be able to serve as infantry officers. A decision is expected in early 2016.

Women have also been granted positions on fast attack submarines. In late 2013, it was announced that six female officers were training to join teams on submarines carrying ballistic weapons. As of 2015, one of the officers has reported to the USS Minnesota and three others are currently training to join the USS Virginia later this year.

The lesson here? There's no limit to what women can do to serve our country — it's what they've been doing all along.

This post is brought to you by the U.S. Marines Corps.