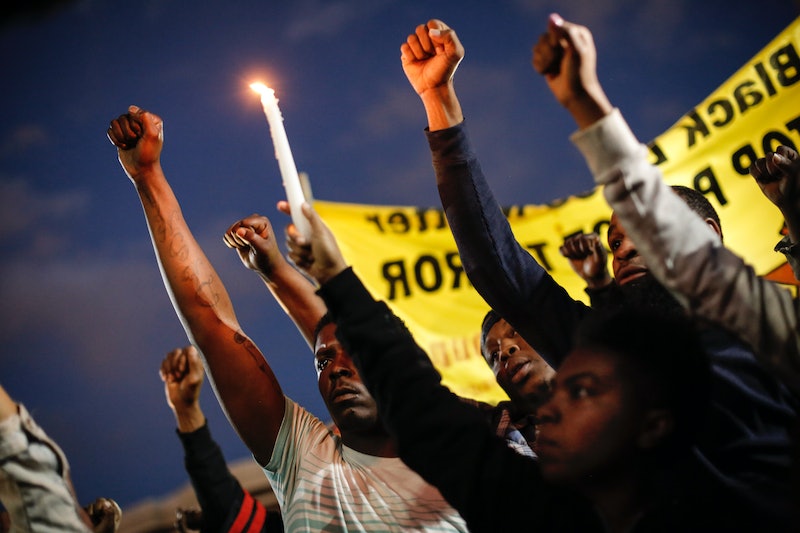 As protests spiraled into riots the day Freddie Gray was laid to rest, the Baltimore Police Department issued an alarming alert. The police force had "received credible information that members of various gangs" were teaming up to harm police officers, the alert said. The statement used some spicier, inciting language, claiming there was a new "partnership" between the Bloods, Crips, and the Black Guerilla Family — a partnership devised to "take out" law enforcement officers in a seemingly violent way.

"This is a credible threat," the Baltimore P.D. statement said. The police force also urged the media to "distribute this information to the public and law enforcement nationwide."

But Monday night, representatives from those three rival gangs said no such partnership to target police officers was made. Members of the Black Guerilla Family, Bloods, and Crips spoke with 11 News at a late-night community meeting, in an attempt to set the record straight.

"We did not make that truce to harm cops," one unnamed man affiliated with the rival gangs told 11 News. "We did not come together against the cops. We're not about to let y'all paint this picture of us. ... Y'all not about to do that to us."

In a separate video, a member of the Baltimore Crips emphasized to The Baltimore Sun that despite the alert from Baltimore P.D., the three rival gangs had no plans of action against law enforcement officers. "You got a Crip here, you got a Blood here," Crips member Charles Shelley told The Sun at a local church meeting on Monday. "We're not here for nobody to get hurt. ... All that about the police getting hurt by certain gangs — that's false."

The Baltimore P.D. notice may have come about after some of the above images of the city's rival gangs bonding together went viral on social media. Contrary to some reporting in both local and national media, which ran with the police force's security alert, local gang members have said they have indeed formed a new partnership — one to foster peace and return justice to their city and its people, they say.

According to The Daily Beast, the three gangs were able to form a truce — with a little help from activists with the Nation of Islam — over the weekend. The gang members have said that their peace deal is in honor of Freddie Gray, and that they are united for the cause.

“I can say with honesty those brothers demonstrated they can be united for a common good,” Carlos Muhammad, a minister at Nation of Islam’s Mosque No. 6, told The Daily Beast.