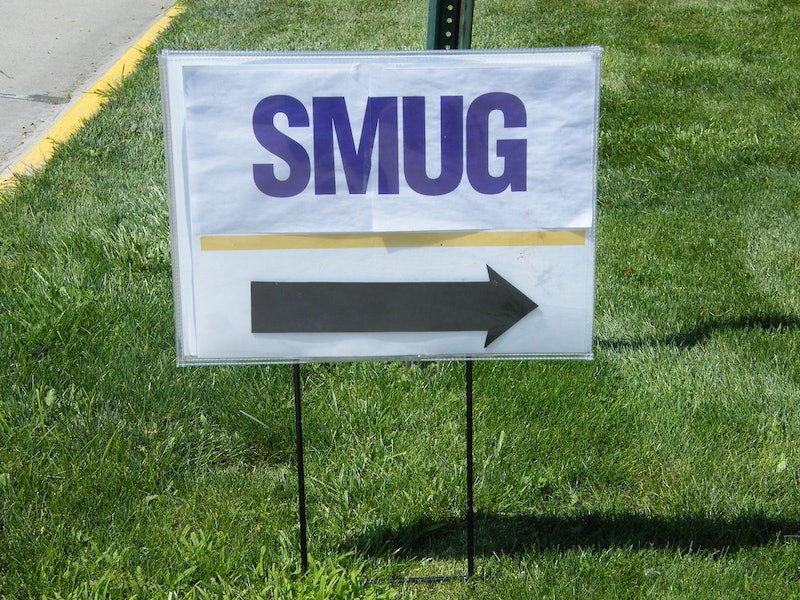 We're all familiar with the term humblebrag, right? Y'know, statements that are ostensibly modest, but which actually say, “LOOK! LOOK AT HOW AWESOME I AM!”? Good, because here is some very important information of which we should all take note: Humblebraggarts are officially the worst, and science has irrefutable proof. So let's all stop with the humblebrags, shall we? If no one likes a humblebraggart, and generally we all want people to like us, it stands to reason that the best way to accomplish the latter is to stop with the false modesty.

The paper in question comes to use from a team of researchers at Harvard Business School. Using five different experiments, researchers Ovul Sezer, Francesca Gino, and Michael I. Norton attempted to get to the bottom of this whole humblebragging thing — and their results? Well, let's just say that most of us would probably do well to take what they found to heart: It turns out that humblebragging has a tendency to backfire more often than not. You can actually read the whole paper for free here; for those of you who are short on time, though, here's what happened during my two favorite experiments.

This one? Was definitely the most practically applicable experiment, because it finally provides an answer to an age-old job interview conundrum: How do you answer the question, “What's your greatest weakness?”

122 college students from an unnamed university in the Northeastern United States took part in an online survey which asked them to write in detail how they would answer that oh-so-loaded question. They were also asked to explain why they answered as they did. Then, two independent coders who were not informed of the experiment's hypothesis were asked to categorize the responses as either humblebrags or honest answers containing actual weaknesses. Finally, two more coders — also blind to the experiment's hypothesis — were asked to rate whether or not they would be interested in hiring each of the participants based on their responses.

The results? A whopping 77 percent of the responses were coded as humblebrags — and even more tellingly, the coders who were instructed to state whether they would hire the participants were on the whole uninterested in those who humblebragged. So there you have it: When you're in a job interview, answer “What's your greatest weakness?” honestly — not with what you think the interviewer wants to hear.

For another experiment, the researchers recruited 302 participants via Amazon's Mechanical Turk crowdsourcing marketplace. All participants were randomly assigned to one of three conditions — humblebrag, brag, or complain — and, accordingly, shown one of the following statements: “I am so bored of people mistaking me for a model” (humblebrag), “People mistake me for a model” (brag), and “I am so bored” (complaint). Participants were then asked to rate how much they liked the person they were told made the statement on a scale of one to seven, with one being “not at all” and seven being “very much.” They also rated how sincere they thought the person was and how credible they thought the person was. Lastly, participants rated the extent to which they thought the person who made the statement was complaining, bragging, or humblebragging, as well as answering some demographic questions.

How Not to Be a Humblebraggart:

So what do we take away from all this? Don't humblebrag. It's pretty much in the same vein as fishing for compliments — and it pretty much always has the opposite effect of what you intend it to accomplish. Here, let's take a look at a few examples, shall we? Twitter is kind of the home of the humblebrag, so here are five of them — and what you can do to make them a bit more palatable:

Try: Bragging. “Sometimes people I don't even know give me compliments. It feels awesome!”

Try: Bragging. “A ride on the corporate jet? Heck yes!”

Try: Bragging. Either “Seeing Peter Mayhew speak at #StarWarsCelebration is pretty great” or “Peter Mayhew follows me on Twitter!” will fit the bill, depending on which piece of information is more important to you.

Try: Complaining. “I want a cookie and I don't have one.”

Obviously these are only a small selection of the sorts of humblebrags one might encounter in the wild; head on over to the Humblebrag Twitter account, the mastermind of which literally wrote the book on humblebragging, for more.

More like this
Black Women's Equal Pay Day Highlights An Upsetting Problem
By Brandi Neal
The Spiritual Meaning Of Angel Number 000, Explained
By Kristine Fellizar
TikTok's Butter Board Might Be The New Cheese Plate
By Emma Carey
8 Completely Unserious Tips To Make Your Cuffing Season A Success
By Ginny Hogan
Get Even More From Bustle — Sign Up For The Newsletter