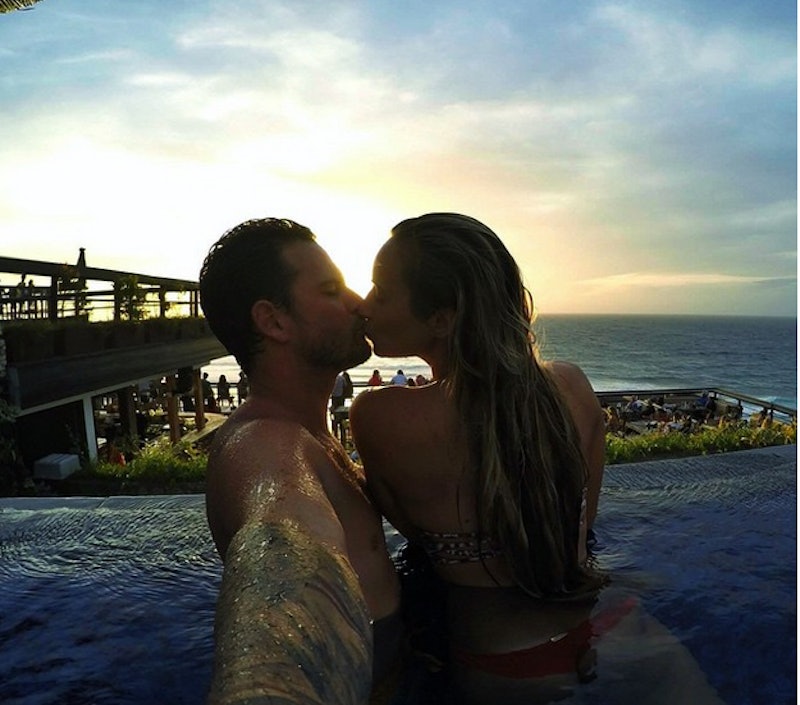 Everyone knows a couple that's more worldly, glamorous, and photogenic than you could ever hope to be, all while being so darn cool that you can't hate them like your inner 13-year-old wants to. If you haven't personally had such an experience, you'll understand after you hear about Charlotte Durgeat and Jesson Vedel, the globetrotting soulmates whose Instagram is the stuff of your wildest fantasies. You know, the ones you have around day three of being trapped in the library during finals, that usually run along the lines of "I'm going to give up everything and run to Bora Bora with the hottest person I can find." Presumably Durgeat and Vedel, who are both from Tahiti, aren't running away from undergraduate finals, but they have spent time in Bora Bora. According to Elite Daily, the (ridiculously attractive) couple fell in love at first sight last April and, presumably after they tired of basking in each other's hotness, decided to travel the world together. Luckily for the rest of us who have to content themselves with dreaming of a life spent wandering the globe, they also decided to bring along a Go Pro camera to record their international adventures on Instagram. Whether it's pictures of the couple chilling at home in Tahiti...

Or peacefully waiting out passport issues in Sydney, Australia...

You're probably going to have to quell the urge to sell all your worldly possessions and go on an adventure of your own. Luckily, if you want to follow suit, Vedel's Instagram gives you plenty of ideas on where to start.

How about Bora Bora?

Or, if you'd rather stay Stateside, there's always Trestles in California.

Hikers can start their travels by scaling Mont Marau.

If you're not half-seriously planning a trip to French Polynesia by this point, you're made of stronger stuff than I. For more breathtaking photos, check out Durgeat or Vedel's Instagram pages.

More like this
A Guide To All Of Zach Shallcross' 'Bachelor' Filming Locations
By Brad Witter
6 Organizations Fighting Police Brutality That You Can Support Right Now
By Syeda Khaula Saad and JR Thorpe
21 Galentine’s Day Memes To Celebrate Your Best Friends
By Meghan Bassett and Mia Mercado
23 Super Sweet Things To Write In A Valentine's Day Card
By Karen Belz and Lexi Inks
Get Even More From Bustle — Sign Up For The Newsletter
From hair trends to relationship advice, our daily newsletter has everything you need to sound like a person who’s on TikTok, even if you aren’t.