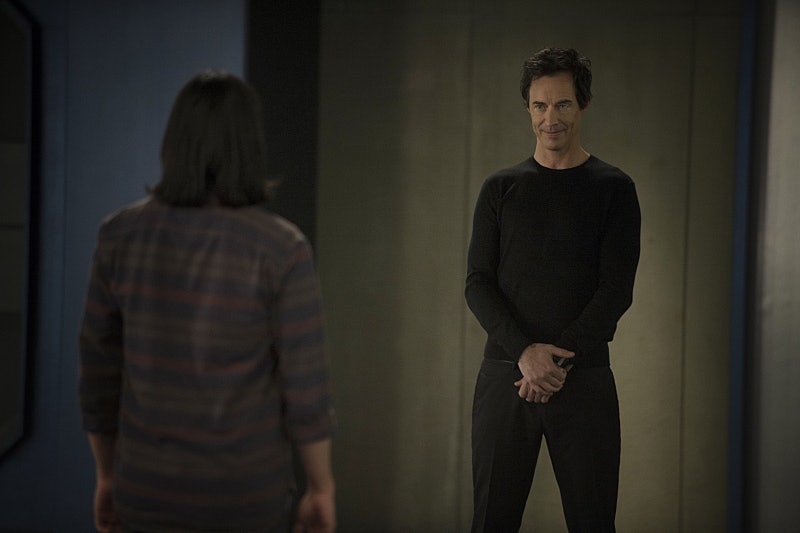 For an episode titled, "The Trap," I'm kinda upset that no one during Tuesday's The Flash yelled, "IT'S A TRAP" like Admiral Ackbar in Star Wars. It would have been fitting, considering the many other pop culture references Cisco made leading up to setting a trap for Harrison Wells. And Barry, Caitlin, Joe, and Cisco's plan to trap Wells almost worked. Except that it didn't, because Wells is always one step ahead of our gang, and during his escape from the trap, he grabs Eddie of all people. There's a reason for it, though. We've always known that Eddie carries the surname of Thawne, and now we know that Eobard Thawne is really the Man in the Yellow Suit. But how are Eddie and Eobard connected?

Early on in the episode, Eddie asked Joe if he could ask for Iris' hand in marriage. Sweet, but we know she's still got feelings for Barry she won't admit. Joe tells Eddie no. Eddie decides to go along with the marriage proposal anyway, and he's so close to asking her when the Reverse-Flash shows up. I assumed he was there for Iris, since that had been mentioned a few times throughout the episode. Turns out, Reverse-Flash was there for Eddie. Before Barry could stop him, Eddie disappeared with the yellow streak, off to some sketchy undisclosed location.

Since Eddie's been let in on this whole "speedster situation," he tells the Reverse-Flash that he knows he's the Reverse-Flash. That's when Wells' pulls off his yellow mask to reveal his face, and calmly explains to Eddie his real identity. He's Eobard Thawne. He then informs Eddie that they're related.

Eddie's quick to point out that he hasn't seen Eobard around at the family reunions, and Eobard tells him he's from the future (not in such specific terms, but he makes mention to the fact that he hasn't been born yet). Needless to say, Eddie is really freaked out. He also remembers how during the first trap for Reverse-Flash back at Christmas, Eddie was spared — has this whole thing has always been about him? Is Reverse-Flash here for Eddie and not Barry?

Nope, Eddie, not so fast. It's not about you, you're just the insurance for whatever Wells — sorry, Eobard? Do we call him that now? — wants.

Don't think about their family relationship too hard, because it'll make your head hurt. Bottom line is that these two guys are connected, and The Flash has just dropped a huge Thawne bombshell on us. Doubtful that Iris is gonna want to marry into this family now.