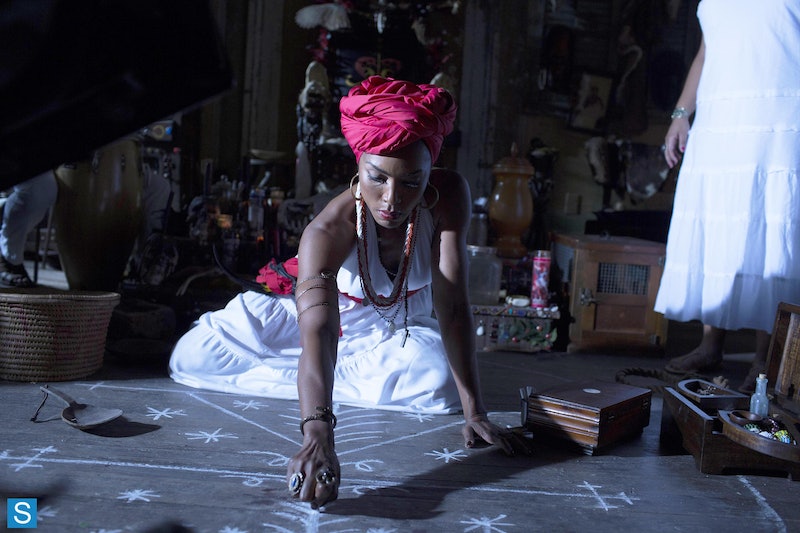 The minotaur can’t be dead, can he? No, no, I won’t accept it. I can’t. Wasn’t it just yesterday — or more accurately three weeks ago — that we were introduced to our sexy, bull-headed friend? “What secrets he must have!” we excitedly chirped. “What great scenes in which he gores one or several people before being put down by a magical spell of some kind, or probably a Mummy!” Right now, four episodes in, we’re looking at a bullhead in a box. That certainly shouldn’t be taken as absolute proof of death — not with his lover, Marie Laveau, the all-star voodoo priestess she is — but at least right now, the guy is sidelined. It’s just a bummer.

Then again, we’ve got about 50 other plotlines to keep us busy this week, so we can table our Greek mythology-related depression for at least the moment. There are Thomas Kinkade chat room sex murders to discuss!

What’s going on with Kyle?

Last week we were treated (probably the wrong word) to a rather unorthodox mother-son bonding session, one more entry in a years-long list of sexual abuse. Zombie Kyle had finally had enough, though, and sensibly bashed his mother’s head in with one of the trophies lining his wall. THIS week, realizing that the boy she loved was probably gone forever, Zoe decided to mix some rat poison into Kyle’s tuna casserole. But too late — Kyle had already escaped into the Halloween night, presumably to blend in among other freaky-looking people. Something tells me it won’t be long before his Stevie Nicks-loving healer is back on the scene…

What’s going on with Queenie?

Oh, right, she was GORED BY A MINOTAUR AFTER TRYING TO SEXUALLY STIMULATE THE THING THROUGH VOODOO. Left for dead, it’s only by the grace of… well, not God that she’s brought back to life, by Fiona. And thank God, because she later gets the line of the episode when describing Madison to the Witch Council trying to ascertain the missing witch’s whereabouts. “She likes big dicks and trouble. If she’s dead, it’s probably because she tried to give the Grim Reaper a hand job.” No finer line has been uttered on television yet this season.

What’s going on with Cordelia?

Not much is going on with Cordelia. Her husband on the other hand is just SWIMMING in intrigue in Baton Rouge, where he’s turned a construction job into a murderous sex romp with the redheaded ghost maid from Season 1. She’s not playing the same character here — in Coven she’s a Thomas Kinkade enthusiast and online dater — but then she’s not meeting a different end. Hank shoots her through the head, making us question for the first time on this show whether these characters are exactly what they seem!

What’s going on with Marie Laveau?

So her minotaur boyfriend’s head is sent back to her in a box, which doesn’t do wonders for business at the hairdressers that day. Still, Marie’s not one to let something like a severed minotaur head get her down — no, she sets to work immediately on making herself productive in the NOLA community. Which, for her, means unleashing an army of undead to descend on Ms. Robichaux’s school. Did I mention that at least one of the zombies is Delphine’s exhumed daughter?

What’s going on with Delphine LaLaurie?

She knows a minotaur is still after her, even momentarily “dead.” Her daughter’s just shown up at her doorstep, except as a zombie. LaLaurie is not having the best day here.

What’s going on with Spalding?

SPALDING! We all knew it was coming, the revelation of just how he came to lose his tongue. And tonight’s episode delivered a wonderful, creepy flashback that showed us exactly what happened. First: Spalding, having witnessed Fiona’s murder of the former Supreme, is a liability in the murder investigation. Second: Fiona’s enemy, Myrtle Snow (today played by Frances Conroy), realizes that she can cast a spell to make Spalding reveal the truth. Third: Spalding catches her plotting this. Fourth: Rather than testify against Fiona, the “love of his life,” Spalding opts to cut out his own tongue. And there you have it! BONUS: Today, Spalding hosts a prodigious doll collection and, oh, keeps the corpse of Madison in a nearby chair for some as yet unrevealed reason (although one suspects it could just be because he’s friggin’ creepy).

What’s going on with Fiona?

“Whos’ the baddest witch in town?” she asks a mirror, putting on a traditional witch’s hat. You are, Fiona! Not just for the way you murdered Madison, the presumed next Supreme, but for the way you deflected all of the High Witch Council’s questioning and managed to drive Frances Conroy nuts in the process. Don't ever change!