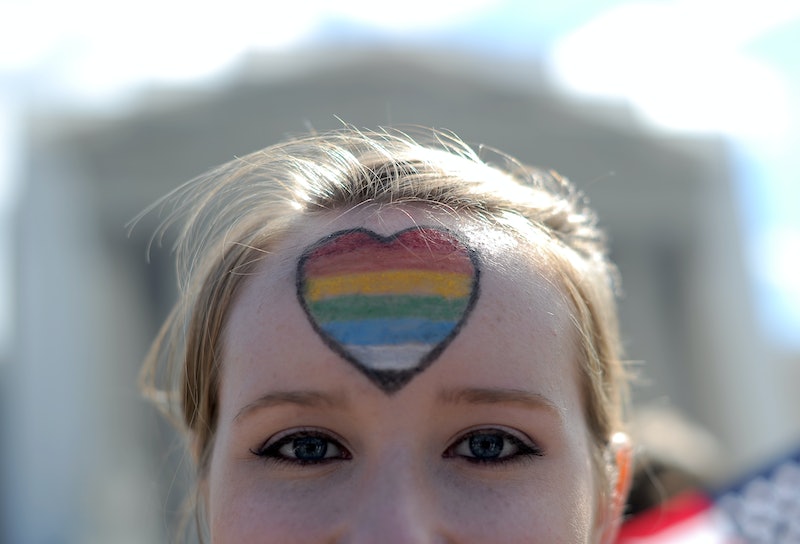 On Tuesday, The Supreme Court (hereby referred to lovingly as SCOTUS) heard arguments on the constitutionality of select states’ bans on same-sex marriage. As with most cases that make it all the way to SCOTUS, the facts are messy, but simply put, nine black-robed individuals will be deciding whether or not all 50 states have to allow same-sex marriages; and if not, whether states that don’t allow them will have to recognize out-of-state gay couples who were married in states that do.

As exciting as a ruling would be, to be honest, I find the whole thing absurd.

I grew up in the heart of New York City's Chelsea neighborhood, which has one of the highest gay populations in the country. I attended preschool at The Chelsea Day School, where many of my friends had gay or lesbian parents. I then spent thirteen years at Friends Seminary in downtown Manhattan, a Quaker K-12 school where roughly 30 percent of the faculty was openly homosexual, including the principal.

Because of my unique upbringing, I never experienced what you might call a “gay learning curve.” No adult ever explained to me what a gay person was, or told me whether or not their sexual orientation was OK. Some of my friends had two moms, and some had two dads, just like some people’s parents were lawyers and others were accountants. I wasn’t just raised to support gay marriage — I was raised in a world with no distinction between "gay" or "straight" marriage in the first place. It was all just marriage.

If growing up around homosexuality my entire life was so damaging to the institution of marriage, then how did I end up a straight woman with every intention of entering into a heterosexual marriage one day?

Of course, I wasn’t totally naive that there was a world outside my own, but I chose to pretty much ignore it until I left for college. I figured my liberal college would allow me to stay in the bubble a little longer, so you can imagine my shock the first time I heard someone use the F-word. That word alone would have gotten you expelled at my high school, yet here were my new guy friends just throwing it casually into conversation. Was this how everyone spoke outside of Quaker School?

I had several more experiences with the “homophobia learning curve” during my four years of college, all of which left me confused and angry. There was my Constitutional Law Seminar, in which I was forced to read Antonin Scalia's opinions on homosexuality (spoiler: they’re not pretty). There was my sort-of-boyfriend who drunkenly screamed at me when I asked him to stop using the F-word. And perhaps hardest to swallow was my real boyfriend, whose parents held views completely opposite of everything I held to be true.

Now that I’m 25 and back living in New York City (sadly, in a less “gay” neighborhood), I find my patience waning for those in opposition to gay marriage — especially members of SCOTUS. With cases like the ones presented Tuesday, I cannot wrap my mind around the fact that nine individuals will get to determine whether or not my friends and family get to marry the people they love.

Perhaps the argument in support of banning same-sex marriage that irks me the most is the one which claims that gay marriage somehow diminishes the institution of marriage for heterosexual couples. As someone who grew up in a world with both sexual orientations on an equal playing field, I spent the first 18-years of my life witnessing the illegitimacy of this argument.

How is my parents’ nearly 40-year loving marriage cheapened because there were gay couples on their PTA board? If growing up around homosexuality my entire life was so damaging to the institution of marriage, then how did I end up a straight woman with every intention of entering into a heterosexual marriage one day?

Haters of SCOTUS and beyond, I’m here to tell you: many young people like me have already been exposed to your worst-case scenario, where gay families stand as role models of what long-term commitment can look like. And you know what? We all turned out just great. I've seen "the future," and it is nothing to be afraid of. So, please, get out of the way.