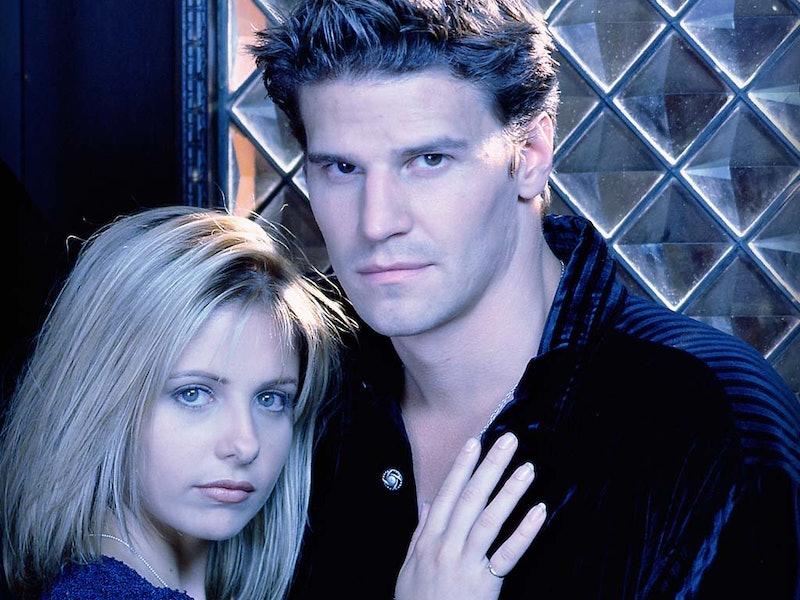 Next up in our “What the heck does that slang term or acronym mean?” series, we have this: The meaning of “OTP.” Apologies to anyone reading this who already knows what the acronym means; not all of us are that hip and “with it,” so to speak, so sometimes, we need to play catch-up. How else are we going to keep up with this rapidly changing linguistic landscape of ours?

“OTP,” as it turns out, is big in the world of fandom shipping. Although many of my favorite things have huge fandoms, don't often participate in that particular aspect of them; for some reason, I just prefer to watch my Doctor Who alone. That's just me, though — but it does explain why I was unfamiliar with the term “OTP,” despite begin incredibly familiar with a lot of the situations in which it can apply. Here's what my research so far has yielded:

In short, “OTP” stands for “One True Pairing.” It's used in fandoms to describe any given participant's favorite couple — or couples, because, perhaps contrary to the term's very definition, you don't have to limit yourself to just one OTP (and no, they don't have to be canonical). Usually, though, the characters or people who make up any OTP will not occur in more than one pairing for any single fandom member. Less commonly used is the term TTP, or Two True Pairings; if you can't make up your mind about an OTP, then TTP might be substituted instead. And if you're into romantic arrangements that involve more than two people? Try OTT (“One True Threesome”) on for size. Other variations include BroTP — a portmanteau between “bro” and “OTP” that refers to a non-romantic OTP — and parodic versions. The example TV Tropes gives of this last one involves shipping a character and their favorite food.

Folks who have an OTP or two may write and/or read fanfiction about those couples, but necessarily. Regardless as to whether you're into fanfic, though, the one defining feature all OTPs have is this: We get incredible emotionally invested in them. As a voracious reader who often doesn't want my favorite books to end, I know those feels.

So where does the term come from? According to Know Your Meme, the earliest known usage of OTP occurred on LiveJournal in October 2002. The term popped up in reference to potential pairings of NSYNC members: Wrote LiveJournal user Betty Plotnik, “Joey/Lance: In some ways, this is my OTP, if by 'true' we're talking about what I really think is canonically possible.” Given the way the term is just casually dropped in here, though, I suspect it may predate this particular post. In any event, though, the acronym was first defined on Urban Dictionary in September of 2003 — a definition which is unfortunately riddled with spelling errors, but which pretty clearly describes what the term means and how to use it:

“OTP: One True Pairing. Used in fandoms to espress [sic] what charaters [sic] you ship (put together romanticly [sic]).”

Fun fact, by the way: Fan fiction and shipping as practices are old. Like, really old. I'm not just talking a few decades; I mean just about a century. Know Your Meme reports that, in 1913, a book called Old Friends, New Fancies was published, which basically created a brand new crossover story featuring characters from three different Jane Austen novels: Pride and Prejudice, Mansfield Park, and Northanger Abbey. Consider it Kindle Unlimited for the pre-digital age. Interesting, no? It kind of makes you wonder if there are other examples out there that are even older.

Now let's take a look at a few examples. Because I feel somewhat uncomfortable shipping real people (because, well… they're real people), the examples I'll give here are all drawn from fiction. I don't know about you, but I'd feel really weird reading a fictional story featuring myself as a real person paired up with someone I probably have no interest in dating.

Yes, I know these two both ended up with other people, canonically speaking; what's more, as Evanna Lynch, who played Luna in the Harry Potter movies, put it to Seventeen in 2016, Neville likely would have been too much of a "homebody" for the adventurous Luna. I still think they would have made a terrific pairing, though, and clearly I'm not the only one; according to the Fanlore Wiki, the pairing of Neville and Luna has a devoted following.

Not my personal OTP, but the canonical OTP. I'm sure there are many out there for whom this one is the be-all, end-all, too; after all, they're often cited as one of the greatest TV couples ever. Of course, things changed once the comics continuing the show's storyline began being published — all of the characters (not just Buffy and Angel) have had tons of romantic ups and downs as the years have gone on — but if you haven't kept up with the expanding Buffyverse after the seventh season aired, then the buck stops with these two star-crossed lovers.

Leslie Knope isn't the only beloved TV character with a fondness for Waffles: Hiro Nakamura, Heroes' resident time-and-space manipulator, also regularly referenced them as one of his favorite foods (particularly chicken and waffles). The Hiro/waffles pairing can be considered an example of an OTP parody, as noted by TV Tropes — although to be fair, waffles are pretty awesome.

The internet tells me that fans of this particular OTT like to call it THEJOBB. The ending of Game Of Thrones might... uh... complicate this trio a bit (although it's already pretty complicated, given that they were all raised as brothers and are literally related in a bunch of ways), but it does seem to be A Thing.

The pairing of James T. Kirk and Spock is so iconic that, as SyFy Wire recently noted, it "literally invented slash (as in, literally, how fandom utilizes the '/' symbol)." Whether you're into Star Trek: The Original Series or the more recent reboot universe, these two get each other like no one else.

More like this
The Spiritual Meaning Of Angel Number 000, Explained
By Kristine Fellizar
10 Stranger Things-Inspired Halloween Costumes For True Fans
By Emma Carey
Deliveroo Is Selling Lotus Biscoff Cinnabons Now
By Darshita Goyal
6 'Game Of Thrones' Halloween Costumes That Aren't Overdone
By Nina Kahn
Get Even More From Bustle — Sign Up For The Newsletter