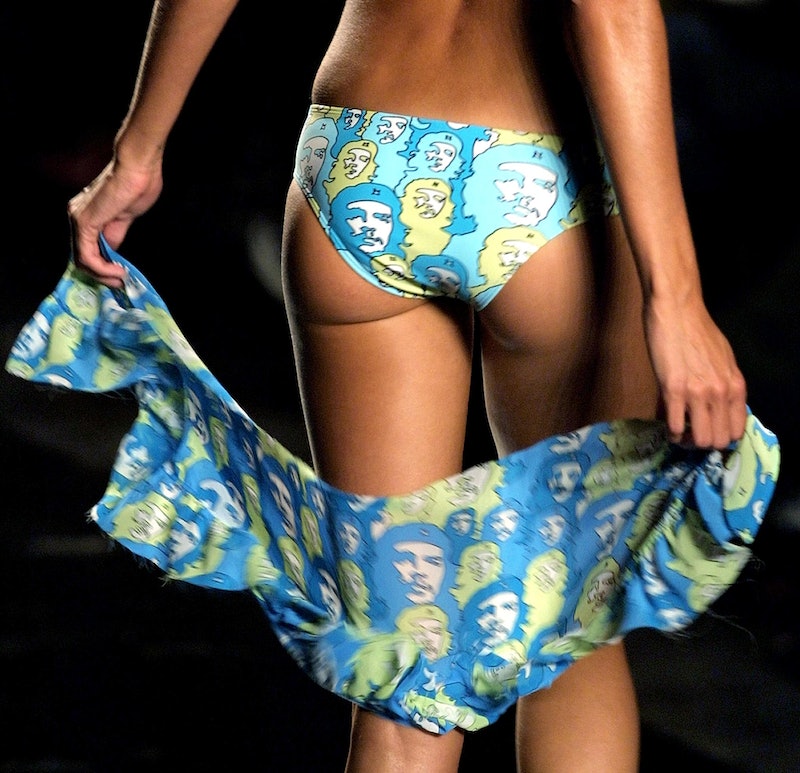 Living near a river most of my life has meant more than two decades of getting my water sprite on the Pre-Raphaelite way: hairless below the neck. Thanks to dozens of painful zaps, my underarms and bikini area look like Titania’s, but reaching this level of silky smooth was no fairy tale — laser hair removal hurts like a $%^&*.

Over the course of more than a year, I underwent nine laser hair removal sessions, each lasting about the length of a lunch break. That level of convenience came with financial and physical sacrifices I was in the privileged position to make. So hear me, ye mortal birds as I yarn my tale of woe, but know I recognize this treatment was a luxury and I brought the pain upon myself. What follows isn’t a whine fest so much as an FYI fest.

Even when it comes to vanity, you should make informed choices, especially when your body and health are involved. So I approached researching laser hair removal the same way I would a medical procedure, not a spa treatment. Unlike waxing, which removes hair from the follicles and lasts a matter of weeks, laser hair removal lasts years because it actually stops a hair follicle’s ability to grow hair.

Because this is a permanent decision, I chose a treatment center that employs licensed medical and nursing professionals who use FDA approved equipment. Groupon deals are great for some cases, but this isn't one of them. My center does hair removal and only hair removal, and is as clean as a clinic.

When I walked in for my first treatment, the center’s staff gave me the princess treatment with refreshments, a selection of upscale magazines, and a goodie bag full of toiletries. That’s because they were going in for the kill. I’m naturally shy and ticklish, so I’m not sure how much of the psychological influenced my perception of physical pain. Regardless, it hurt, and the latest issue of Vogue and a cup of herbal tea were strategic distractions meant to put me at ease.

Let me explain what I mean by “hurt.” At every session, I had a stress ball in each hand. I shrieked curses and bit my cheek and/or tongue on more than one occasion. Each zap lasted a split second and burned, with the moments in between zaps not allowing much relief. After the nurse finished treating a spot, she put an ice pack on it to numb the pain. At the end of the session, she rubbed aloe lotion on the treated spots.

There was one time when the pain was beyond teeth-gritting bad. But, first, some background: I’m a tricky case for laser hair removal because of my medium skin tone. The ideal laser hair removal candidate has dark hair and fair skin. I am light olive, which means that neither of the treatment center’s two wavelength lasers was a perfect fit. The laser with the longer wavelength is typically used on people with a dark complexion; the one with a shorter wavelength is used for people with a fair complexion. As you undergo treatment, the strength of the laser is gradually increased with each session.

When I went to get dressed, I would always marvel at my reflection: my treatment area was pinker than a five-year-old’s birthday party. I also stank of singed hair. Usually the treatment area burned for the next hour or so before the annoyance subsided. Three days to a week post-treatment, my hair would start to grow out and shed, so I’d have to exfoliate the area like crazy. This usually added a few minutes to my shower (and singing) time.

After my first treatment, the nurse recommended a few ways to assuage the pain in the future. One tip was to pop a painkiller about 30 minutes before my appointment. Another was to apply numbing cream an hour before treatment. Yet another tip was not so much recommended as it was relayed based on hearsay. “Other patients,” the nurse said, swore by treating themselves to a shot or a glass of wine. Avoiding caffeine the day of the appointment was supposed to help, too, as was scheduling far out from my period. Caffeine puts you on edge; menstruation makes your skin more sensitive.

I tried all of these tactics (except for knocking back one since I normally scheduled the treatment during the week and had grown-up things to do post-treatment). Twice, I had the misfortune of undergoing treatment when Aunt Flo came to visit, and it definitely made things worse.

Also, I was put on the longer wavelength laser at too high of a strength too soon and was slightly burned. I knew that the treatment hurt more than it should, but I attributed that to being on my period, not an error in the nurse’s judgement. I ended up with a couple of little scabs as a result. The following day, I called the center and returned for a tube of Hydroquinon cream. I applied it and ended up being fine but it was no party. It also wasn’t the only disappointment in my laser hair removal experience.

Since puberty, my natural hair color has been a medium ash brown — or so I thought. It turns out I have more blonde hairs than I would’ve guessed, something common for many brunettes. The laser does not work on blonde or gray hairs. While my hair has been greatly reduced, I still have gold down in spots I expected would be totally hairless by now. The hair is significantly softer and thinner than what once prevailed, but is still be visible in direct sunlight. It only takes a quick swipe of the razor to remove and for that, I am grateful because my bathing suit prep once required much more.

I recommend laser hair removal if you wish to remove your naturally dark, thick hair. For those accustomed to regularly waxing or shaving, laser hair removal does save time and money in the long-run. For those living in colder climates, it may not be worth it. Don’t go into debt for laser hair removal, either (#priorities, people.) Some treatment centers offer interest-free loans or payment plans, as mine does. If you can’t or don’t want to pay the lump sum up front, go for one of those.

This will be my first bathing suit season after laser hair removal. Thomas Sully fantasies, here I come.

More like this
How To Protect Your Scalp From The Sun, According To Derms
By Paris Giles
Kiehl’s Just Launched Eco-Friendly Cleansing Bars
By Jessica Morgan
Regé-Jean Page On The Art Of Power Napping
By Paris Giles
How To Style Your Hair For A Festival, According To Maya Jama’s Hairstylist
By Tomi Otekunrin
Get Even More From Bustle — Sign Up For The Newsletter