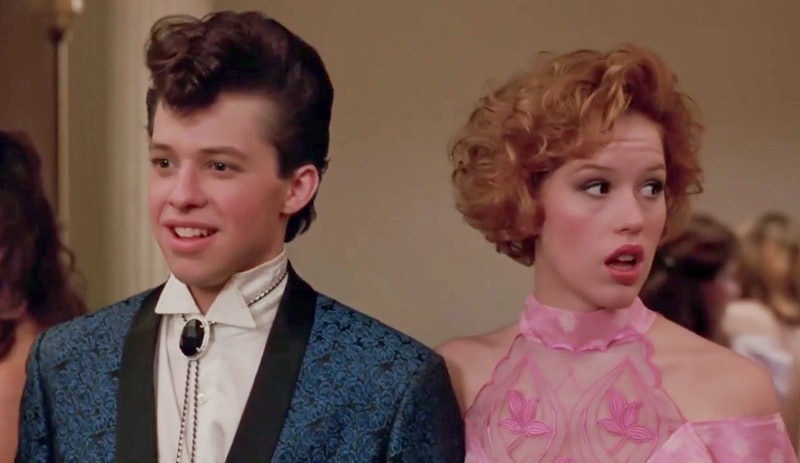 Spring is fully in swing, and unless you're currently between 15 and 18 or the parent of a child that age, it probably hasn't been on your radar, but prom — or #prahm as the kids are gramming it these days — season is officially underway and it's time to get festive, no limo required! With all the spray tans, fake rhinestones, and bad decisions (or was that just me?) of a modern prom, it's hard to imagine how and why this tradition got started, but surprisingly, it sprung out of a very well-intentioned beginning. So I've compiled this CliffsNotes version of the history of prom to celebrate this very special time of year — a true rite of passage since, according to Statistic Brain, 3-5 percent of U.S. teens lose their virginity on prom night.

Prom is still alive and well in our culture today, and therefore has very contemporary connotations, but prom is actually older than sliced bread. Literally. Sliced bread hit the shelves in 1928 thanks to Otto Rohwedder's groundbreaking invention — a good 50 years after prom sashayed into the American zeitgeist!

The why of prom’s origin story is simple to answer. Prom, short for promenade, “the formal, introductory parading of guests at a party,” began in the mid- to late 1800s at colleges and universities in the Northeast to promote social etiquette and manners in each year’s graduating class. Ironic considering how much debauchery prom has under its belt, right?!??

Early citations of prom link it to the annual Ivy League tradition of "'presentation week,' during which formal dress and dancing accompanied a promenade concert," and include mention in a 1879 issue of the Harvard Crimson, wherein their Yalie rivals are made fun of for being cheap (how apropos):

Full many a dollar have they,..Which neither the Ball Club nor the Boat Club nor the Junior Prom. Com..nor the Lit. nor the News..can from their pockets tear.

There's also a widely referenced 1894 diary entry of a student from the then all-male Amherst College, which gave his account of being invited to and attending a prom at nearby women's school, Smith College. Then after the turn of the century, prom events expanded to high schools, as well, for much the same reason they were started on the university level.

The very early ones were like those held at colleges: the senior class, dressed in their "Sunday best," gathered in the gym for tea and light refreshments, socializing and dancing under crepe paper streamers and the watchful eyes of chaperones.

By the 1930s, prom had become as American as baseball and apple pie, and they were now being held coast-to-coast, swapping the light refreshments and dancing under crepe paper streamers of yore for full-blown dinners with local bands providing music and entertainment — and in the 50s, the boom of the post-war economy footed the bill for high school gymnasiums to be supplanted by more elaborate venues like country clubs and hotels.

The grandest prom venue of all was procured by Susan Ford, the daughter of President Gerald Ford, in 1975 when she hosted her senior prom at the White House — the first and only First Kid to hold the honor, even to this day.

It was Susan's Holton-Arms School classmates who practically forced the headmaster to inquire, and after the President and First Lady agreed, the event was held in the East Room and covered by People magazine and the Washington Post. I love that while other kids' parents were surely begging to be chaperones, President and Mrs. Ford got to skip out on the prom entirely... though I suppose an important diplomatic mission to Europe is a good excuse.

In a piece on the etymology of prom, Slate featured this cool chart pulled from the Google Books Ngram Viewer that plots the prevalence of prom-related terminology since 1900. Interesting to note is the pronounced dip in all references to prom throughout the 60s and 70s — perhaps, as the article infers, due to the exigent cultural and political issues of the time, such as the Vietnam War and the anti-establishment movement.

But — praise be! — there was a resurgence in the 80s, which kept pace in the 90s, and hit its peak in the early 2000s, paving the way for a plethora of awesome, prom-centric teen movies over the past few decades: Pretty in Pink, She's All That, Mean Girls... I mean, c'mon, how lucky to be alive during this exciting renaissance!

And thankfully, as societal norms evolve, especially in terms of race, gender, and sexuality, proms are changing their values, as well. A 2010 Time article, "Brief History: The Prom," was decidedly negative about how slowly prom was catching up to the shift in cultural mores. However, the last five years have been a boon for acceptance, and now it seems the headlines skew more positive, with transgender prom queens and prom kings who have Downs syndrome.

Unfortunately, there is still the occasional incident like these Colorado teens who posed for prom pics with a Confederate flag, but that seems to be the exception, not the rule. What mostly makes the viral rounds these days are sweet kids taking grandparents to prom who missed it the first time around because they were too poor or off fighting in a war — which may actually be the type of social grace that our forefathers meant to bestow us with when they conceived of prom waaaay back before sliced bread was even a twinkle in Otto Rohwedder's eye.

Aww, turns out young folk aren't so bad after all, as evidenced by good old-fashioned prom!

More like this
What To Know About Martin Bashir After Watching 'The Crown'
By Bustle UK
35 Holiday Trivia Facts That Will Impress Your Guests This Year
By Lauren Grant and Emma Carey
44 Impressive Secret Santa Gifts That Won't Break The Bank
By Sadie Trombetta and Lauren Grant
The Correct Way To Start An Advent Calendar, Explained
By Kaitlyn Wylde and Jay Polish
Get Even More From Bustle — Sign Up For The Newsletter