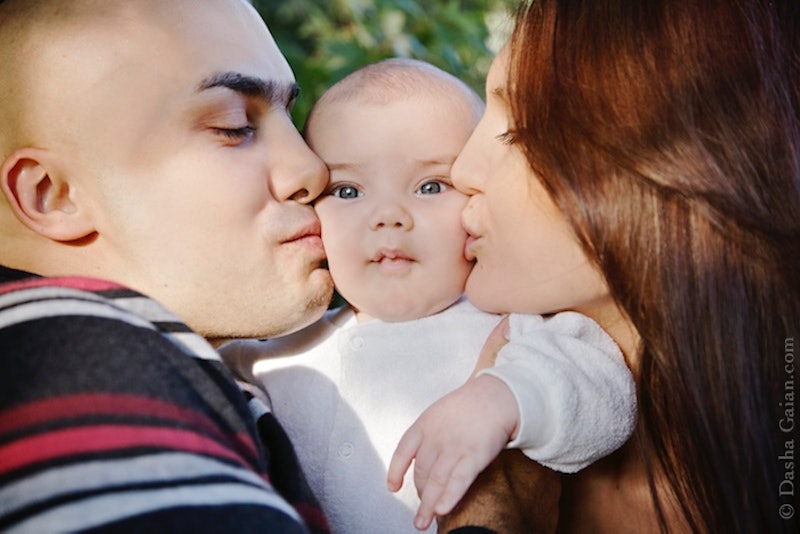 It's an assumption enshrined in children's nursery rhymes: first comes love, then comes marriage, then comes a baby in a baby carriage. But it turns out that there might be a long wait between marriage and the baby — and moreover, that wait time can look very different depending on which state you're in. So which married couples become parents the soonest after saying "I do?"

Overall in the U.S., the average time a couples waits between getting married and having a baby is about three years. This seems a little short to me, but maybe that is just because I am mildly terrified of another human life depending on me for anything, given that I can't keep a plant alive for longer than a month. I am not entirely convinced I'm actually qualified to keep myself alive, actually, but no one seems to have noticed yet. (Fingers crossed.)

Still, according to data from the U.S. Census Bureau and the Centers for Disease control, who keep track of this sort of stuff, American women are an average age of 26 when they get married and 29 when they have their first child — though obviously it varies greatly person to person. Ad even state to state: Like most things in the U.S., every state is a little bit different when it comes to getting married and having kids.

So which couples have the longest "honeymoon phase" — aka the time between getting hitched and getting knocked up? Well, here are the states where the honeymoon phase is longest and shortest.

In New Mexico, women are on average 26.4 when they get married and 28.7 when their first child is born — meaning they have an average of 2.3 childless years of married life. At least until they eventually become empty nesters, that is.

South Carolinans are 27 years old, on average, when they get married, and 29.2 when their first child is born. That means they have an average of 2.2 years between the wedding and their first child.

In Mississippi, people get married at an average age of 26.1, which is pretty consistent with the national average. However, they also tend to have a baby almost a year younger than the national average, meaning couples have a honeymoon phase of 2.1 years.

People in New York tend to get married later than most of the country, at age 29. So maybe it's not surprising that they have kids sooner into the marriage, on average at age 31, giving couples two years exactly of child free time together.

People in New Hampshire don't get rushed into either getting married or having kids. On average, couples are 27.2 when they wed and 30.7 when they become parents. So their honeymoon phase lasts an average of 3.5 years.

In Minnesota, people are an average of 26.7 when they get married and wait until they're an average of 30.2 to have their first child, giving themselves a nice 3.5 years of "just us" time.

Couples in Washington get married at an average age of 26.2, which is about the national average; however, they wait almost an extra year to have kids. Their average age when their first child is born 29.9, and their honeymoon phase 3.7 years.

People in Idaho get married unusually young, at an average age of 24.4, but that doesn't mean they rush into becoming parents. Idahoans' average age at the birth of their first child is 28.2, meaning they give themselves 3.8 years to just be married and on their own.

Since the Mormon church really stresses that whole "no sex before marriage" thing, maybe it's not so surprising that people in Utah get married youngest out of any state in the country — age 23.7 on average. But that doesn't mean they start having babies right away. People in Utah are an average age of 28.4 at the birth of their first child, meaning married couples give themselves a nice 4.7 year honeymoon phase.

You can find out more info about the other 40 states here.