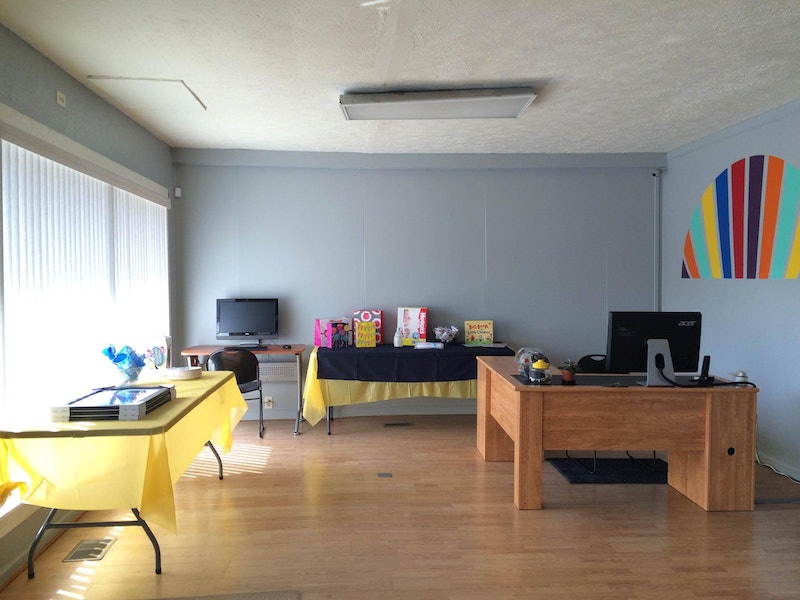 When you hear the words "crisis pregnancy center," the first image that comes to mind may be an unassuming storefront advertising free pregnancy testing, ultrasounds, and vague "alternatives" couched in life-affirming slogans. Once inside, as a recent NARAL investigation showed, CPCs may mislead pregnant women by providing inaccurate medical information or counseling with heavily religious overtones — or by not offering pregnant patients with very many options. But All-Options Pregnancy Resource Center, a new facility for people in Bloomington, Indiana, faced with unintended pregnancies, truly places an emphasis on the all, including information about the procedure CPCs leave out: abortion.

All-Options is an expansion project of sorts from Backline, a network that provides counseling and resources for people who are pregnant, parenting, or have chosen abortion or adoption. The organization has hosted a toll-free hotline, Talkline, for the last 10 years, taking calls from women who have questions about adoption, abortion, and parenting, or need support after enduring a pregnancy loss or giving up a child for adoption.

"Our only job is to support the person who’s looking for help, then help them figure out what’s going to work for them and what they need," Backline Executive Director Parker Dockray tells Bustle in an interview. "Sometimes, that’s more than one thing."One decade, thousands of calls and $25,000 in donations later, Backline opened its first brick-and-mortar location on May 2. Now, the leaders of the center want to combat the stigma surrounding both crisis pregnancy centers and abortion. That means not only providing the typical goods of diapers, food, and baby clothes to new or expectant mothers, but also referring women to adoption agencies, parenting classes, medical providers, and abortion clinics. The pregnancy resource center has even establishing its own abortion fund for people who cannot afford the procedure or travel costs — a much-needed service, considering Indiana bars Medicaid and state-exchange insurance funding for abortion, causing women to pay the full price of the procedure out-of-pocket. It will be the only abortion fund in the state of Indiana."We know that Indiana, like many states, doesn't have many resources for people who are parenting or people who are seeking information about abortion," Dockray tells Bustle. "People in really every state have been saying how they have a need for this, and the excitement for the new approach to supporting pregnant people."

Not Your Typical CPC

It might sound strange that Dockray and her colleagues are billing All-Options as the first crisis pregnancy center to provide abortion referrals and funding 42 years after Roe v. Wade, but there's a reason why it took 42 years for a center like All-Options to emerge on the pregnancy counseling scene. Crisis pregnancy centers rose in direct opposition of abortion clinics, with the first CPC founded by anti-abortion advocate Robert Pearson in 1967, according to the National Abortion Federation. Around that time, Toronto received its first CPC, which later evolved into Birthright International, one of the three largest networks operating pregnancy resource centers in North America.

While many CPCs don't always make their stance on abortion and parenting obvious in their advertising, the wording is often suspect. Birthright, for instance, uses the tagline: "We love them both" — presumably mother and child.

Meanwhile, Care Net, which touts itself as the largest network of CPCs in the United States, is not shy about its firm anti-abortion stance. The organization's mission statement says it strives to provide "Christ-centered support" for women who are considering abortion, because "every human life begins at conception and is worthy of protection."

"There’s a lot of faith-based organizations, including many crisis pregnancy centers, that come from a religious perspective where they don’t refer for birth control or abortion because of their religious beliefs," Dockray tells Bustle. For pregnant women who are uncertain about their future, an organization with such a hardline viewpoint may be a turn off before they even enter the building — even if some of these women do want to carry their pregnancies to term.

"We know that most Planned Parenthoods do provide all-options counseling, and actually, not all religiously run CPCs [offer] completely biased counseling. There’s good and bad counseling in different places, but it matters more what people think," Dockray says. "People may want to talk about something, and they want to talk about it with somebody [who] they don’t feel like is invested in that outcome. Or, they want to go to that kind of center [a CPC] but they also want information about abortion, and they can’t get it there."

Changing The Conversation Around Adoption

Angelique Saavedra, an All-Options volunteer, had no idea Backline or its hotline existed when she experienced an unintended pregnancy six years ago. At the time, she had health insurance through the state of California, which only covered pregnancy expenses, and little to no access to unbiased counseling.

Most of Saavedra's information came only from an adoption agency, while Internet searches gave her page after page of CPCs and religiously affiliated organizations. "I struggled to find support both during the process of adoption and after," she tells Bustle in an interview.

It wasn't until she discovered Backline a few years after she had placed her daughter for adoption that Saavedra felt like she could find some emotional closure. "It was the first time someone listened to me and normalized and validated what I was going through," Saavedra says of the Talkline hotline.

Although the anti-abortion movement is zealous when it comes to adoption, often pushing for it in its political debates and protest literature, women who actually choose can feel like they're lumped to the side. "Adoption doesn't have a really pretty history, so a lot of people have emotions around it, but it’s still not as noticeable or in the spotlight as abortion is right now," Saavedra tells Bustle.

Dockray agreed that calling abortion the "most visible” reproductive rights issue, but not the only reproductive choice that comes with a lingering stigma. "We really believe that part of changing the stigma around any of these experiences is about moving them all together and recognizing that they’re not separated," she explains to Bustle. "[We're] making it OK for people to bring ... all of their experiences into the conversation and the same space."

In doing so, it may also stop the anti-abortion movement from using adoption as a political talking point or bargaining chip — a tactic that has left people with similar experiences to Saavedra without many resources.

"In this pro-choice, anti-choice debate, we've given adoption over to the anti-abortion folks," Dockray says. "It’s not either/or, it’s not adoption versus abortion. There’s a stereotype that people who choose adoption would never have an abortion, and that’s just not what we see in reality."

"Empowered & Supported In Whatever They Want To Do"

When a woman facing an unintended pregnancy walks into the All-Options center in Bloomington, she can expect to find what she's looking for — even if she doesn't know it yet. Dockray called the center's support "open-hearted and open-minded," and much like the Talkline hotline, there will be trained advocates who are experts in abortion, adoption, parenting, or pregnancy loss. Many of these advocates, like volunteer Angelique Saavedra, may have gone through the experience themselves.

It's important to note that All-Options is not a clinic, so it won't employ any doctors or nurses on staff. The center will offer free pregnancy tests, which people can take home or at the center, but will refer patients to nearby medical providers for prenatal or abortion services.

But what All-Options can provide, exclusively, is perhaps the first place for some women to talk openly about their abortion, their miscarriage or adoption. "It’s secular, it’s confidential, it’s free. There’s no strings or expectations," Dockray tells Bustle. "Some people have called us saying, ‘I just had a miscarriage and I want to talk about but I had an abortion two years ago and I can’t talk to anyone about that.'"

And of course, it'll be, so far, the only crisis pregnancy center in America where a woman can get an abortion referral and diapers for their child. "That was our inspiration for doing the center," Dockray says. "Those are not two separate needs; these are the same people."