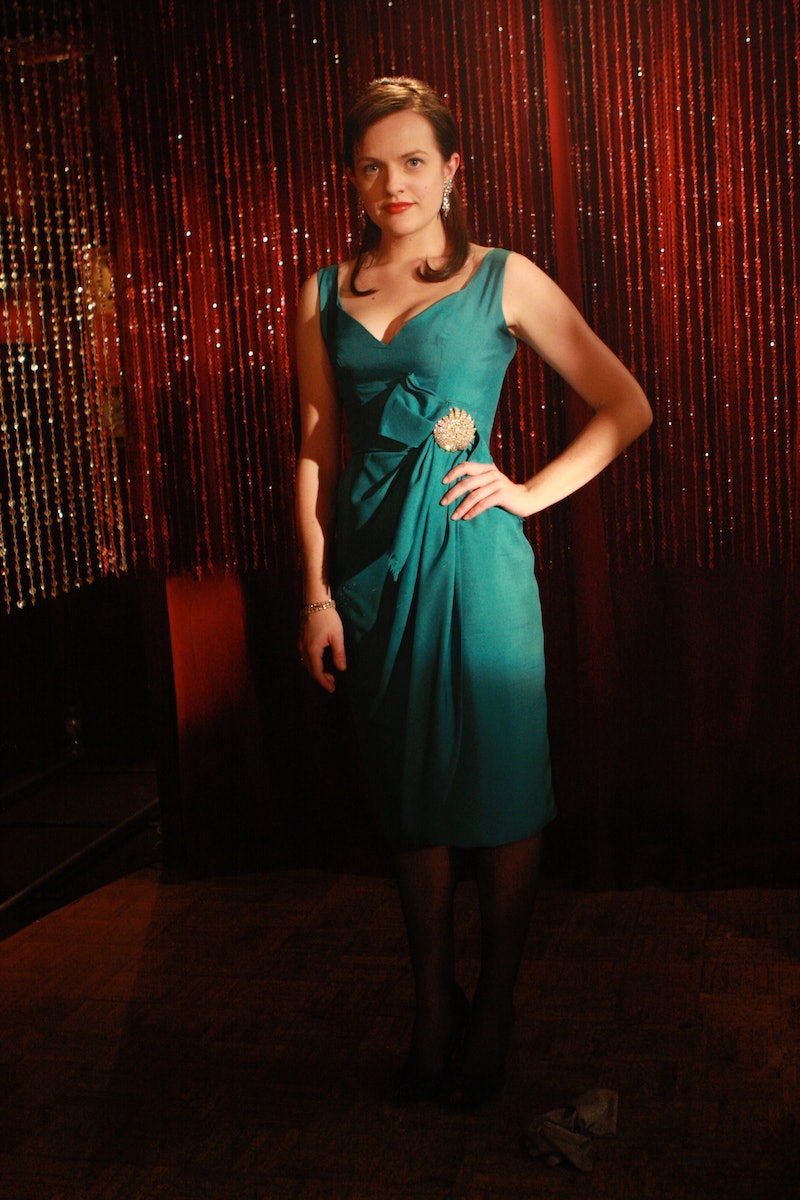 In honor of the final season of Mad Men, it's good to revisit old episodes and look back at what made these characters who they are now before we say goodbye. In a recent Q&A, creator Matthew Weiner cited "Maidenform" as his favorite Mad Men episode. Obviously, I needed to revisit this one! It's in the middle of Season 2, takes place over Memorial Day weekend, and hosts a handful of iconic Mad Men moments that are still relevant in the final episodes of Season 7.

In the episode, Peggy adjusts to her new job as copyeditor in a figurative and then literal boy's club. Duck Phillips' ex-wife dumps him with his dog, Chauncey. Pete is dealing with his father's death in all the wrong ways. Sally harshed her mother's vibe for once and Don Draper has a moment of doubt when he discovers that his goings on about town have earned him a bit of a reputation as a lothario. There are a lot of mirrors in the episode, and no bit of dialogue is extraneous. Everything relates back to the theme.

My favorite moment of the episode was Pete Campbell walking up to Chauncey and, with no humans around to hear him, saying "Hello dog. You look lost." Second place goes to Betty for the line "as we used to say in college, 'let's be friends'" — Betty, what? Here are some other things I noticed upon re-watching "Maidenform."

Are You A Marilyn Or A Jackie?

The theme revolves around the advertising campaign they're working on for Playtex to compete with Maidenform. The concept they come up with is that every woman is either a "Marilyn Monroe" or a "Jackie Kennedy," which Paul Kinsey (remember him) tests in the office. However, the ad uses the same model to portray each fantasy — one in black and one in white.

I forgot how small Peggy Olsen's voice used to be. The copyeditor goes to Joan for advice on how the office "works" and how to navigate working with men who are leaving her out of their meetings and after-work outings at bars. Joan tells Peggy that if "You want to be taken seriously? Stop dressing like a little girl." Peggy takes initiative, ditches the pony-tail and meets the boys at a strip club. That's one way to combat workplace sexism!

Isn't it interesting that this is still a point of contention in the office? The situation has almost reversed itself. In the midseason premiere, it was Peggy who criticized what Joan was wearing.

Pete's Affections Were All Over The Place

I had completely forgotten how intense Pete's crush on Peggy used to be. I don't know if this is nostalgia at play or what, but his attempt at flirting was kind of cute? Am I a Peggy/Pete shipper now? What is happening to me?

Pete later has an affair with a model, played by Millicent Gergich from Parks & Recreation! The whole thing is an awkward mess, yet Pete still feels like a Marilyn when it's over and grins at himself in the mirror.

This wasn't the last time we saw Don Draper get dominant in the bedroom. However, the scene ends badly for Don when he learns that women gossip about him. He thought he was a Jackie and he is a Marilyn. Matthew Weiner cited this scene in an interview with Elvis Mitchell for the KCRW radio show "The Treatment."

There's a moment in that with Bobbie Barrett where [Don Draper] has met her for an assignation and ... what it is, is her saying "I wanted the Don Draper treatment" and this thing comes out that he has a reputation. How could he not? And it's almost like, I mean this is of the period — "reputation" being completely reserved for women. But also the idea that this guy has no idea that his libido, his id if you will, is exposed. And he's very shy about that. He's embarrassed about it. He has his appetites and he can't seem to control them. But to me it's been consistent from the beginning of the show that it's a life wish and a death wish.

Earlier in the episode, Don shamed Betty for wanting to go out in a flashy bikini. It's a good thing that his double standard came back to bite him!

The Campbells Should Have Never Moved

Pete referred to their East 83rd street Manhattan apartment as a "ghost town."

Sally watches Don shave and says "I'm not going to talk" because she doesn't want to distract him. This reminds Don of how he left his rendez-vous by saying to Bobbie "I told you not to talk" and he freaks out. This is especially sad considering their strained relationship in Season 7, now that Sally knows her father's reputation. The final shot of the episode shows Don reflected in the bathroom door, mirroring (pun intended) the Playtex ad.