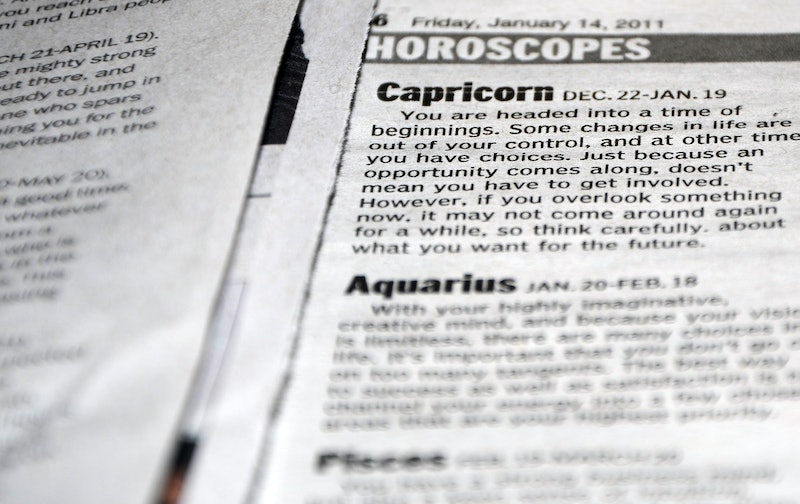 Have you ever wished you could just figure someone out without having to go through all that pesky getting-to-know-you stuff? Have you ever wondered what someone's birthday says about them, beyond just horoscope stuff (because duh, you've already looked that up). Do you wish there was an Internet generator that could do all this research for you? If so, you need to get yourself over to The Secret Language of Birthday's website, stat, because your troubles are over. The Secret Language of Birthdays is part of a series of books by Gary Goldschneider, who used "astrology, numerology, and pure psychic intuition" to create a "unique compilation" of advice, life guidance, and personality insights. All you need to "better understand any person," including yourself, is that person's birthday, and boom! You get a lengthy essay describing them, up to and including health predictions, meditation advice, and personality traits. It's super scientific, too — the website claims its information is the result of a "40-year empirical study of the life stories of more than 20,000 people." Presumably this is in addition to the aforementioned pure psychic intuition, but I don't pretend to know Goldschneider's methods and he doesn't seem inclined to share them. Pesky things like the scientific method have no place in the Secret Language's world. The results are the important part, and I went to the trouble of testing them out for you. First up was myself, because duh.

As mentioned above, all you have to do is enter the desired person's birthday. After a few false starts, because apparently putting in the correct year is important, the Secret Language finally declared me an Expressed Airborne Dreamer. Do I have any idea what that means? Hell no. But it's like someone took everything my nine-year-old self was desperate to be (ethereal, mysterious, and possibly a fairy) combined it into a single, enigmatic title.

The generator went on to say that we Expressed Airbone Dreamers are "seekers of truth" who "deflate phoniness of any sort," which is now going in my Twitter bio. We're "extremely lively" and present a "childlike demeanor to the world," but apparently we're also great at making money. I have my doubts on that last one, but maybe that comes with time. To cap it all off, the website says I'm born on the same day as Gary Busey. It's everything I've ever wanted.

Next up was my sister, because obviously I had to make sure her reading isn't as cool as mine.

Thankfully, mine remained way more fun-sounding. Traits of my sister's birthday include "duality in being both forceful individuals on the one hand and curiously passive on the other," being "rock solid to a fault," and "facile minds [with] a logical orientation."

Lastly, the website even has an option for readings on a relationship between two people, and if you think I didn't jump on the chance to see what they had to say about my last relationship, your estimation of me is way too high.

My God, it makes it sound like we're one of those tragic Nicholas Sparks couples, but it's so vaguely worded that there's no refuting it. This website understands me.

Don't try to tell me this isn't the real deal. What's next, claiming that Cosmo's horoscopes aren't words to live by? If you want to give it a whirl, head over to the Secret Language website.