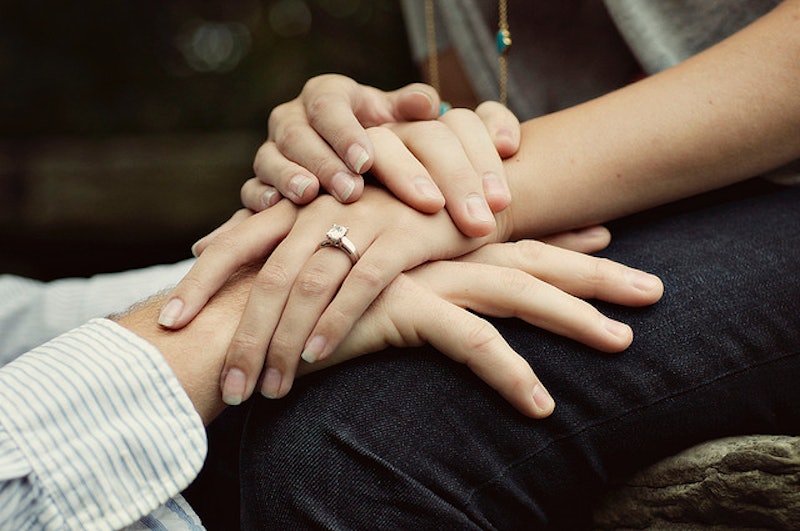 Our cultural scripts for initiating a marital engagement are all too familiar for couples – the traditions are clear cut. The surprise lies in the timing – perhaps a planned romantic trip or an unexpected, spontaneous detour on an otherwise humdrum day. There's one topic that's too taboo for the all-romantic marriage proposal: the prenup. There is no knee-bending or jewelry involved when she or he wants a prenup. As it turns out, there is no culturally sanctioned script for asking your beloved to sign an agreement which spells out the terms of a divorce: possession of assets, property and the protection of present and future salaries.

In a strongly-worded op-ed for The New York Times, William Bradford Wilcox, director of the University of Virginia's National Marriage Project, claimed that prenups are antithetical to a happy marriage. "If you’re thinking about a prenup, or — worse yet — your intended is pushing a prenup on you, you might as well go ahead and just cancel the wedding... Marriage is about establishing a common life together, about putting someone else ahead of yourself, and sharing the things that mean the most to you, including your money... the kind of partners who wish to hold something back from their spouse in a marriage — emotionally, practically and financially — and to look out for No. 1 instead are more likely to end up unhappy and divorced." claims Wilcox.

But is this true? I decided to speak with someone who signed a prenup — as it turns out, I didn't have to go very far. Last month, I attended a five-year vow renewal for two friends: Jillian, 28, and her husband Justin, 29. Back in 2010, a few days before they married in a small ceremony, the two discussed the terms for a prenup and signed an agreement.

How does it come up?

The topic of a prenup after the couple moved in together and began merging possessions. Their decision was mutual and neither Jillian nor Justin can remember who first broached the topic. The two became engaged at 18, moved in together following Jillian's graduation from college and married when Jillian was 23.

"I didn't necessarily hear about prenups growing up, but I'd heard it mentioned -- it was always kind of in the back of my head, 'a woman protects herself' kind of thing," says Jillian. "It's like having an emergency fund. It's like having what my mom called 'mad money,' -- if you left a date, you always had money for a cab if you got mad at your date. [Justin] and I barely had two nickels to rub together anyway, but I definitely wanted to make sure -- even if we couldn't get a lawyer -- that we had put something down on paper."

"The gist was if we were to ever divorce or split up, we leave with what we came in with— anything else would get split evenly. Same with kids — we would decide custody if that were ever to be an issue, just trying to make everything as fair and equitable as possible. If memory serves, my mother witnessed it and the signing took place a night or two before we got married. It was very unofficial, but we at least put our intentions down on paper."

At any point, did she ever feel pressured to sign the agreement? "When we first got together, Justin's parents mentioned that they were worried I was going to steal all his money. I remember heartily guffawing at that— because he didn't have any! So no, I never felt any pressure at all. Like I said, if he's leaving me, he's not taking my books," she says. "I will fight him for my signed copy of White Oleander."

Does it mean the marriage is doomed?

When I asked about her feelings on prenups and whether they spell out an unhappy marriage, as Wilcox claimed in the article cited above, Jillian seemed to feel that it was a good decision for her and her husband. "It doesn't have to be anything notarized, but if you had any assets or an inheritance, you would want that protected. This was a smart thing to do, you know, to protect ourselves."

It's clear that their views of marriage are both deeply loving and still pragmatic. "We love each other, but who the hell knows -— there are eight divorces between our parents," she says. "We're not stupid... I'm sure it's very unsexy, but it's the same kind of unsexy stuff you talk about in premarital counseling: how are we going to combine our finances? Are we going to take a vacation every year? Yes, love is wonderful, but every day life has got to happen in the meantime. You've got to make time for those conversations because God forbid you get married and realize, 'We never had that conversation — and it's a big ticket issue.'"