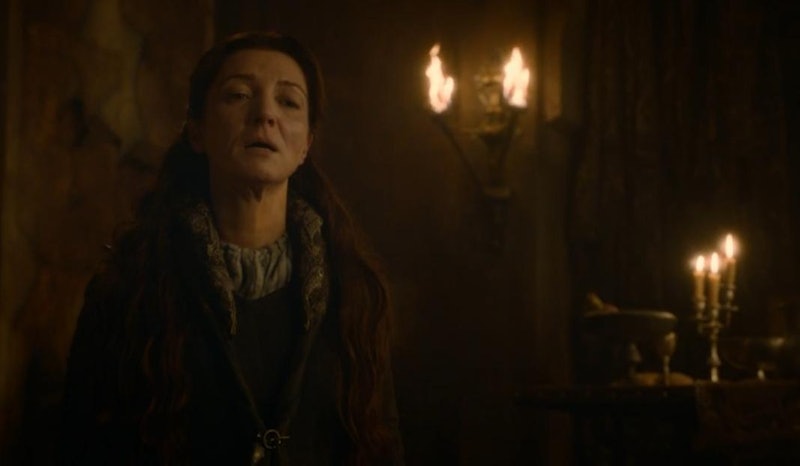 Game of Thrones doesn’t often go easy on its viewers. After all, it has spent an exorbitantly large chunk of the season torturing us with the all-too-frequent interludes in Theon Greyjoy’s little slice of hell, complete with a sadistic torture master, naked ladies, and a knife that was forged for the specific purpose of robbing one of his little finger. But when Robb Stark, his wife, mother, uncle, and army hike to The Twins for the consolation prize marriage of Uncle Edmure to Lord Walder Frey’s daughter — the one Robb was supposed to marry before he went rogue and wed the beautiful Talisa — things turn bloody and the death toll stretches high and wide. “The Rains of Castamere” robs us of not only a little sleep, but three major characters, one sweet direwolf, and (so it seems) all hope.

In the aftermath of Edmure’s wedding to Frey’s prettiest young daughter, the “happy” couple is carried off in the appallingly ancient tradition of “bedding ceremony” that Tyrion so graciously saved young Sansa from last week. Still, for our Stark family heroes, nothing seems that out of the ordinary — even if Talisa’s face is covered with shock and disapproval. It’s when the wedding band begins to play the Lannister theme song, “The Rains of Castamere,” that Catelyn Stark’s countenance changes for the worse: Tywin’s steady hand has finally found them just as Robb was planning a siege on the Lannister home of Casterly Rock.

There's not even enough time to justify calling it a "moment" before Frey gives the order and his men slay Robb’s army, Robb, and his direwolf (unbearable dying pup noises to boot), but Robb survives long enough to witness one thug stabbing Talisa repeatedly in her stomach, ripping away his love and his future son in one fell swoop. As he staggers to his dead wife’s body, Catelyn threatens to kill Frey’s wife unless he sets Robb free. Frey cackles — he has no affinity for this wife person and he’ll just grab a new one in the morning. Roose Bolton, who’s been secretly plotting with House Frey to execute the Lannisters’ cruel plan, stabs Robb in the heart with a quick message: “The Lannisters send their regards.”

And if this heart-wrenchingly violent scene wasn’t enough to drive us to tears, we’re with Arya Stark outside as she witnesses her brother’s men being slaughtered and the hope systematically drains from her face. Just as the Hound had said, it’s dangerous getting so close to what you want because it’s that much more likely it’s all about to slip away. The weight of that notion is crushing Arya when the Hound knocks her out and rescues her from the fray, and believe it or not, that instance is one of the bright spots in what might be the most deadly, dismal episode of the series.

Still, it seems impossible that we might move on from this spot — it seemed impossible to move from our couches and recliners as the silent credits rolled after blood poured from Catelyn’s severed neck — but while the tortured Starks’ hope of getting revenge on the Lannisters was just eviscerated, all is not lost. The Starks will never avenge the death of Ned Stark, and their chances of grabbing the Iron Throne just become nil, but things aren’t as dark as Tywin Lannister's black heart:

1. Arya, while crushed, is about to grow stronger: Everyone’s favorite scrappy Stark refugee has been marked since she was the brave little soul still trying to save her father from his execution. We knew Arya was going to be a feisty little fighter, and every tragedy she suffers only gives her more fuel for that fire, which, in turn, is great fuel for Game of Thrones’ fire, too.

2. We’ve still got Jon Snow: And like his half-brother Robb, Jon sticks to his convictions like Melisandre’s leeches on a Baratheon bastard. (You thought we were going to say he’s handsome like Robb, didn’t you? Well, to be honest, there’s that too.) Jon’s arc is clearly just starting to ramp up after escaping the Wildling fray and an eagle hell-bent on pecking out his pretty eyes, and (perhaps accidentally) leaving his strong-willed lover Ygritte behind.

3. Now we can shamelessly root for the Mother of Dragons: Those familiar with the books know that Daeneyrs is eons away from approaching King’s Landing with her fire-breathing pets of mayhem, but something about knocking our beloved Starks out of the running for the Iron Throne brings the Khaleesi’s end game into stark (sorry) and fantastic relief. It’s starting to feel like her goal, which was hopeless only a season ago, is attainable — especially now that she’s got her unstoppable army with man-candy commanders at the helm.

Now, these bullet points can’t take away the pain of watching the life drain from Robb’s sparkling eyes, or the pain of watching Arya realize the life she’d held in an idealistic orb at the back on her mind has just gone forever, it’s all the consolation we’ve got. Keep in mind, that even stalwart fans of the books had trouble returning to the series after this loss. Grieving these characters is natural and important. But come next Sunday, it’s time to ride one last time for the Season 3 finale, and these bullet points may be our only armor.