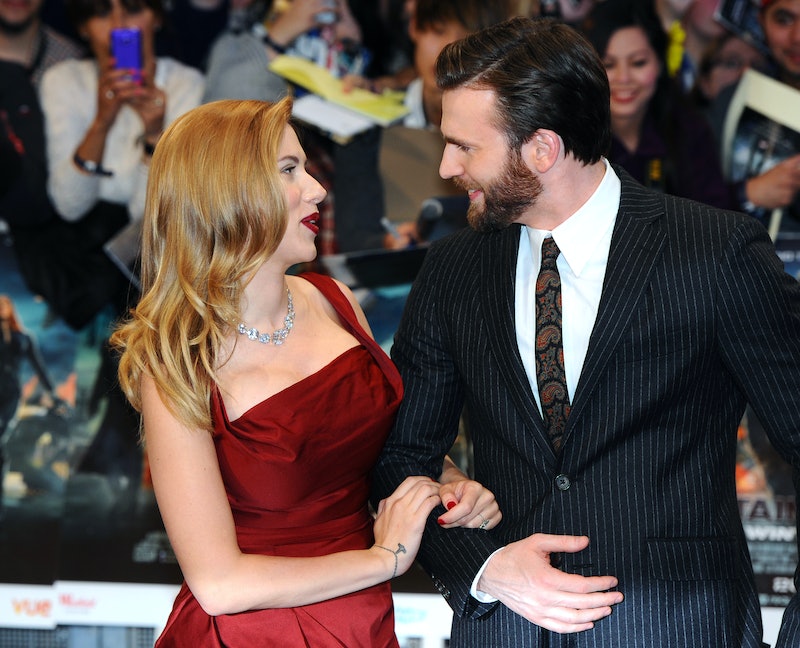 The goofy Avengers cast is here to make your day better, yet again. Even though the whole crew wasn't together this time, Chris Evans scaring Scarlett Johansson on The Ellen DeGeneres Show was so epic that Captain America made up for his fellow superheroes' absences. Before he popped out to surprise his co-star, Johansson was actually playfully making fun of the men in the franchise and talking about how long she's known Evans for.

When DeGeneres asked Johansson if it's "fun" being the only woman in the film, she embraced the uneven male to female ratio with a laugh. "Yeah, we have a lot of guys. Now we have Lizzie [Elizabeth Olsen] and Cobie [Smulders] both in it, which is helpful. I surround myself with like an army of women to protect myself against all the testosterone," she joked. "And you know, we're talking about actors — they're very delicate ... like [Chris] Hemsworth's hair takes longer than mine." Touché, Scarlett. Touché.

Then, on cue, DeGeneres mentioned Evans, and just as Johansson talked about how they've worked together since they were 17 — in the highly underrated movie The Perfect Score — Evans creeped up behind her for a scare. Her reaction is absolutely priceless and 100 percent terrified. "It was his idea!" DeGeneres was sure to point out, officially throwing Captain America under the bus. Watch the hilarious clip below.