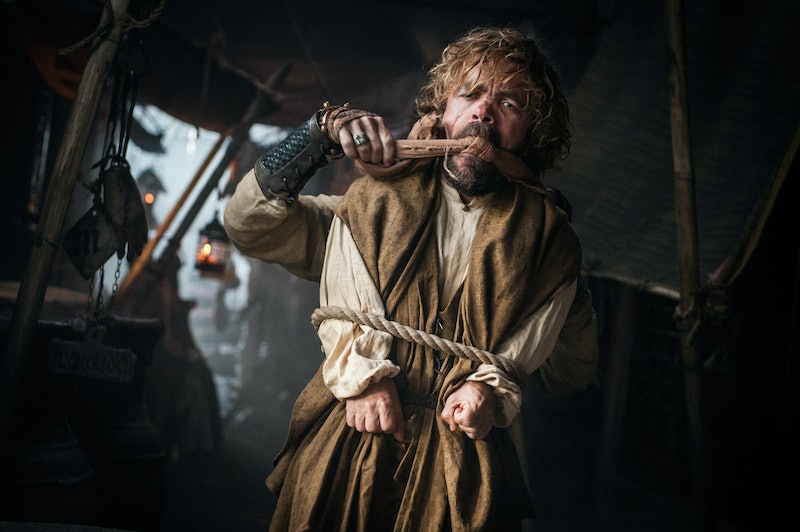 Each season on Game of Thrones seems to present us with new sets of characters on an epic road trip. We've had Arya and the Hound, Jaime and Brienne — what's next? Last Sunday's episode ended in a cliffhanger when Jorah Mormont kidnapped Tyrion Lannister on Game of Thrones and promised to take her to "the Queen." If they follow the books, it's pretty much the plot of your favorite road trip/buddy comedy movie. The two are both outlaws. They're basically Thelma & Louise.

Kidnapping is exactly what Varys warned Tyrion about. The Queen Mother, Cersei Lannister, has put a price on his head and doesn't care how many dwarves die in the process. Not to blame the victim, but Tyrion was not doing himself any favors by walking into a brothel (the one place you'd expect Tyrion to be) and boasting about how he "always pays his debts" (the Lannister trademark). Perhaps he has a bit of a death wish.

The way Jorah Mormont usually moons over his Khaleesi, it seems obvious that Danaerys is the "Queen" that he's taking Tyrion Lannister to instead. Still, if I didn't know that was his intention from the book, I might be worried. Don't forget why Jorah was with the Targaryens in the first place. He was banished from Westeros for selling slaves and the pardon granted to him by Robert Baratheon might no longer be valid. Delivering Tywin's murderer to Cersei is Jorah's ticket home, if Bear Island is where he wants to go. I wouldn't blame him, his ten-year-old niece and Robb Stark fangirl Lyanna Mormont is pretty cool!

Still, I think it's safe to say that Jorah and Tyrion are both off to see Khaleesi together. What sort of trouble will they get into if they follow George R. R. Martin's path? Here are some famous movies whose tropes will prepare you for what could come next. Not only are there major book spoilers ahead, but it is Game of Thrones so it's gonna get dark.

It Happened One Night

Jorah is taking Tyrion to Daenerys for a reward, just like Peter wants a reward for returning Ellie, a high born socialite, back to her fiancé in the screwball comedy that defines a road trip flick.

In the books, the two of them get picked up by slavers and travel with their company for a while. Tyrion, Jorah, and a female dwarf named Penny put on a show to stay alive. Road trip comedies don't usually get this dark, but it kind of reminds me of Almost Famous. William's mother does think that her son was "kidnapped by rock stars" and Kate Hudson's character is named Penny!

Before he meets up with Jorah, Tyrion is on a boat that gets ambushed by Stone Men.

Just like Lloyd in the comedy, Jorah has got it bad for Dany. Tyrion, however, is no dummy, and figures this out pretty quickly. He's also trying to get over Shae, so this will be a lot of mopey fun for certain.

This is the biggest book spoiler of all! Look away! Look away! On his journey, Tyrion encounters a character named Young Griff, who claims to be Aegon Targaryen, the son of Rhaegar Targaryen and Elia Martell, who was allegedly killed by The Mountain, Gregor Clegane. He would be Daenerys' nephew and, thanks to sexist succession laws, the true heir to the Iron Throne if this really is true.