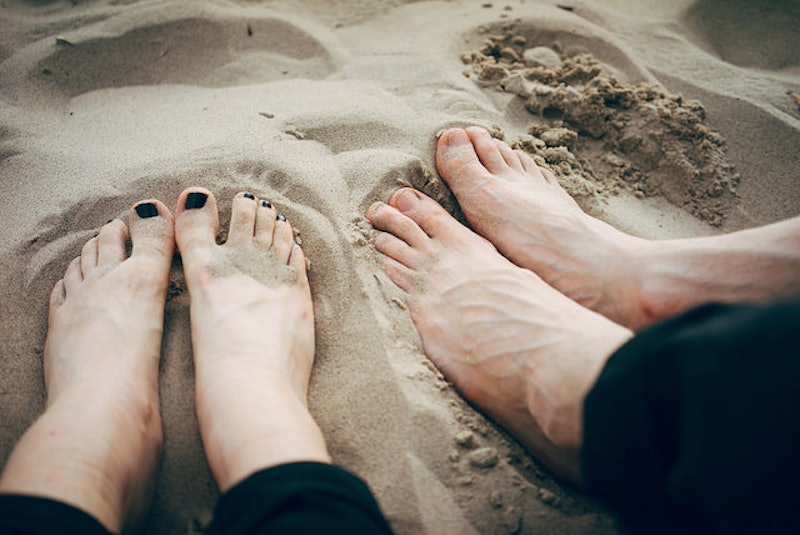 There's so much talk about "relationship goals" lately. Sickeningly sweet images of hands held, cheeks kissed and crowbarred-in backgrounds of romantic locales are spreading across our social media like wildfire. It's an epidemic, to be sure. But it's what we want. People love the idea of exploring, experiencing and sharing life with someone that they care for. Who could blame them? It seems an inherent human desire to search for and discover someone we love (or like, or tolerate) so much that we want to see the world with them. As we perceive it from the outsider's perspective, it's all exotic cultures and foreign rituals, blending in with the people and blending back out again to bang in tents and teepees and hostels. These portrayals of traveling with a significant other, though, are not always the most realistic illustrations of how it all works out. Sometimes it's really stressful. It tests you both. As in, you don't speak the language, you just missed your speed train, it's pouring buckets of acid rain and you've got about $50 left in your collective wallet.

These are the times that matter. It's when you truly experience, for perhaps the first time, the raw, real parts of people that can so easily be held back in everyday life. It's when you see something macabre and violent and dirty and know that it has irrevocably changed you both. In the moments at the hostel, in the alley, in the bar when you have to make the split-second decisions that could change your future. When you've been walking for four hours and collapse on the beach respectively, lay there for another hour watching the sun go down without saying a word.

You see for the first time how you work as a team, where that person's priorities truly lie (are they focused on fixing the problem to create a better situation for both of you, or are they focused on bitching about the problem because they don't know how to handle it?) Most importantly, you learn if you're on the same page regarding the most vital aspects of life: are they right there with you in the fray, exploring and thriving and desperate for the newness and knowledge that comes with a new place? Can you look at each other after a day of absolute, beautiful, dirty ridiculousness and just know that this is the best it could ever, ever be?

I see that it's hard. We're all wrapped up in our 9-5s, our iPhones, iPads, coffees and bills. But that's not living. It's existing.

Living is having your breath taken away against your will, whether by view, experience or the very person you're with. It's not really knowing exactly what's going to happen next, but feeling that that's OK because the unsureness and the fright and the concern is all melted away when you're together.

I don't believe that there is a single "one" for each person. I think we have a few. I also think that most people don't ever truly find even one of their "ones." But I think that if there was ever a way to know, it lies somewhere on that map you haven't pulled out recently.