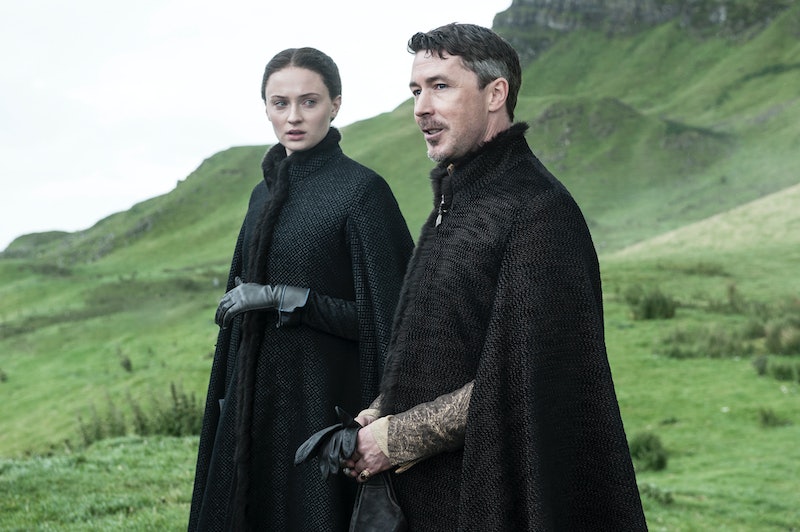 It turns out all of the predictions were true: Sansa Stark is officially betrothed to Westeros' psychotic masochist in residence, Ramsay Bolton. With this Sansa/Ramsay storyline, we're in completely uncharted territory (at this point, the TV show has fully diverged from the books) — so what could D. B. Weiss and David Benioff possibly have in store for her? What is Sansa's endgame? And perhaps most importantly of all, will she make it to the end of the series?

Many are worried (and rightly so) about the latest development in the Sansa storyline, because, let's face it, her marriage to Ramsay is doomed at best — after all, his favorite activities include flaying people, castrating people, and straight-up murdering people. Add all that to the fact that he doesn't exactly have a great track record with women (yeah, remember that time he went after a girl with a pack of dogs and a bow and arrow?), and the fact that Iwan Rheon admitted on a morning show that "There were some things in this series that I was really disturbed by" — and you've definitely got yourself some cause for concern where their betrothal is involved.

Even though Ramsay's promise never to hurt Sansa set off BS alerts the world over, I still think Sansa will come out of this whole mess closer to the Iron Throne. Sure, Ramsay's horrible, but so was Joffrey — and let's all remember that Sansa knows how to take care of herself. She may have come into her own as Dark Sansa, taking names, and tearing down the likes of Brienne of Tarth (poor Brienne!) — but she can still play the consummate lady when she needs to. Did you happen to catch the way she smiled and curtsied at the man who brutally murdered her mother and brother? Sansa's still got it. Plus, she's also got some people looking out from her — because as an older maid at Moat Cailin told her, "The North remembers." As far as the Northerners know, she's the last surviving (legitimate) Stark, and you can bet that they'll go way out of their way to keep her alive.

Interestingly enough, going off of George R. R. Martin's very early outline of A Song of Ice and Fire , Sansa was not one of the chosen few to make it through to the end of the series — nope, only Arya and Bran Stark, Jon Snow, Daenerys Targaryen, and Tyrion Lannister were supposed to prevail. Those five might still end up making it to the end, but I'd put money on the fact that GRRM may have added Sansa to the updated version of that little list. After all, a lot has changed since he made that outline — apparently, Sansa was originally going to marry Joffrey and bear his children, and get this — Arya and Jon were supposed to have a guilt-infested incestuous affair (and if that's not creepy enough for you, Tyrion was slated to fall for the seriously underage girl as well). Yep, things have definitely changed in the twenty-odd years since GRRM first wrote that outline, and let's hope Sansa's survival is one of them.

Though even if she doesn't make it all the way to the end, Sansa's certainly in it for the long haul, and it's unlikely that she'll let anything or anyone — even a truly terrible piece of work like Ramsay Bolton — stand in her way. Talk of a controversial Sansa chapter in the upcoming The Winds of Winter has some fans positing that Sansa may eventually kill Littlefinger, or maybe even her creepy little cousin, Robin (which could also be an indirect means of killing Littlefinger, as she would most likely do it to frame him for the murder). With two books and two seasons left to go, I'd actually be surprised if Sansa didn't murder someone — because girl is playing the titular game of thrones to win.