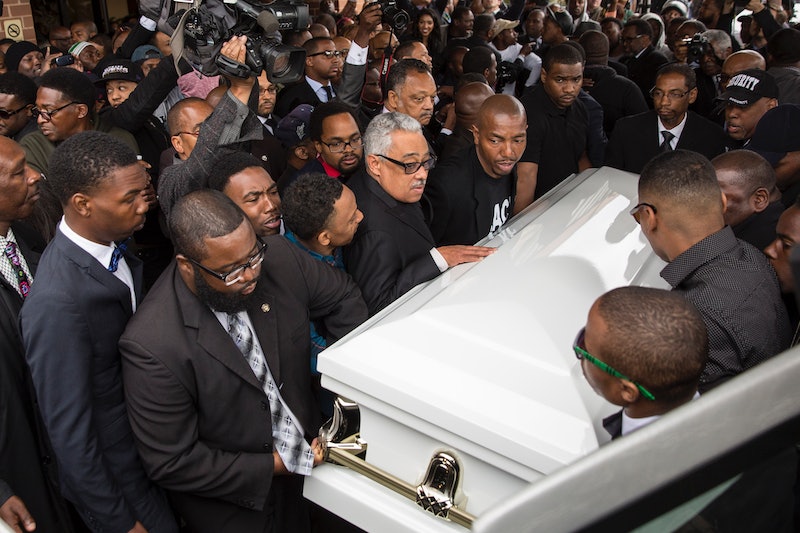 In a press conference Friday morning, Baltimore state's attorney Marilyn Mosby announced that the death of Freddie Gray has been ruled a homicide by the state's medical examiner, and that there is “probable cause to file criminal charges” against the cops whose custody Gray was in when he sustained spinal injuries that led to his death. She went on to formally announce the charges that will be brought against the six officers involved in Gray's death. These include manslaughter, assault, and second-degree murder.

"I've heard your calls for no justice, no peace," Mosby said. "Your peace is sorely needed as I work to deliver justice."

Mosby added that Gray's arrest by Baltimore Police Department officers was illegal — which is to say that Gray had committed no crime, and was arrested anyway. It remains unclear exactly what happened to lead to his death — it's thought an injury that was sustained by Gray when he wasn't wearing a seatbelt — but the fact that his death is a homicide means that, in the state's eyes, the officers are responsible. Mosby added that not only was Gray's arrest illegal, he was cuffed without being offered the use of a seatbelt. The officers, Mosby said, then failed to obtain him medical attention at all.

A warrant has been issued for the arrest of the six officers, who remain anonymous.

Gray's spine was severed under unclear circumstances while officers transported him to the police station. He died April 19 as a result of his injuries. “Mr. Gray was no longer breathing at all," Mosby said of Gray's condition when he left the police van.

More like this
Joe Lycett Just Took HIs David Beckham Qatar Protest To A Whole New Level
By Sophie McEvoy
Footballer Jake Daniels Shared His Thoughts On A World Cup Boycott
By Sam Ramsden
Iran Has Issued A Death Sentence Over Mahsa Amini Protests
By Catharina Cheung, Darshita Goyal and Maxine Harrison
Ghislaine Maxwell Is Serving Her 20-Year Prison Sentence In Florida
By Gretchen Smail and Brad Witter
Get Even More From Bustle — Sign Up For The Newsletter