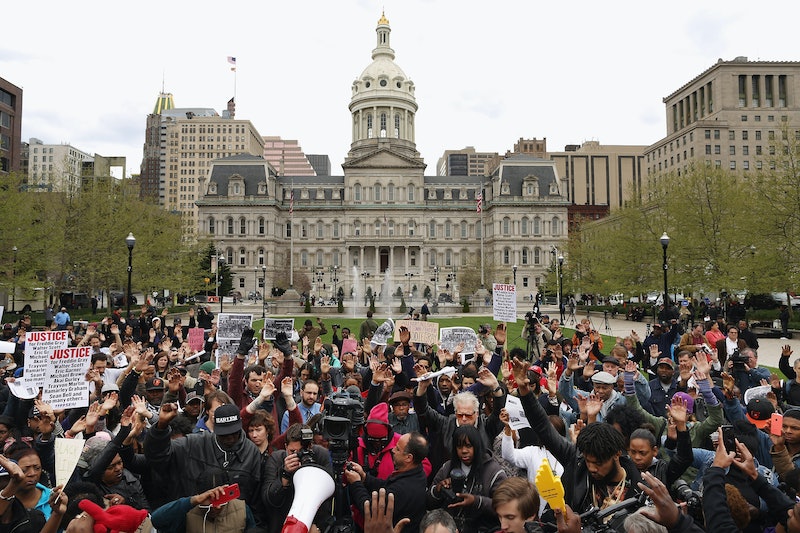 After over a week of turmoil, Baltimore state’s attorney Marilyn Mosby announced on Friday that six officers will be charged for their alleged involvement the death of Freddie Gray. In front of a crowd of press and on-lookers, Mosby announced that there is “probable cause to file criminal charges” against the police people who were allegedly involved in the arrest and transport of Gray in a police van on April 12. The 35-year-old prosecutor also revealed during the press conference that Gray had not committed a crime, claiming that the cops' arrest of Gray was illegal. So, who are the officers charged in Freddie Gray's case? There are six in total, and they face serious charges.

The charges for the officers' alleged involvement varies. Here's what the press release from the Office of the State's Attorney for Baltimore City discloses:

Officer Goodson, Jr. drove the van. As The Atlantic points out, "depraved heart murder" is defined as:

A wanton and willful killing. The term "depraved heart" means something more than conduct amounting to a high or unreasonable risk to human life. The perpetrator must realize the risk his behavior has created to the extent that his conduct may be termed willful. Moreover, the conduct must contain an element of viciousness or contemptuous disregard for the value of human life which conduct characterizes that behavior as wanton.

According to NBC News, Goodson, Jr. has been a member of the Baltimore police force for 16 years and is 45 years old. Porter is 25 years old, and has been a member of the force since 2012. Rice, 41, has been a member of Baltimore PD since 1997. White, 30, has been there for five years; Miller, 26, has been there since 2012, and Nero, 29, since 2012, as well. The Baltimore Sun reports that as of Friday morning, it is unclear where the six officers are. A spokesman for the department of Public Safety and Correctional Services said, "We're not sure what time they are coming in. They will go through the process like anyone else." UPDATE: As of Friday around 1 p.m. ET, The AP reports that according to the city's mayor, five of the six officers are now in custody.

Within 24 hours of their arrest, they will be charged downtown and their bail will be set. The Fraternal Order Of Police, the "world's largest organization of sworn law enforcement officers" that is "the voice of those who dedicate their lives to protecting and serving our communities," issued a statement in regard to the officers accused. In a letter to Mosby, Gene Ryan, president of FOP Lodge 3, wrote:

Now, that's left for the court to decide.