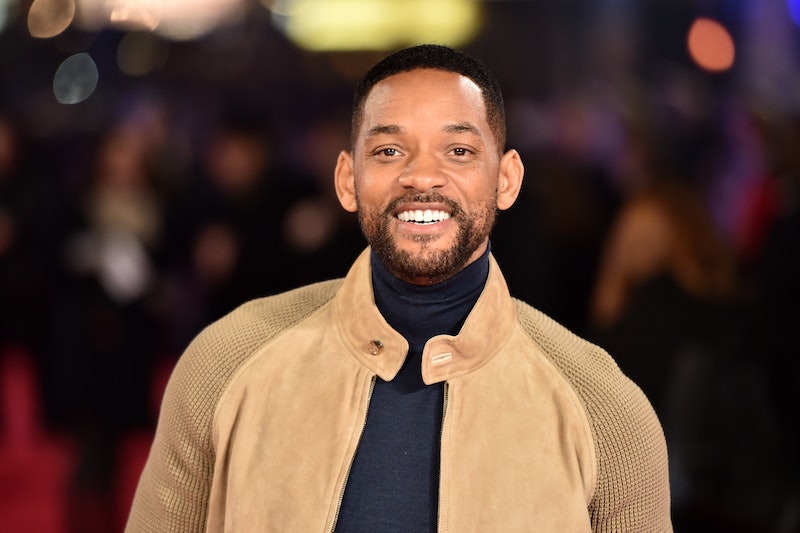 We've already seen what Jared Leto will look like as the Joker in Suicide Squad , and though opinions on that costume choice were mixed, the same cannot be said for Will Smith's apparent look as Deadshot in the film — in fact, its awesomeness is undeniable. Images of Smith as Floyd Lawton and as his villainous alter-ego Deadshot have surfaced, and both looks are pretty fantastic. Though it's unclear as of this moment if that is actually Deadshot, or a different costume on the set — these aren't official images, after all — if it is the costume that Suicide Squad is going with, it's a total winner.

Smith looks pretty perfect as Floyd Lawton, every bit the troubled and slightly creepy professional. For those unfamiliar with the comics, Deadshot is an assassin with a troubled family past. Deadshot is, as one might imagine, a gifted assassin, and one with very little regard for human life. In fact, one of Deadshot's most distinctive characteristics is his desire to die in spectacular fashion.

So, how do the costumes line up with those depicted in the comics? They don't appear to be as much of a departure as we saw wit hJared Leto's Joker — instead, if these photos are indeed of the Deadshot costume we'll see in the fulm, it appears to be fairly similar to the canon. However, one of the most notable features of Deadshot's look is the one red cybernetic eye, which appears to be either missing or obscured in the image. The eye is partly responsible for Deadshot's deadly accuracy.

Additionally, though you don't see Deadshot out of costume very often in the comics, Smith's cocky look definitely matches up with Floyd Lawton's character.

Another exciting result of these images: a possible Ben Affleck as Batman sighting. Since Batman is Deadshot's enemy, this seems likely, though his appearance in the movie is still unconfirmed. A man with Affleck's chin and pointy bat ears has been haunting the set, wearing a sheet — but it's not clear if it's actually Affleck, or a stand-in.