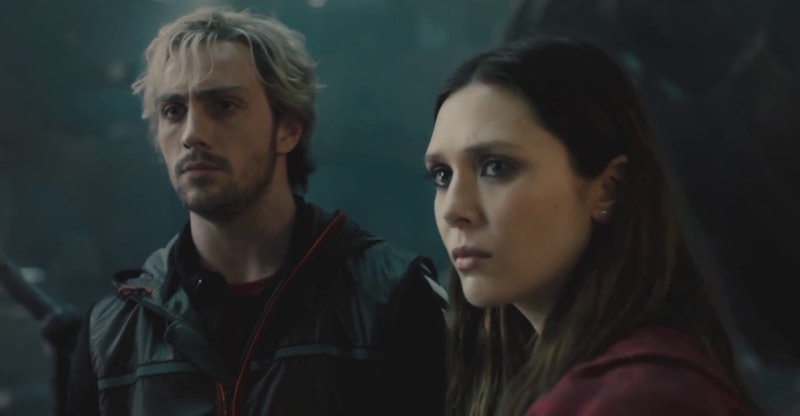 To say that the newest Marvel franchise film, Avengers: Age of Ultron (which hits theaters on May 1) is highly anticipated is basically an understatement. The film's release has been the source of a ton of fan excitement, particularly because of the bevy of new story lines it introduces — as well as the new characters. For instance, fans are understandably pretty excited about Elizabeth Olsen and Aaron Taylor-Johnson joining the film as Scarlet Witch and Quicksilver, aka, Wanda and Pietro Maximoff — and, as CinemaBlend points out, the characters were great additions to the story. But, as fans will notice in the film, their backstory is different to anything we've seen before, particularly in previous film iterations like X-Men: Days Of Future Past (which featured Evan Peters as Quicksilver). So, it's worth wondering: How did Scarlet Witch and Quicksilver get powers in Age of Ultron?

[Note: SPOILERS lay ahead, so proceed at your own risk.]

As aforementioned, Marvel moviegoers may remember Quicksilver for his brief but scene-stealing appearance in X-Men: Days of Future Past — though he was played on that occasion by Evan Peters. (If you were paying close attention to the film, or happened to be sitting next to a major comic book fan, you might have noticed Scarlet Witch appear very briefly as well, but she wasn't really a part of that film at all.) Considering it's pretty unusual for characters to overlap in the Avengers and X-Men movies — which Business Insider explored in an in-depth article — Quicksilver and Scarlet Witch's stories are much different in Age of Ultron. While the twins are considered mutants in the X-Men franchise, that term is reserved for those films, so Marvel and Disney had to give them a new origin story to explain their powers. Additionally, they are not Inhumans — the race of superhumans that populate the Marvel Universe — as some fans expected, but something different. So, what are they?

In the X-Men franchise, the twins are fathered by Magneto (played by Ian McKellen and Michael Fassbender in the films). However, Age Of Ultron gives them a different family history. It establishes that Magneto and Scarlet Witch are Eastern European, hailing from the fictional country of Sokovia. They had a normal childhood before they were orphaned at age 10, as the result of a bomb explosion — tragically, it destroyed their home, killed their parents, and trapped them under rubble for days. As a result of this traumatic event, they grew up very close and rebellious, only loyal to each other.

When they grew older, the duo volunteered to become a part of the terrorist organization H.Y.D.R.A., and they were promised experimental superpowers (aided by Loki's scepter) to reward their loyalty.

As seen in Age of Ultron, these experiments went awry for other participants — but Scarlet Witch and Quicksilver were the only ones to survive. These dubious experiments gave Quicksilver his super speed, and they granted Scarlet Witch telekinetic powers. The twins aren't mutants, and they aren't Inhumans; instead, they are referred to as "enhanced." They begin the film working on the side of Ultron, though they eventually turn on him and fight on the side of the Avengers.

Though it was presumably difficult to work around the X-Men guidelines, Joss Whedon said he needed the characters because they were fresh and interesting, with a lot of emotional depth. As depicted in the film, it seems Whedon suceeded.