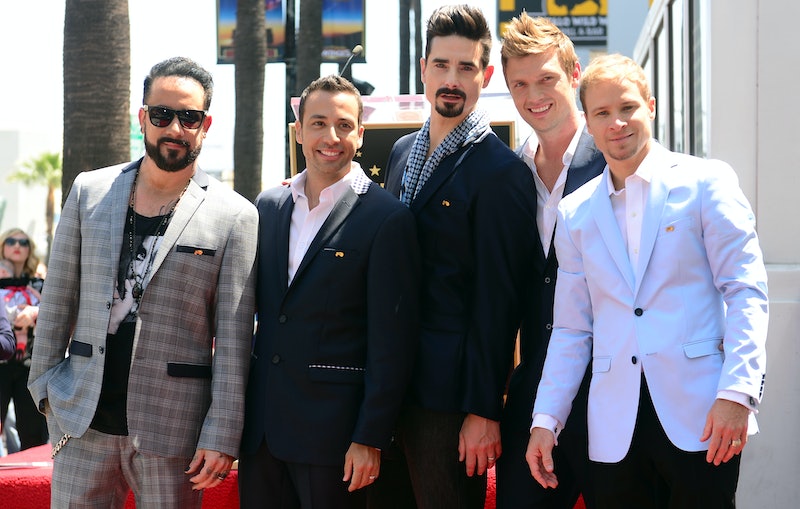 With the beginning of May comes so many things: spring, sunshine, flowers, birds chirping, and the "It's Gonna Be May" trend spreading like crazy across the Internet. For those who've been living under a rock, this very popular (and washed up) meme is thanks to *NSYNC's song, "It's Gonna Be Me." Fans of the song will recall how Justin Timberlake sings, "It's Gonna Be Me," but "me" sounds like "may." However, just because this is kind of *NSYNC's thing, that isn't stopping rival boy band Backstreet Boys from getting in on the May fun.

On Friday, the official Backstreet Boys Twitter account posted a photo of Nick Carter from the "As Long As You Love Me" music video with these words: "As Long As You Love May." I guess they felt left out? Maybe they're trying to upstage *NSYNC? I'm sure the band is just being funny, plus it adds to that whole boy band rivalary from the '90s and early 2000s. Whatever the case, it brings up an important question: who do you think wins at this May trend?

I don't know if we'll ever know for certain, but it's something that should be left up to hardcore *NSYNC and BSB fans.

As a fan of both bands, who do I choose? Well, I could easily go with *NSYNC, especially since it's the original "It's Gonna Be May," and I always prefer the original over the remake. However, I do love me some Backstreet Boys. Plus, I'm kind of sick of seeing Timberlake's face with "It's Gonna Be May" plastered all over social media. But, I'm going to choose neither.

That's right, I choose the third secret contender: Mae Whitman. Sorry, *NSYNC and Backstreet Boys. I loved both of you back in the day, but maybe we should let a woman have the spotlight this month?