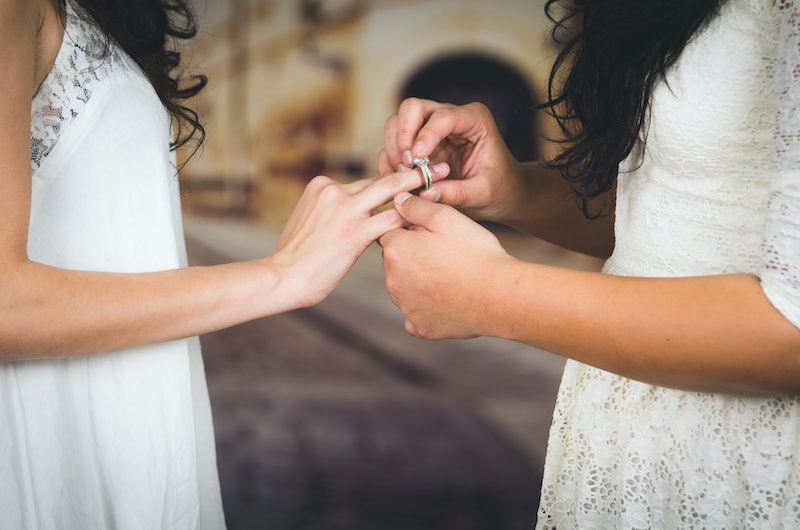 A little over a week ago, the Supreme Court heard extended arguments on the legality of federally sanctioned same-sex marriage. Plaintiffs representing four states — Ohio, Michigan, Kentucky, and Tennessee, each with constitutional amendments banning gay marriage — presented cases as to why these states should, they argued, be able to uphold gay marriage bans. And between this conferral and the time in which the court is expected to issue its ruling (late June), the plaintiffs, along with the American people, wait.

The deciding factor in this landmark civil rights case will likely be Justice Anthony Kennedy, whose past rulings have consistently swayed in favor of equality and dignity against legislation he felt "lacked purpose." For this reason, supporters of same-sex marriage are hopeful.

The latest SCOTUS appeals on gay marriage emerged from the court's June 26, 2013, ruling in the United States v. Windsor case, which nullified the federal Defense of Marriage Act (DOMA) based on its “wrongfully [denial of] federal benefits to same-sex couples.” But the decision as to whether or not gay citizens could marry at all was left in the hands of each state's government.

Right now, in order for members of the LGBTQ community to marry, their state has to recognize same-sex marriage as legally binding. Presently, 37 states do — 26 by court decision, eight by state legislation, and three by popular vote. But 13 states have bans on gay marriage — 12 by constitutional amendment and state law and one by constitutional amendment only. Among the 12 that actively ban same-sex marriage are the home states of the plaintiffs in the SCOTUS case — again, Ohio, Kentucky, Michigan, and Tennessee.

If you’ve not taken a moment to consider the rationale behind each "ban state's" argument, then allow me to quickly enlighten you on them.

On Thursday, November 6, 2014, an Ohio federal appeals court judge upheld the rights of four states (Ohio, Michigan, Kentucky, and Tennessee) to maintain same-sex marriage bans. Judge Jeffrey S. Sutton contradicted rulings by four similar courts when he upheld the bans, stating that "such a profound change to the institution of marriage" should not be made by "an intermediate court" like his, but by "the less expedient, but usually reliable, work of the state democratic processes."

On March 30, 2015, just before SCOTUS began hearing appellate-level arguments, Ohio’s Attorney General Mike DeWine re-emphasized Judge Sutton's point about the negative backlash that could arise from such a drastic change to the institution of marriage. He also added his own personal twist on the matter: "Any discrimination against [LGBTQ members of society] has been on a steady decline," he said. "[They] gain the attention of lawmakers now more than ever."

Essentially, what DeWine meant was this: gay people don’t need equal rights anymore because anti-gay discrimination has declined so much they’re no longer a minority worthy of “protected-class status.”

This is not the first time the argument that "gay people have too much power to be protected" has been used. House Republicans made the same assertion to support DOMA in 2013. A brief by the lawyer of the House of Representatives, Paul Clement, argued that the LGBT community are winning political battles left and right:

There is absolutely no reason to think that gays and lesbians are shut out of the political process to a degree that would justify judicial intervention on an issue as divisive and fast-moving as same-sex marriage.

John J. Bursch, the solicitor general of Michigan, argued on behalf of the state’s ban by claiming “the sexual union of a man and a woman produces something more than just an emotional relationship between two people — it produces, without the involvement of third parties or even a conscious decision, the possibility of creating a new life. Michigan’s marriage definition is designed to stabilize such relationships, to promote procreation within them, and to be the expected standard for opposite-sex couples engaged in sexual relations.”

Kentucky Gov. Steve Beshear's administration argued that the state's ban on same-sex marriage isn't discriminatory because it applies to straight people, too. "Kentucky’s marriage laws treat homosexuals and heterosexuals the same and are facially neutral," Governor Beshear said in a brief. "Men and women, whether heterosexual or homosexual, are free to marry persons of the opposite sex under Kentucky law, and men and women, whether heterosexual or homosexual, cannot marry persons of the same sex under Kentucky law."

According to Kentucky.com, attorneys for Beshear also argue that the privilege of marriage should be reserved for heterosexual couples because "only they can produce children, and the state needs population growth to thrive economically."

4. The Rationale Behind Tennessee’s Same-Sex Marriage

Joseph Whalen, the associate solicitor general of Tennessee, represented the state in the Supreme Court appellate arguments by opening with the following statement: "The legitimate interest of the state is to ensure that when children are born, particularly children who are born and the pregnancy is accidental, that they will be born into stable family units, i.e., marriage.”

Whalen’s argument went on to make use of flawed research studies to suggest that allowing same-sex couples to marry would somehow harm children. He stated that children need a "mom and a dad" in order to flourish in life. However, multiple studies spanning myriad social sciences have demonstrated that there is no difference in psychosocial outcomes between children raised by opposite-sex couples and those raised by same-sex couples.

What I find ironic is that Whalen failed to support his claim that children need to be in a "stable family unit" — one that consists of a mother and father — in order to thrive. Where are the statistics to prove that point?

Bonus: The Rationale Behind the Amici Brief to the Supreme Court

The group submitted its argument in an amicus brief, which opens with the definition of amici: they are "same-sex attracted men and their wives." These men write that they are sexually attracted to other men but choose instead to be married to a woman.

Here is their argument against gay marriage: Same-sex advocates fighting against gay marriage bans claim that a ban singularly discriminates against the LGBTQ members of society. The amici claim "that could only be true if the marriages of [gay men and straight women] are fakes and shams — which, these men assert, is simply not the case."

The brief also includes 10 testimonies from gay men and their wives to further support their case. The amici are adamant that they're not about gay conversion therapy; rather, they're about admitting their sexual desires and choosing not to act on them:

Bill Seger grew up in an age with little understanding about same-sex attraction. After many confusing years, he told himself, “Okay, this is it, I’m gay, I can’t do anything about it. I might as well just live it.” He pursued same-sex relationships, but never felt right. “I wanted to have a family. I wanted to have children and a wife. That was a big issue for me through all this time: family, family, family.” Bill and his wife Louise have been married for more than thirty years, and are the parents of three and grandparents of five.

As previously mentioned, the SCOTUS decision may very well be left up to Justice Anthony Kennedy, who managed to spur unease in gay marriage advocates during the appellate-level arguments by reminding the court that "this definition [of marriage] has been with us for millennia. And it's very difficult for the court to say, 'Oh, well. We know better.'"

Fingers crossed Kennedy is going to rule on the side of progress this time.