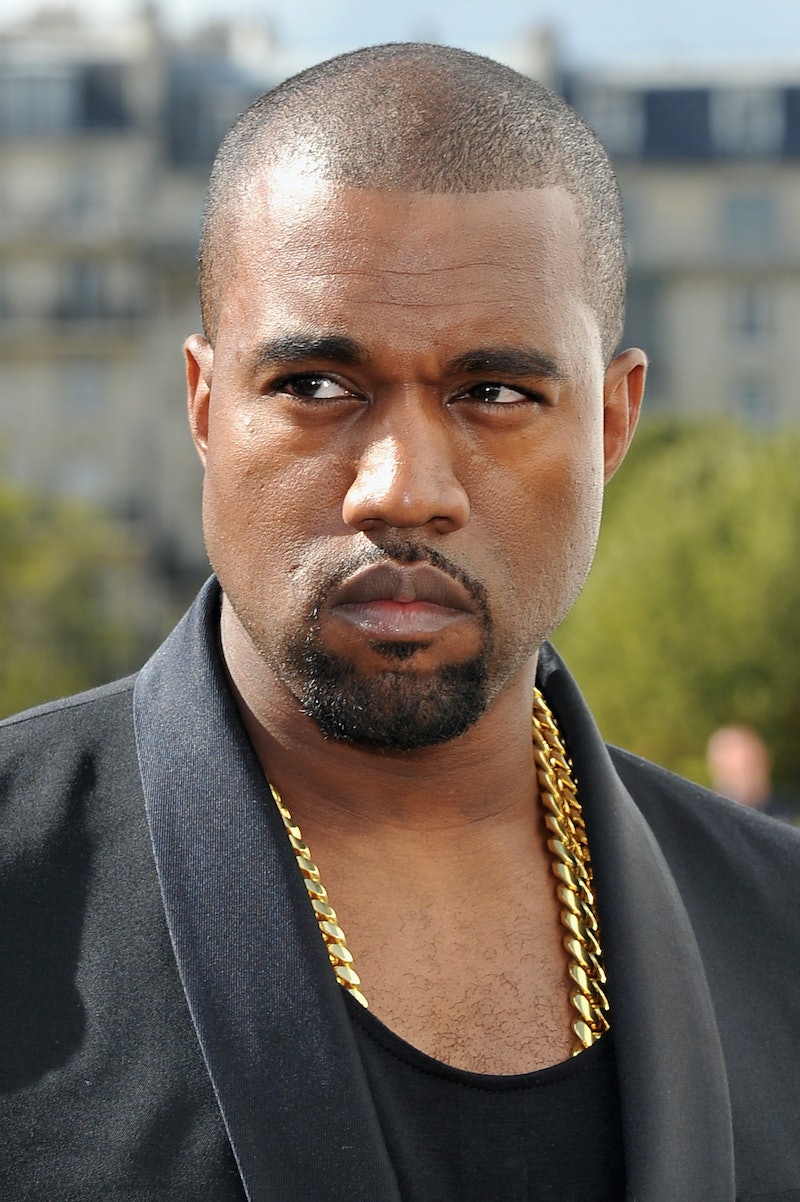 How do you solve a problem like a Kanye? How do you catch a Yeezus and pin it down? Apparently you can pin it down, it's just the whole building-it-up part that's hard. By that we mean, Kanye West has turned postponing concerts into performance art thanks to his own egomaniacally unrealistic expectations. That's right — the rapper has gone ahead and postponed several concerts due to technical hullabaloo, including Vancouver's show for the second time. Hey Kanye: your friends at Saint Laurent and Martin Maison Margiela will tell it to you true: sometimes less is more.

Previously, the rapper half of Kimye called off the first attempt at a Vancouver tour date on October 20, following what crew members allegedly called a "logistical nightmare" — referring to the tour's out-of-control set. And well, ornate doesn't even begin to cover it: Kanye is traveling with a goddamn mountain. A MOUNTAIN! Rome wasn't built in a day and neither were the mountains, Kanye. So it's no surprise you're having technical difficulties, really. Time to pump the breaks.

The Yeezus tour has, thus far — and unsurprisingly so — been a bit of a nightterror (Happy Halloween, you guys). After the tour's kickoff stop in Seattle on October 19, the Vancouver date was cancelled. Shortly thereafter (Wednesday), Anaheim's Friday concert was postponed. And now, history repeats itself with the October 20-turned-30 concert date pushed all the way to December 13. And just to ice these little shitcakes? They've also postponed Detroit, Denver, and Minneapolis' dates as well.

The announcement, posted to the Honda Center website, stated the show was cancelled due to "production logistics." Previously fans were told that Kanye’s show would not go on due to "unforeseen circumstances."

But obviously, once behind the scenes, the circumstances become increasingly clear: the set was a calamitous undertaking with insufficient practice time for set up and take down. At least, according to stagehands handling the Seattle show. Carting around a massive oval video screen and a 33 feet tall mountain will do that to a tour, though.

And then it was announced that the circular screen was broken! Already! This does not bode well for Yeezus.

In a press release, West's publicist stated it thusly:

Yesterday, on the road to Vancouver, a truck carrying The Yeezus Tour’s custom-made video truss and 60-ft circular LED screen was in an accident that damaged the gear beyond repair.

As a result of this event, it is impossible to put on the show and The Yeezus Tour will be postponed until these essential pieces can be reengineered and refabricated.

Kanye West will not compromise on bringing the show, as it was originally envisioned and designed, to his fans.

The Vancouver, Denver and Minneapolis dates have been postponed. Further details on the affected tour dates will be announced shortly.

So that's a thing.

And just so we're clear, 'Ye: Perfectionist behavior very quickly turns into disrespect when you consider how many thousands of people stuff like this inconveniences. The money and time it costs them. And to do it to the same city not once but TWICE in the same month? Cold, Kanye. Inconsiderate and cold. And THAT'S why people think that regardless of all your talent, you're still just a dickbag.

More like this
Kim Kardashian Father’s Day Tribute To Kanye West Called Him “The Best Dad”
By Stephanie Topacio Long
Taylor Swift's “Carolina” Theme For 'Where The Crawdads Sing' Soundtrack Is Here
By Jake Viswanath
What Is Elvis Presley’s Net Worth? How The King Earned & Spent His Fortune
By Grace Wehniainen
Big Freedia Reveals The Real Meaning Of Beyoncé’s “Break My Soul”
By Radhika Menon
Get Even More From Bustle — Sign Up For The Newsletter