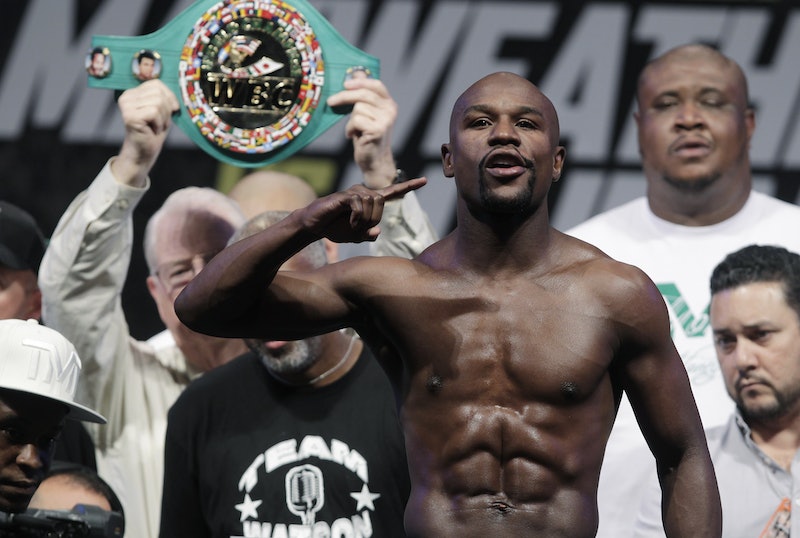 Tonight's fight between Floyd Mayweather and Manny Pacquiao is garnering an incredible amount of attention, both for the skill of the competitors involved, the amount of money at stake, and the troubled history of one of the contenders. Mayweather, a professional boxer and a five-division world champion, has allegedly committed egregiously violent crimes against women. The celebrated boxer past is peppered with alleged domestic abuse charges, some of which were dropped, some of which resulted in two months in jail, and a current civil lawsuit. Mayweather even allegedly struck his daughter’s mother's in the face with a car door, and punched her in the neck before fleeing the scene. In short, the allegations aren't...great, but it hasn't stopped Mayweather from enjoying an ever-more-successful career.

Despite knowing his status as a serial batterer, a record number of people plan to watch tonight's fight. Even if they aren’t rooting him, their are consuming the entertainment he provides, which is, in a very tangible, your-pocket-to-his-hand way, still supporting him. This, unfortunately, is not shocking. The fact is, we live in a country where being an abuser doesn’t disqualify a man from being placed on a pedestal on the forefront of culture. Crimes against women are kept hush-hush, so long as as those who committed the crime continue to provide us with entertainment.

There is no question that what Mayweather has been accused of doing is horrendous and inexcusable, and, if all the allegations against him are true, he should face retribution for the mental and physical crimes he has committed against women. But do we ever stop to question our own complacencies in these moments? That these issues might be larger and more complex than a single man and his actions, and that by consuming the most popular forms of entertainment we are supporting industries that sweep battered women under rugs woven from images of hypermasculinity? Mayweather is far from the only domestic abuser whose product we consume when we turn on our televisions, or listen to music, or even flip through magazines. He’s getting attention now because he is relevant, but after he faces Pacquiao, discussion about his abusing history will surely fade into the background.

Again, none of this is particularly surprising. In fact, the public's relationship with Mayweather, and our willingness to turn a blind eye to his problematic personal life in the face of getting the good show we want from celebs, is nothing is not entirely typical. Instances of celebrities being abusive towards women aren't new at all. We see this pattern again and again, and there are plenty of celebrities that you might not have known committed domestic crimes against women.

In 2011, Nicolas Cage was arrested for domestic violence after being accused of pushing his wife in public. Granted, no one likes Nicolas Cage or the movies he makes these days, but still, the point stands.

Sean Penn was arrested for the domestically assaulting his then-wife Madonna in 1988. He plead guilty to a misdemeanor and then went on to enjoy decades of professional success.

Mel Gibson was charged with battery against then-girlfriend Oksana Grigorieva in 2010, and was subsequently sentenced to three years probation, domestic violence counseling and two days of community service.

In 2014, Short was charged with attacking his wife in front of his children. To be fair, Shonda Rhimes straight up fired his ass after that. Not everyone escapes professional consequences for domestic violence, proving yet again, that we would all be well-served to follow Shonda's lead at basically all times forever.

In 2009, the former Two and a Half Men tried to choke his wife and was arrested on domestic violence charges. This was just the latest in a decades-long history of allegations of some pretty heinous abuse. Sheen is one famous person who, as much as any celebrity ever will be, has seen his public image tied closely to his abusive record (but damn if we still didn't let him have a top rated show for years).

Seagal's ex-wife claims that he was abusive throughout their relationship, and he has been sued for both sexually harassing and assaulting women on his sets.

Tommy Lee was arrested for domestic violence in both 1994 and 1998 for battering then-wife Pamela Anderson. I'm not sure how he still makes money off of being famous, but he does, which just goes to show you that famous people don't even have to be likable or even particularly talented in order to still make a living off of their fame after allegations of abuse.