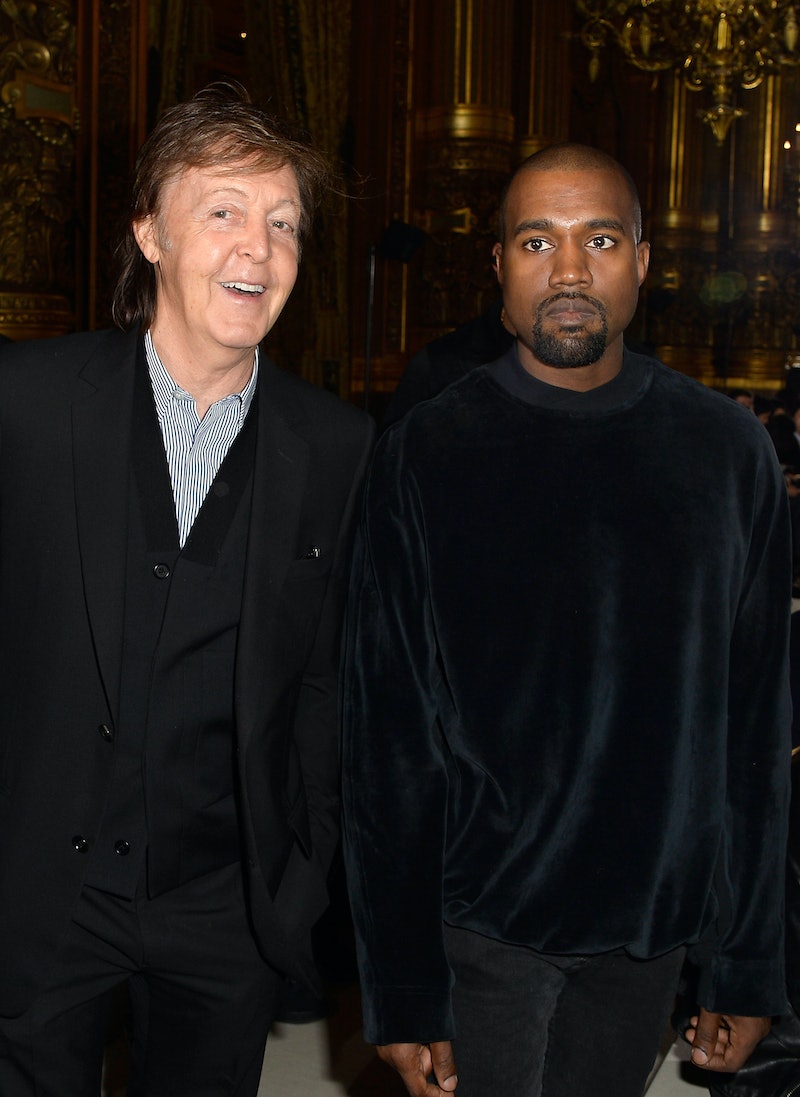 Back in January, Kanye West managed to elicit a chorus of heartfelt “Awwws” when he released a brand new song, “Only One,” featuring Paul McCartney. Most of the cooing and sighing had to do with the fact that the music video featured West sharing one-on-one time with his daughter North. While the cuddly toddler interacting with her loving father definitely tugged at the heartstrings, Kanye West's “Only One” lyrics are quite the tear-jerkers all on their own — apparently based off of what West imagines his mother might say to him about the birth of his daughter, and his new, happy family. As if the song couldn’t get any sweeter, however, McCartney recently revealed during an interview with The Sun that “Only One” was inspired by “Let it Be,” The Beatles’ legendary 1970 track that also served as the title for their 12th and final album.

According to McCartney, the collaborative effort of working with West reminded him of working with John Lennon. He also revealed that he and West bonded over sharing stories about their late mothers. After McCartney told a story of how his mother came to him in a dream, West decided to incorporate that concept into "Only One."

So now that we have that interesting tidbit of information (which definitely offers more insight into West and McCartney’s creative process), how do the lyrics from “Only One” compare to “Let It Be”?

"Only One" opens with the lines, "As I lay me down to sleep/I hear her speak to me/Hello 'Mari, how ya doin'?/I think the storm ran out of rain, the clouds are movin'." Coming from West, these lyrics are inspired by his late mother Donda, who seems to be serving as his spiritual guide. After listening to the intro for The Beatles' "Let It Be," it's clear to see how West's version is a more expanded, personal version of these lyrics: "When I find myself in times of trouble/Mother Mary comes to me/Speaking words of wisdom/Let it be."

When The Beatles sang, "And when the night is cloudy/There is still a light that shines on me/Shine until tomorrow/Let it be," there's definitely a message of encouragement and a sort of "keep on keepin' on" sentiment that runs parallel with this line from West's "Only One: "Hello, my only one/Just like the mornin' sun/You'll keep on risin' 'til the sky knows your name/And you're still my chosen one/Remember who you are."

SIGH. If the video for "Only One" doesn't make you cry, McCartney and West's emotional lyrics will definitely summon the tears. Listen to the tracks and compare below:

The Beatles' "Let It Be"

More like this
Joe Alwyn Reacts To Taylor Swift Earning An NYU Doctorate In A Rare Interview
By Jake Viswanath and Nicole Pomarico
Harry Styles Addresses The Theory That His New Song "Daylight" Is About Taylor Swift
By Jake Viswanath
The Very Best Quotes From Dr. Taylor Swift’s NYU Graduation Speech
By Grace Wehniainen
Pete Davidson Mentioned Kanye West & Ariana Grande In His Last 'SNL' Sketch
By Grace Wehniainen
Get Even More From Bustle — Sign Up For The Newsletter