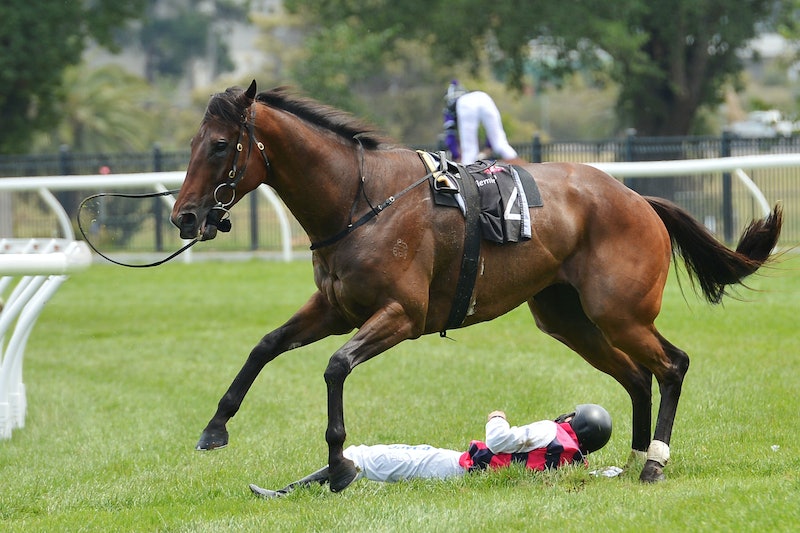 On Saturday afternoon, professional jockey Luis Saez trotted his colt Itsaknockout onto the flats of the famed Churchill Downs track with a heavy heart. Just seven short months ago, in October 2014, 17-year-old brother and fellow jockey Juan suffered a fatal head injury after being flipped from his horse, Montezuma Express, during the eighth race of the Indiana Grand in Shelbyville, Indiana. Since the tragic accident, 22-year-old Saez has publicly dedicated the last of his three wins to Juan, wearing his brother's necklace in his honor. The Saez brothers' story, however, isn't a new one: according to official Jockey's Guild records, there have been over 150 rider deaths since 1940, leading many outsiders to wonder just how safe horse racing really is.

"Just getting on the horse, I was thinking of him," said the Panamanian-born Saez of his brother in an interview with The Sun-Sentinel in February. "He was as good a brother as you could have."

"Juan was such a talented and sweet kid, with a promising future," added Guild Chairman John Velazquez in a comment to The Courier-Journal following Juan's death in October last year. "We are competing against one another on the track, but off of the track, we are all very close."

Horse racing has always been a dangerous sport for both the jockeys and the horses they ride, but like professional football, the question of just how much can be done to prevent tragedy has recently come under question.

"In the last 15 years of my time in the racing industry I heard [sentiments like, 'It's just something that happens'] from many others," said Peta Hitchens, researcher in Animal Welfare & Epidemiology at Swedish University of Agricultural Sciences, in a paper for the academic journal The Conversation. "It dangerously fosters a sense of complacency that these tragic incidents cannot be prevented."

Hitchens' sentiment is shared by many. Improvements to protective gear and "policies and procedures", she said, could vastly improve the statistical likelihood of a fatal accident for both rider and horse.

In March 2012, The New York Times reported on late champion jockey Jacky Martin, whose horse Phire Power threw him during a spill at the Ruidoso Downs Race Track in New Mexico in September 2011. After lying motionless on the track, with a frightened and panicked Phire Power 19 seconds after leaving the gate, doctors carted Martin to University Medical Center in El Paso, Texas where he was declared paralyzed from the neck down. Phire Power was euthanized there on the track and Martin received a sum of $60 for his troubles.

The Times reported that a virtually identical accident occurred on the same track the next day, with much darker ends for the horse involved, Teller All Gone, whose euthanized body was found near a dumpster a few days later. Fearful for their lives, two of the jockeys at the track that week refused to ride their mounts, citing concerns over rider safety.

After the death of 19-year-old jockey Caitlin Forrest last October, former racing trainer Lee Freedman Tweeted that the problem in many of these sad cases might have do do with field precautions and pre-race inspections.

"We must ... look [at] field sizes and take a whole new approach to interference," said Lee, who urged reduced field sizes and more veterinary guidance before and after races.

Look harder at pre race vetting. If every runner is vetted pre race surely this is a positive. Cost is irrelevant. Time drastic change.

Jockey Dom Tourneur agreed, Tweeting, "I believe that more stringent testing by vets is necessary prior to horses racing as too many incidents are occurring."

So far, this year's Derby has gone off without a major hitch. Saez, for his part, attributes his relative calm in such a dangerous field to the memory of his brother.

"The other night, I saw him standing there in front of me, and he said, 'Don't worry, I'm fine,'" Saez told The Sun-Sentinel. "That made me feel better."