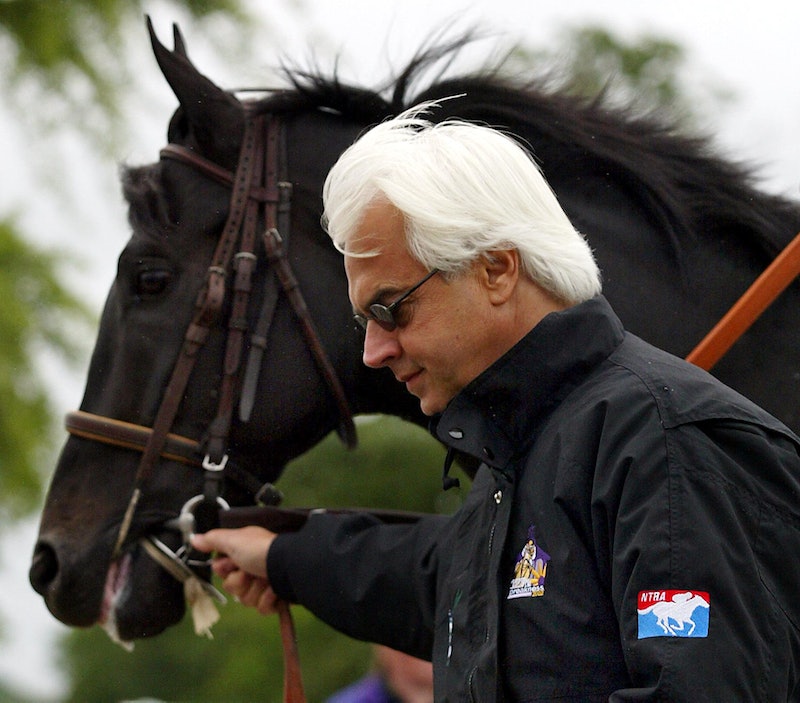 This year, two of his horses competed in the Kentucky Derby — and both were heavily favored to win it all. Bob Baffert, trainer of American Pharoah and Dortmund, had three Kentucky Derby victories under his belt, and he got his fourth this year with American Pharoah. The first time Baffert won was in 1997; the most recent was in 2002. Baffert, 62, has been participating in the sport of horse racing for more than two decades, and in 2015, he came in bringing a 1-2 punch.

The last time a trainer won both first and second place in the Kentucky Derby was in 1948, when Ben Jones earned first with Citation and second with Coaltown. Baffert was hoping to make a mark this year with American Pharoah and Dortmund. He told the Associated Press:

We just have to contain ourselves. It's exciting coming in here with two good horses.

In 2009, Baffert was inducted into the National Museum of Racing Hall of Fame for his accomplishments. His three Kentucky Derby wins were with Silver Charm, Real Quiet and War Emblem; he's won the Preakness five times; and he's taken home a victory at the Belmont once. The native of Nogales, Arizona, had earned more than $195 million with 2,387 victories by August 2013. He told the Associated Press about horse racing:

"I thought, 'This is fun, this is easy.' When you get older, you start appreciating it more and you realize, 'Boy, this is really tough.'

Although Baffert had favorites in the Kentucky Derby this year and is a well-known and excellent trainer, he's not without controversy. Baffert came under scrutiny a couple years ago in what The Boston Globe calls "dark days" for the trainer. Seven of his thoroughbreds died in the span of about a year and a half — between November 2011 and March 2013. But the California Horse Racing Board cleared him and everyone else of any wrongdoing, stating that there was "no factually based explanation" for the horses' deaths. Baffert told The Los Angeles Times he wanted to know just as much as anyone what happened to cause the sudden deaths, which were clearly not caused by racing accidents. They were healthy horses who returned to the barn and died. Baffert said:

They've taken thousands of tests. We've checked the paint. We've had in the best environmentalists. The horses get the best food, the best care. ... It's a complete mystery.

The owners who worked with Baffert at the time all kept him on as a trainer, which says a lot about their faith in him. Baffert is one of the most successful trainers in the world, The LA Times writes. And according to Baffert's website, his Hall of Fame designation is well deserved.

Through the years, Bob Baffert has registered numerous major stakes victories, earned a multitude of awards and received accolades galore, all stemming from his drive to succeed and his knack of being able to elicit the very best that an equine athlete has to give.

Baffert, known for his pure white hair and trademark sunglasses, has been one of the most recognizable figures in the horse racing scene for years, if a 2002 article by The New York Times is any indication. He's come up short of winning the Triple Crown a couple times, but with the winner of 2015 Kentucky Derby, he's got a bit of a better chance this year around, though it's an incredibly difficult feat. But if there's one person who could do it, it'd probably be Bob Baffert. Many, many years ago, Baffert's friend, horse owner Mike Pegram, gave Baffert $300,000 to buy some thoroughbreds. He later said:

First of all, I liked the guy, Second, he had ambition and a tremendous eye for spotting a talented horse. No one else needs to like the guy, but you have to respect his horsemanship. Next to selling hamburgers, giving the money to Bob was the smartest investment I ever made.