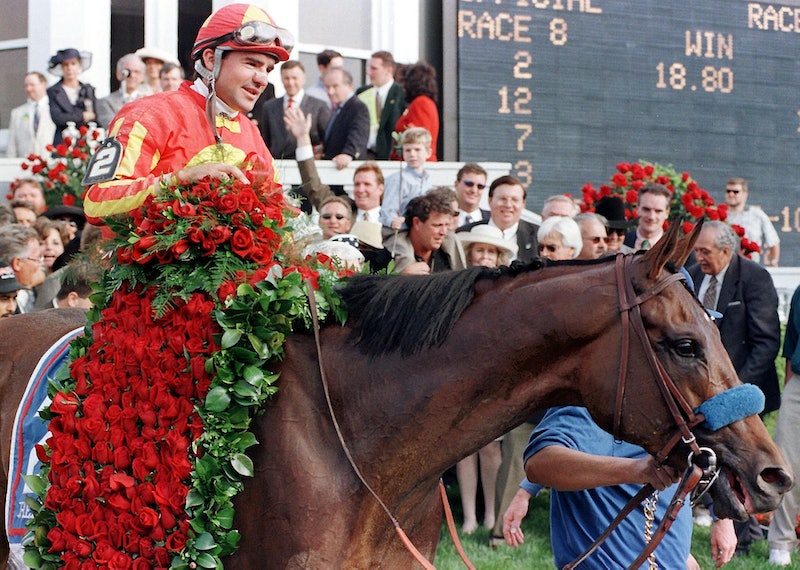 It's customary for the winning colt or filly at the Churchill Downs-based Kentucky Derby to receive a wide garland of roses (one that they hopefully won't eat first). As the owners and trainers hoist shining trophies above their heads and the jockeys tote a bouquet bigger than themselves to the winner's podium amidst a chorus of congratulations and back-slapping, the young horse is blanketed with the deep red blooms — a practice that stems back to 1896. But it wasn't until 1925 that the tradition really began to catch on.

"The roses were first established as part of the Derby celebration when they were presented to all the ladies attending a fashionable Louisville Derby party," explain Derby officials on their site. "The roses were such a sensation, that the president of Churchill Downs, Col. Lewis Clark, adopted the rose as the race's official flower."

Since the first year the iconic flower was presented to the winner as a pink and white arrangement in 1896, the tradition has snowballed, picking up extra fanfare in 1925 when columnist and former Churchill Downs president Bill Corum coined the phrase "Run for the Roses" in reference to the annual opener of the Triple Crown series.

According to Derby officials, the garland blanket as we know it today first appeared in 1932 and is made up of some 400 fresh red roses and sewn to the beloved green silk by hand by Kroger Master Florists. In an interview with CBS affiliate WLKY on Friday, Floral Manager Carol Belser said,

For Kroger to be a part of this event, we are so privileged. It’s an honor to be part of the making and crafting of the rose garland, because of the tradition of the Kentucky Derby and how it relates to Kentucky. This is what we stand for.

It's not an easy job, picking just the right blooms. Belser explained that the florists have to sort through over 7,000 red roses (ouch — thorns...) to find the perfect ones of the bunch. From there, it takes nearly seven hours to apply the roses to the green backing, adorned with the commonwealth seal.

Stars and attendees got in on the rosey action this year too: figure skater and NBC sports announcer Johnny Weir showed up to this year's pre-race festivities wearing his own version of the prominent red garland atop his head as a hat, complete with a miniature version of the Derby's signature mint julep.

Despite it's size — the famed red-rose garland is 122 inches long, 22 inches wide, and weighs nearly 40 pounds — this year's winner, American Pharoah, seemed to have very little problem in his excitement sporting it victoriously down the track.

More like this
Starbucks' Summer Menu Includes A New Chocolate Cream Cold Brew
By Emma Garza
Chelsea Woody On Shattering Stereotypes In Surfing
By Leah Groth
Jake Daniels Just Became The UK’s First Active Football Player To Come Out As Gay Since 1990
By Sam Ramsden
What Is Jeanie Buss' Net Worth? The Lakers President Is Uber Rich
By Hugh McIntyre
Get Even More From Bustle — Sign Up For The Newsletter