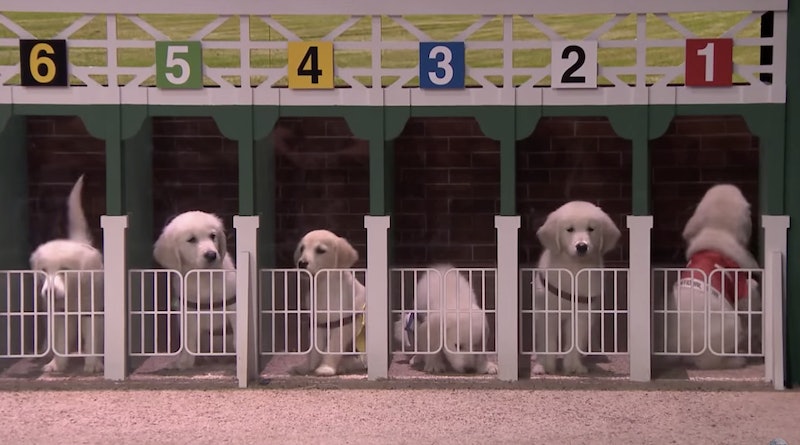 American Pharoah was named the champion in Jimmy Fallon's Puppy Predictor for the 2015 Kentucky Derby. In an adorable feat of pure athleticism — just kidding, it was a short sprint to a trough full of food — 16 puppies vied for the top title and predicted which horse will win the Derby this year. And the winner was unsurprising — American Pharoah was actually already the most favored horse to take home the victory, which he did. So, if you planned to gamble based on Fallon's predictor, well, it was a pretty safe bet. The second and third place puppies are long shots but not impossibilities, though, with wild card Mubtaahij (12:1 odds) and Far Right (40:1 odds).

The puppies started out mostly raring to go, save a few who were more interested in taking a nap than exerting energy to run in a big crowd for food when there will be plenty of leftovers anyway (I feel you, guys). Number 4, representing American Pharoah in a stunning yellow bib, quickly made his way to the finish line, rewarding himself with beaucoup snacks once he arrived. The group of baby yellow labradors might well be your favorite thing about the Kentucky Derby, so let's break it down step by step.

Fallon introduced the puppies one by one, and American Pharoah was already raring to go.

War Story, on the other hand, was just not having it.

Gary Frick Jr., Fallon's own dog, represented Stanford (who actually is no longer in the race), and he also was completely uninterested in the race. Fallon gave it his best effort to no avail, saying, "Gary, you wanna wake up for this one? Gary? Gary, you wanna get up? It's the big race. The Kentucky Derby. This is the one you've been waiting for all ... yeah."

Fallon went on with his puppy pep talk anyway, telling them, "I wanna see a fair race. No peeing or but sniffing, got it?"

The Roots kicked off the race with some fanfare.

And they're off! American Pharoah had an early lead.

He crossed the finish line with ease.

Whether or not the puppies are completely accurate predictors, they're sure cute. Do I dare say they're cuter than the actual horses in the race? I do. I do dare.