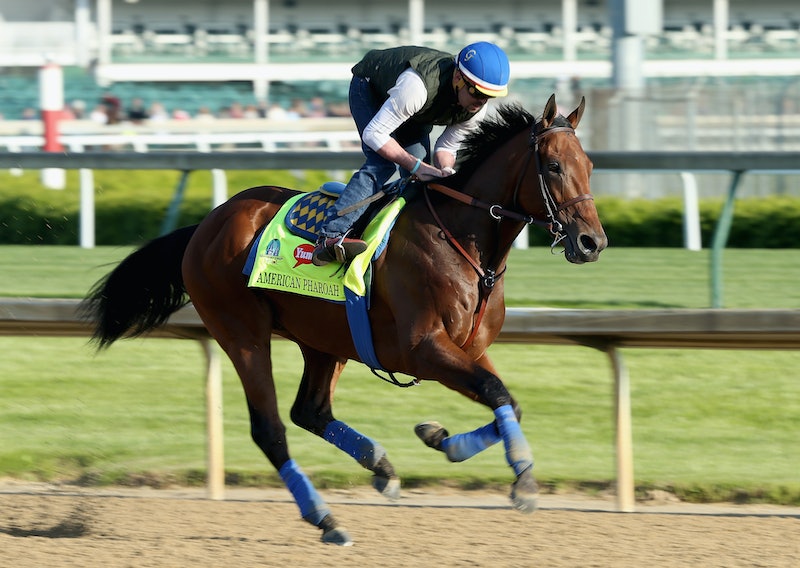 The scrappy young colt who took home the Kentucky Derby win on Saturday has a lot to celebrate. As the champion of the Churchill Downs' biggest race of the year and the first leg of the prestigious Triple Crown series, the feat was anything but easy. As owners, trainer, and rider all ascended the winner's platform to waves of applause, reporters peppered them with obvious inquiries: "How does it feel to win your second Derby in a row?" and "What does this win mean to you?" were most popular, of course. But of all the questions plaguing race-fans, perhaps the most peculiar was why the sweet-natured 3-year-old American Pharoah didn't quite have a tail.

The excitable colt certainly has personality and more than enough shine to make him stand out on his own. Upon his win Saturday evening, jockey Victor Espinoza admitted that he hadn't tried to control American Pharoah as much as usual, opting instead to "let him run".

"I feel like the luckiest Mexican on earth," Espinoza told reporters, trotting the champion along the track after crossing the finish-line to grand revelry in the stands. According to trainer Bob Baffert, Espinoza only ended up riding American Pharoah after other jockeys had passed on the late-finishing "problem child" colt.

"War Emblem was a problem child," said Baffert, comparing his previous champion with Espinoza to Saturday's winner in an interview with The Los Angeles Times. "[Victor's] pretty good with those problem-child horses," said Baffert.

After time with Espinoza, American Pharoah's record began to improve. Coming into the Derby, he was already a 5-2 favorite. The biggest surprise upon his appearance Saturday, rather, was his missing tail. According to a report by the Associated Press, American Pharoah's usually flowing hair had been chewed off by another horse at the stables a few days earlier.

"We believe that his tail was ... bitten off by other [horses on the farm at home]," explained owner Ahmed Zayat in an interview with Brisnet Editorial on Tuesday. "[We were] told it was bit off by Mr. Z in the field." Mr. Z, of course, is American Pharoah's rival and farm compatriot, who owners say spent much of his youth in the same fields as his tail-free counterpart. It wasn't wholly surprising, said Zayat, calling Mr. Z the "complete opposite" of the young American Pharoah.

"[Mr. Z is a] completely different kind of horse — he always runs so hard," said Zayat. The gentle-natured American Pharoah, on the other hand, is such a sweetheart that he simply let Mr. Z do it, rather than retaliating, he explained.

Tail or not, Saturday's Derby winner is still a sight to behold: with his deep chocolate coat and soft brown eyes, the so-called "cuddly" American Pharoah is just happy to be with the humans he loves.

"He's the kindest, sweetest, cuddly horse you would want," said Zayat. "You literally want to cuddle with him." Zayat told the Editorial that from the moment they laid eyes on him, they knew the beautiful racer was a winner. Recalled an enamored Zayat:

From day one, when he was born, he was gorgeous. The way he was muscled, the way he's built, his gaskins, his hind end — you can tell that he's built different.