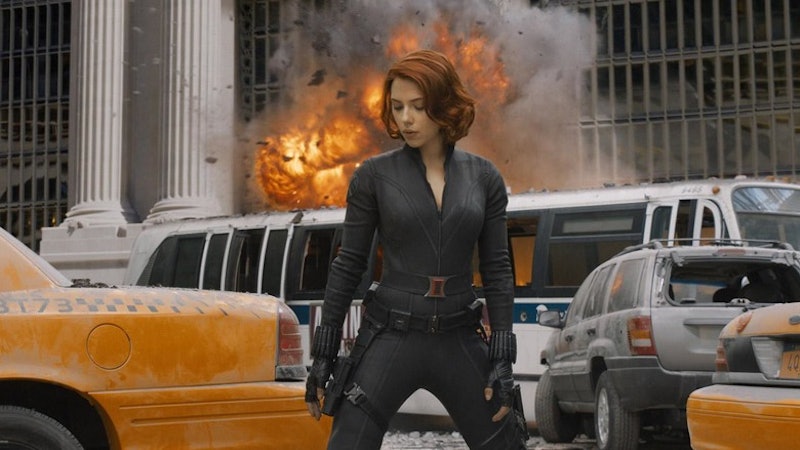 According to Saturday Night Live, Marvel knows girls! Yes, that Marvel... The one that is in dire need of a female superhero movie. On Saturday, host Scarlett Johansson and SNL cast made a Black Widow parody film which proved exactly why we need a female superhero movie: so we can end that pesky misconception that female driven movies need to be cliche-driven romantic comedies! So Hollywood, if you're reading, watch this sketch, and do the complete opposite.

The parody trailer for Black Widow: Age of Me, a true self-discovery film for Black widow, was really hilarious because it would truly be the biggest nightmare of a movie for a female superhero. It was filled with sexist tropes that so many rom-coms use (unfortunately). The good news in all of this? SNL is definitely aware that this would be a terrible movie for Black Widow, so they really hammed it up for dramatic effect.

The parody had all the makings for a cliche rom-com. It had the beautiful girl in the big city, and even bigger apartment — that would definitely not be in her budget, but that's neither here nor there —, landing her dream job at a fashion magazine. Of course on her commute to her first day at the big job, Black Widow breaks her heel because she's just *so* clumsy and quirky.

So Black Widow's got the dream job, dream apartment, dream friends (Sassy Thor), but the only thing missing from her life was love.

Will she find love and then truly become happy? (Ugh.) She thinks she's found it with Ultron, who ignites a certain fire in her, but that would be too easy for a romantic comedy, right? Unfortuately, Ultron and Black Widow aren't a match made in Marvel because he blows up her entire work building. But don't worry! The movie will play James Blunt's "Goodbye My Lover" to let us know exactly how heartbroken and hurt Black Widow is before she decides to run off to Paris to escape the pain.

But will she realize love might have been right in front of her this entire time in the form of the Incredible Hulk? If Marvel,and the writers of 27 Dresses, have anything to say about it... YES.